Ever wondered how many branded fast food and coffee shops there are in your town?

Figures collected by the KM Group show there are almost 200 outlets in Kent bearing some of the world's most recognisable logos.

With so much choice around the county, including restaurants and outlets selling other fast foods such as pastries or sandwiches, we've narrowed our brand search to three coffee chains and three classic fast food chains.

Scroll down for audio and interactive map

They are Caffe Nero, Starbucks and Costa, and McDonald's, Burger King and KFC.

Medway had the highest number of brands, with 24 overall, followed by Maidstone with 23 and Dartford with 21.

But Gravesham has the fewest, with just five stores in total.

Costa was the most popular coffee chain, with 69 sites around the county, while McDonald's came out on top for fast food chains with 38 sites.

The figures include motorway service areas and travel terminals. 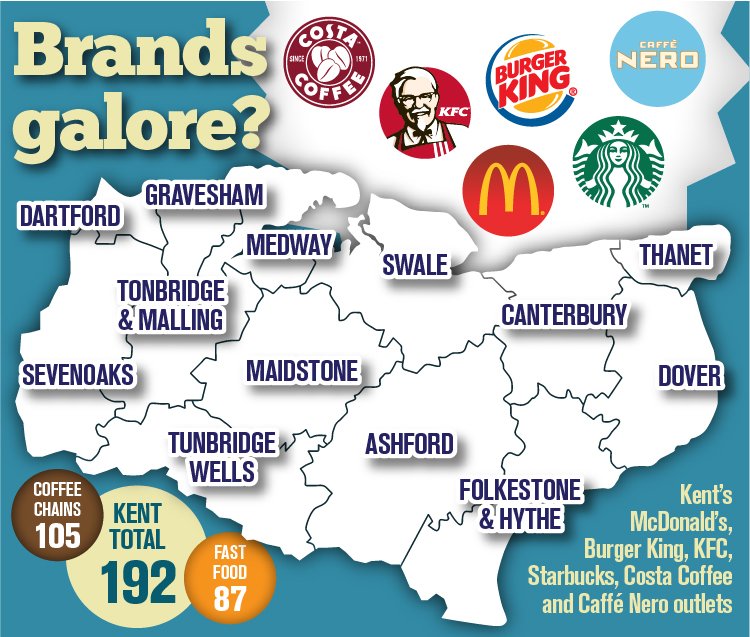 Combined, there were 105 coffee stores under these brands and 87 fast food points.

Ashford and Dartford saw the most Caffe Nero's, while Canterbury, Medway and Swale had the most amount of Starbucks. The Maidstone area has the highest number of Costa's with 11.

Medway came out on top for all three fast food chains.

With so many housing and retail developments opening across our county, more stores appear to be on the way.

A spokesman for Caffe Nero said: "We currently have plans for two new sites in Kent and we continually review opportunities."

A McDonald’s spokesman said: “Kent is a key area of growth for us with a number of restaurants already in the pipeline and under contract and we continue to monitor for opportunities in the area.”

"These figures absolutely reflect the national trend and they always seem to follow urban densities as well, so seeing that Medway and Maidstone have got more than anywhere else is really what you would expect when you look at population centres.

"There's been a real fashion and upsurge for coffee consumption in the UK generally and the fast food outlets have really honed in on that.

"A lot of people say we have too many, but what retail will do better than probably any other part of the economy is follow customer supply and demand.

"On the whole, I would say it's helping the high streets."

Talking about independent chains, Mr Monk said: "There's a lot of people who will avoid the big chain stores generally and there are always people willing to support independent stores.

"People need a reason to go to the high street. They can stay at home and shop online, but people like to be sociable.

"It also makes shopping more enjoyable and less of a chore."

According to a 2014 study by Cambridge University, the average person encounters 32 takeaway restaurants near their home and their workplace and when travelling between the two.

Statistics from the British Coffee Association (BCA) show people in the UK drink 95 million cups of coffee every day - up from 70 million a decade ago - while the average person in Britain consumes around two cups a day.

Chris Stemman, executive director of the BCA, says this number of coffee shops in Kent is part of its wider popularity across the country: “In the last decade we’ve gone from a country of tea sippers who enjoy the occasional instant coffee, to a nation of seasoned coffee connoisseurs exploring a large variety of roast and ground blends.

"Coffee consumption has boomed across the UK and with so many choices on offer this increase is not surprising.

"Despite the fact there has been a growing increase in the consumption of fresh ground coffee, instant coffee still tops the list for our favourite type of coffee by a significant margin.”

"Over the past decade, there's certainly been a marked increase in the number of coffee shops appearing in all of our town centres.

"Interestingly enough though, over the past few years, there's been an increase in the number of independent tea shops, so it seems there's a rival appearing now."

She continued: "What people like less about brands is there isn't the flexibility. There's nothing different. No matter where you go across the county, it will be the same, and I think that's where these new independents setting up are starting to make a difference.

"But I think there's a place for both. With a brand you know exactly what you're getting, particularly if you're in a hurry. But if you've got a little bit more time, sometimes it's nice to have a choice. I think they complement each other.

"People do expect a brand. If there wasn't demand from consumers, then these well know branded outlets wouldn't be opening and growing at the rate they are.

"If people are coming into our town centres now because they recognise the brand, that's the important bit, because when they're there they are more likely to spend money in the other shops."