Fire crews fought a large recycling centre blaze which broke out in the early hours.

The fire started in the Viridor Transfer Station on the Cobbs Wood Trading Estate in Brunswick Road, Ashford, at about 3am.

Six fire engines and a bulk water carrier were sent to the scene and residents were warned to keep their doors and windows closed.

Alan Standing, station manager and the incident commander, said: "We received a call at 3.20am so we've been here a good number of hours now.

"We were called to reports of smoke in the area.

"On arrival the crews found a large open-sided warehouse that is used as a recycling plant, general household waste and commercial waste is dropped off here. There's a bay warehouse and within there we've got at least two bays of product that were well-alight."

The fire has been extinguished. 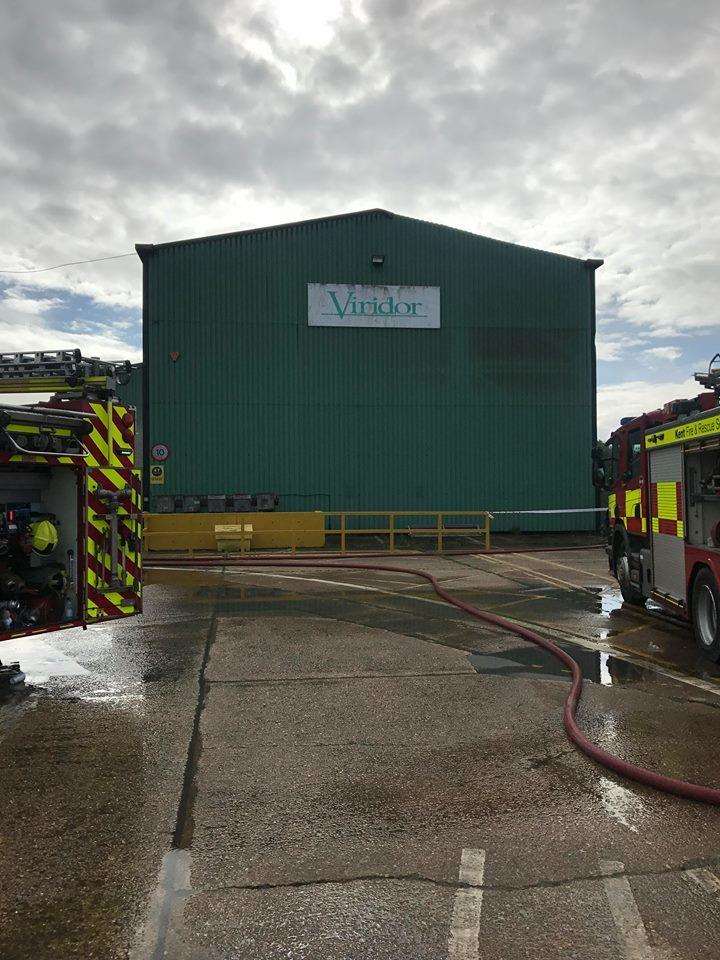 "Initially, at the height of the incident, we had six pumps here and a water bowser (bulk water carrier) which carries 14,000 litres of water. We were using a great number of human resources to get in there and put the fire out using breathing apparatus and main jets.

"We also had the environmental impact. We had a smoke plume going across the Ashford town centre so we put a warning form out."

He added: "We used water curtains, where we spray fine water mist up into the smoke plume which essentially captures some of the larger particles in the smoke to stop and mitigate the smoke plume going across and protect the environment and residents.

"At its height we had a lot of people and activity , we're now in the situation where we're scaling down to four pumps and getting in there now to utilise their plant machinery to drag the products that have been alight out so we can put it out fully. We've got the fire well under control, its now a case of getting to a very deep-seated fire and putting out fully."

Currently, fire services are using Viridor machinery to remove the debris from the warehouse and make sure its out.

Mr Standing said: "We're working very closely with Viridor to keep them informed at to where we are so there is some damage to the property but we've managed to limit that to a small amount as possible.

"No reports of any injuries on the site and at this time no cause to identify exactly what has happened."

Although the fire is now under control, it is thought that they will have to remain on site for 'some hours to come'. Environmental health teams have also attended.

A spokeswoman from Viridor Ashford transfer centre said: "A small fire broke out in the early hours of this morning at Viridor’s waste transfer station on the Cobbs Wood Trading Estate, Ashford.It was quickly and safely extinguished by the Fire Service, who remain on site as a precaution to dampen down the small volume of remaining waste.

"Our business operations continue as normal, although this small, little-used facility will remain closed for the rest of today.There were no injuries as a result of this morning’s incident and our well-rehearsed incident management plans were successfully enacted.