New pictures show the aftermath of a devastating industrial estate fire which blanketed a town in smoke.

The blaze happened at 3.20pm on Tuesday at the Cobbs Wood Industrial Estate in Ashford, with one casualty being taken to hospital.

Centred on LMR Tyre Recycling but also damaging a Biffa site and Channel Commercials, fire crews remain on the scene today and continue to damp down hot spots.

At its height, 15 fire engines attended as the billowing plume of smoke could be seen as far away as Seasalter near Whitstable.

A large number of tyres were stored at the epicentre of the inferno, which residents say gave it a distinct and widespread odour.

Nearby homeowners reported having black, oily spots land on their clothing - a phenomenon also experienced by children playing on slides in their gardens.

Compounding the issue was a fear that asbestos could have been present and burnt. 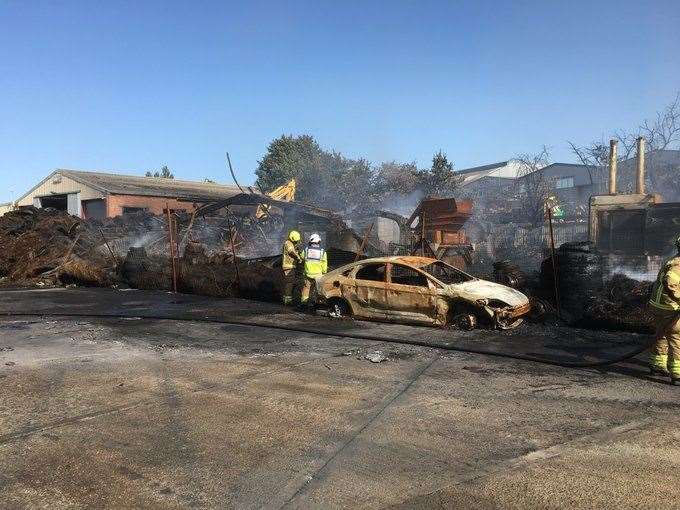 On the day, a fire service spokesman said: “Small amounts of asbestos may be present and we are working with the Environment Agency to reduce any potential impacts.

"As with any fire of this size, we are asking people living nearby to close windows and doors due to the smoke coming from the site.”

Keen Ashford photographer Andy Clark called it a "scene of devastation", but by 8.20pm on Tuesday fire crews reported they had made "steady progress" with the fire being "surrounded".

The newly-opened Curbside Cafe in nearby Brunswick Road provided free breakfasts to 30 firefighters to recognise their efforts throughout the previous day.

The fire service had had a busy day, as a two-car crash also happened on Brookfield Road, near Matalan, requiring an additional fire engine.

Furthermore, fires had also sprung up at Wildwood near Canterbury and at a Crayford warehouse.

In an updated statement today, a fire service spokesman said: "Three fire engines remain at Cobbs Wood Industrial Estate in Ashford, where crews continue to turn over and dampen down any remaining hot spots.

"People living and working in the surrounding area are still advised to keep windows and doors closed as a precaution, due to smoke coming from the incident.

"The cause is under investigation."