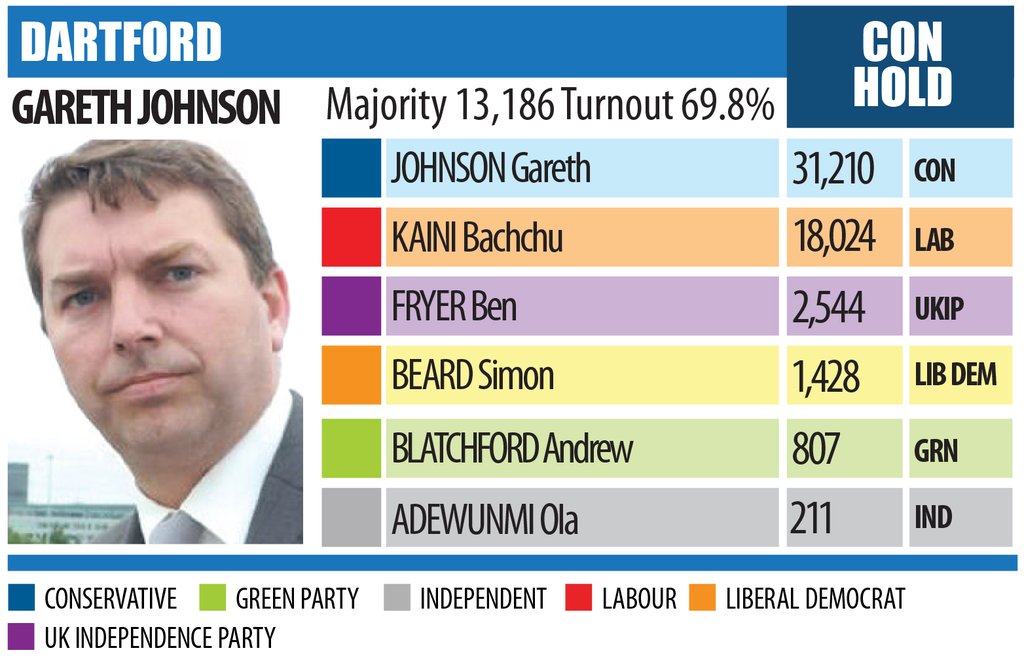 The ultimate slice of Dartford pub quiz trivia could be under threat as Conservative candidate Gareth Johnson’s re-election may not be lining up with the national picture.

Mr Johnson’s constituency was the country’s longest running bellwether seat - having swung with the government every year since 1964 - but shock wins for Labour across England appear to be leading to a hung parliament.

Despite the unlikely gains in other parts of the country, victory for Mr Johnson never seemed in any serious doubt and he in fact enjoyed an increase of almost 6,000 votes.

In fact most of the drama at Acacia Hall was provided by a spectacular lightning storm across Dartford on Thursday night, which caused a power failure and delayed the start of the count, with 69.4% of Dartfordians having turned out to vote.

It was testament to the team of counters making their way through the ballot boxes that the result ended up coming out a tad earlier than anticipated, at around 3am.

"What we wanted to do was explain why people should vote Conservative and that seems to have paid off,” said Mr Johnson.

"People were motivated by concerns over the Lower Thames Crossing. We had that decision secured east of Gravesend. People in Dartford were delighted with that and were sick to death of the congestion that we all know about, and here we had a solution.

"That solution was thrown into doubt halfway through the campaign when the shadow transport minister said he was going to look at all options including Dartford again for the location of the Lower Thames Crossing and that seemed to motivate quite a number of people to go out and vote Conservative."