Wembley remembered: The final part of a lookback at Deal Town's victory over Chippenham Town in the FA Vase final

In the final part of our Wembley special on Deal Town's FA Vase triumph former manager Tommy Sampson opens up about the struggles he's faced since that glorious day.

Former East Kent Mercury sports editor Graham Jones, who was there that day on May 6, 2000, also recalls the highs of the day and the aftermath.

“A momentous day in the town’s history”

Former East Kent Mercury sports editor Graham Jones was there to cover the historic moment and the aftermath.

He said: “Every football fan has those moments they will never forget - the games, the goals, the ecstasy of the highs and heartbreak of the lows. Sports journalists are no different.

“Deal’s FA Vase victory in 2000 may not have been the highest profile game I ever reported on at the old Wembley, but it is undoubtedly the most enjoyable and satisfying.

“The whole journey was one that those of us who were on it will never forget. It was the impressive quarter-final win against Molesey at The Charles Ground that had everyone really believing that a trip to Wembley could be on the cards. The semi-final first leg performance at Newcastle Town was as good as any from that Deal side, before they finished off the job at home.

“What happened then was something that those of us who were involved would never forget.

“There had been murmurings of discontent in the early months of the season that the team did not contain any local players but what manager Tommy Sampson had assembled, with the help of chairman Roy Smith’s financial backing, was quite simply the finest team in Kent League history.

“Tommy had taken his highly-successful Herne Bay side and added the best players around at that level, as well as some from above. Throw in experienced heads like former Wales international Steve Lovell, who reportedly became the first grandad to play in a Wembley final, and it was a potent blend. 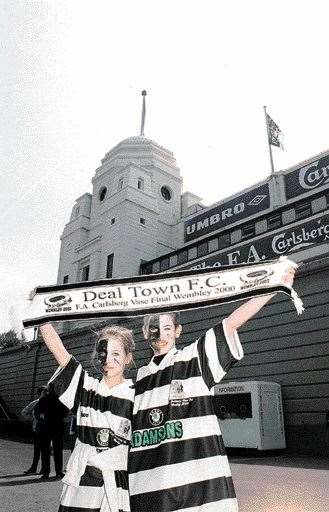 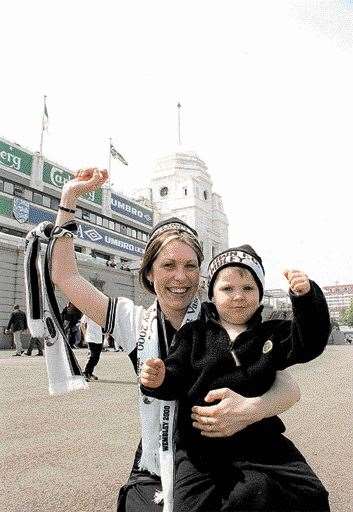 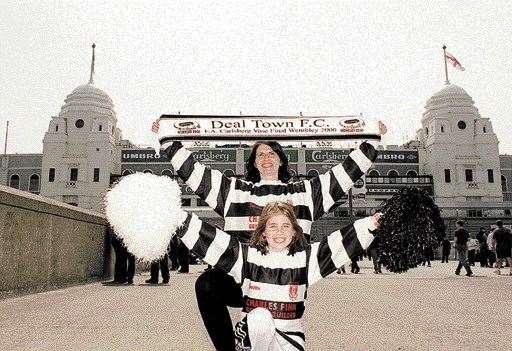 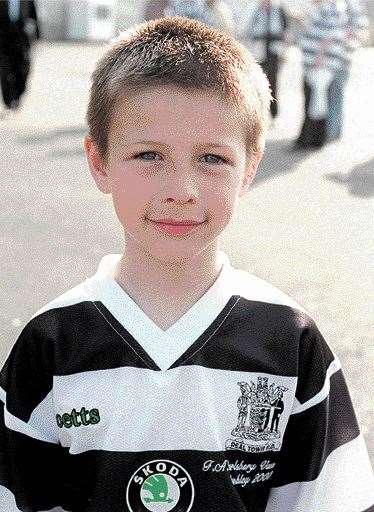 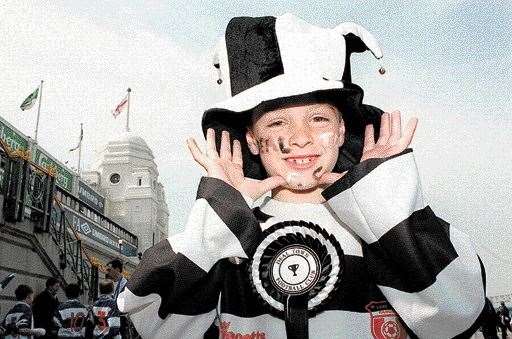 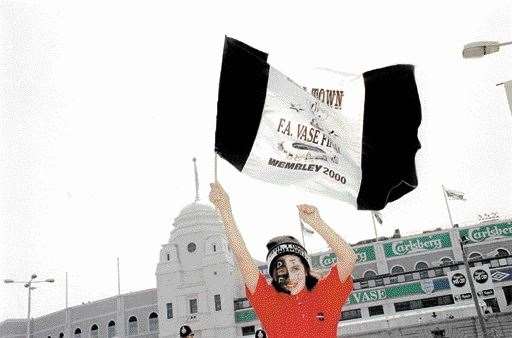 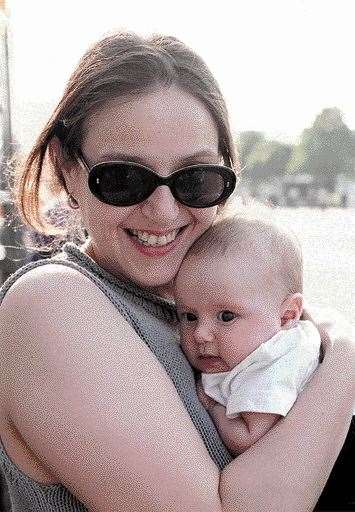 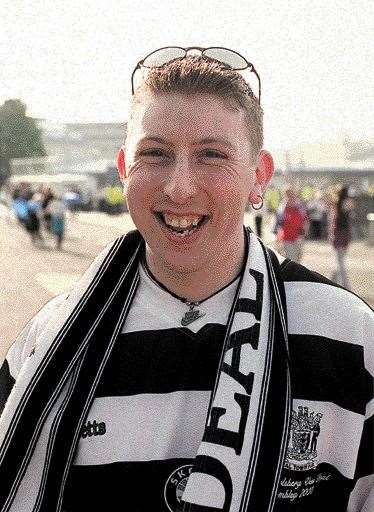 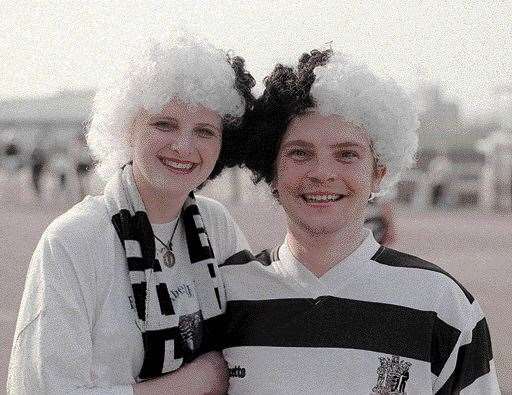 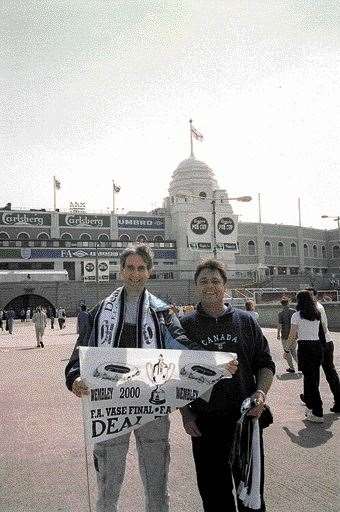 “The buzz around the community in the lead up to the final was fantastic as shops put together window displays showing their support and residents sent in good luck messages to the Mercury. Anticipation built by the day.

“But the support was coming from much further afield than just the town. The Kent non-league family had not seen one its own reach Wembley since Dartford in 1974 and was also right behind the cause.

“The opposition in the final, Chippenham, were a highly ambitious non-league club at the time. The game went by in a blur but Chippenham always seemed to be that little bit quicker and stronger, and more likely to score.

“Then, with only three minutes left, came the defining moment when Roly Graham’s unstoppable volley flew over the Chippenham keeper and nestled in the back of the net. It was enough to ensure Deal would became the first – and still only - Kent team to win the Vase.

“Cue the wild celebrations and, before you knew it, Tommy was on the pitch in tears clutching the trophy and delirious players were hugging each other in delight.

“The party did not end there. A reception at Deal Town Hall took place a few days later, followed by a fantastic open-top bus parade. Houses were draped in black and white as children waved flags and people turned out in their droves to see the bus wind its way through the streets of Deal and once again celebrate a momentous day in the town’s history.

“Sadly, the ongoing wrangling over the redevelopment of The Charles Ground meant the end of the road for that team was only a few months away. It was broken up before the start of the following season and Tommy left the club.

“Fast-forward two decades and it is hard to believe so much time has passed since that sunny afternoon under the Twin Towers. But what was achieved that day gave joy to thousands and individual memories that will last a lifetime.”

“If you read this letter I will be gone”

With Sampson’s time at Deal over, he had spells at Ashford Town, Dartford and Boreham Wood. It was while he was manager of Redhill, that he was hit by a stroke.

“I remember I couldn’t put my trousers on properly,” he said.

“I put both legs into one. I was listing to the left and an ambulance came. I was still having the stroke and was rushed to hospital. A hundred million cells were dead and I would just have to adapt.”

The stroke had left Tommy depressed, so much so that he tried to take his life on three different occasions. One time he had written letters, he was ready to go, but had a change of heart at the last minute.

“You prat!” he said to himself. “Don’t be so stupid. I had eight or nine grandchildren but I had written letters, including to my brother, my sister and my wife, Sandie. I said, ‘if you read this letter I will be gone’, I was determined to do it, but I think back now, what a stupid thing it was to do.

“I went to the doctor, a real nice person, I told him I couldn’t shake off the depression and that I had tried to commit suicide. He told me to get a project, to write a book, but I didn’t think anybody would be interested in reading about me. I was just a nobody from a small part of England called Kent. He suggested writing about my experiences of the stroke, so that’s what I did.”

Sampson’s book ‘Sudden Exit’ tells of his struggle to fight back to health.

“I got to hospital with 20 minutes to spare”

Tommy worked at Faversham Town, he had got through the depression and adjusted to his new way of life, but in 2016 he suffered another major trauma. He had a severe bout of septicemia.

“I got to hospital with 20 minutes to spare,” he said.

“I was in dreadful pain. People in the hospital were in operation mode and the doctor said to Mrs S - who was then still just my partner, Miss Wilson - ‘has he got family?’ She was told to put them on standby because it wasn’t looking good.

“There was a mass in my stomach and if it was cancer they would just have to sew me back up.”

A blood clot had blocked his bowel which had led to serious poisoning.

“My organs were closing down,” he said. “I was in intensive care for 10 days and knew I was close to going. When I woke up, Sandie said, ‘can we get married?’

“She was fed up with telling everyone she was ‘my partner’. We got married, on the seafront at Whitstable. She was finally Mrs Sampson and I love her more than I can believe. She is my carer, she washes me, feeds me, kisses me and encourages me.

“I am proud of where I stand. I could have become a recluse but my competitive spirit is alive. People like Steve Lovell have kept me alive, just coming around for a cup of tea, he’s not the only one and it’s nice that people care. I just love talking, I love talking about football.”

Part 2: "That results has got Wembley written all over it"

Read more on sport in Kent

For confidential support on an emotional issue, call Samaritans on 116 123 at any time.

If you want to talk to someone confidentially, click here.