A Kent man is among eight members of a crime group sentenced today for supplying class A drugs across England and laundering millions of pounds through sham companies.

Sukhjinder Pooney, from Gravesend, was sentenced to 16 years for his part in the racket - with the gang receiving a total of 70 years in prison for supplying, cocaine and other illegal drugs, and transferring at least £1.8m in illicit profits offshore via sham company bank accounts.

Tilbury man Baljinder Kang, who led the organisation while enjoying a lavish lifestyle, was given an 18 year prison term. 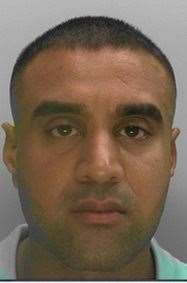 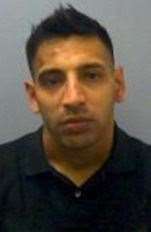 The extensive criminal organisation has been dismantled following an investigation by the joint NCA and Metropolitan Police Organised Crime Partnership (OCP), which uncovered how Kang and Pooney used encrypted smartphones as well as a succession of unregistered ‘burner’ phones to direct the group’s activity.

Members of the crime group trafficked millions of pounds-worth of illegal drugs across England. The proceeds were then deposited in cash into front company bank accounts, before being transferred to a destination account in Dubai.

During the course of the investigation, officers seized more than £1.4million in cash, with at least £1.8 million more known to have been laundered by the criminal network.

The OCP operation resulted in the seizure of over 37kgs of Class A drugs - including heroin and cocaine with a street level value of over £3.5m - a handgun with ammunition, and 50kgs of ketamine.

Numerous additional drug deals, including one representing “53¾” [kg] bought, were noted in ledgers found by officers searching Kang’s home address after he was first arrested in January 2018.

Despite having very little legitimate income, Kang lived a lavish lifestyle. He purchased luxury goods from designer stores including Gucci, Ralph Lauren and Harrods and owned watches worth £12,000 and £36,000. He also leased a Mercedes and an Audi A3, and travelled regularly to the United Arab Emirates.

One of Pooney’s cash couriers, Kieran O’Kane, was also found guilty of money laundering, while Webster Kenton and Abid Rasul were convicted of conspiracy to supply class B drugs - Rasul in his absence having absconded while on bail.

Baljinder Kang pleaded guilty to all charges against him on 23 May 2019. Money launderers Amir Ali and Aminoor Ahmed did the same, on 23 and 24 May respectively.

John Coles, NCA head of Specialist Operations, said: “This investigation has systematically broken up a significant criminal organisation which operated across the south east, west midlands and into the north of England.

“The drugs that Kang and Pooney’s group trafficked will have contributed to violence and exploitation along the supply chain, while their extensive money laundering operation exploited the UK banking system to move money offshore.

“The threat from organised crime continues to grow, and there are many more groups in the UK engaged in similar activity to this group. The NCA and its policing partners are using all the means at our disposal to identify and disrupt them.”

Detective Superintendent Simon Moring from MPS Central Specialist Crime, added: “This was a lengthy and thorough operation involving extensive joint work between a dedicated team of Met and NCA staff – all of who are committed to dismantling organised criminal gangs.

“I hope that today’s result is a stark reminder to those involved in organised criminal activity that the Organised Crime Partnership is far reaching and will use all powers available to us to secure a conviction."