“Has it changed much?” was the much-asked question when I informed locals I was back in Bermuda for the first time in 35 years, having lived and worked there back in the 80s.

Those fulsome words could also perfectly sum up this sub-tropical British Overseas Territory, often mistakenly placed in the Caribbean when it’s actually 600 miles due east of North Carolina.

As for changes, the narrow roads are busier, shops, bars and buildings have tastefully changed and the cost of living is inevitably much higher.

Despite all that, this hook-shaped island isolated in the North Atlantic remains pure paradise. Small wonder that Mark Twain remarked: “You can go to heaven if you want to, I’d rather stay in Bermuda.”

One recent innovation has been the introduction of electric cars for tourists, who had previously only been able to hire mopeds and scooters. My wife and I had one for two days and found it a fun way to explore the whole of the island.

Called a Twizy, we squeezed in, sitting pilot-like one behind the other, and did battle with the scooters, motorbikes and cars darting past, often above the poodling 23mph speed limit.

With a population of around 62,000 and only 22 miles long, there was ample opportunity to check out the many attractions on offer during our two-week stay.

At the western end of the island - discovered in the 1500s by Spanish sea captain Juan de Bermudez and first inhabited by the British in 1609 - is the Royal Naval Dockyard, which was once Britain’s largest naval base outside the UK.

The tastefully restored historical buildings now house upmarket shops and restaurants and there is an opportunity to swim with the lovingly cared for dolphins residents there. A baby dolphin had been born just a few days before our arrival.

At the eastern end, near the airport where a new terminal is being built, is the quaint old town of St George’s with the fine waterfront restaurant Wahoo’s Bistro, offering fine seafood, fish chowder and cocktails including the island’s signature dark ‘n stormy - a tasty concoction of dark rum and ginger beer.

Close by in St David’s is Clearwater Beach and Cooper’s Island nature reserve, which was once home to a NASA tracking station and closed off in my day.

During our visit friends still lucky enough to be basking in hot summers and temperate winters, rallied to make our stay even more enjoyable, arranging a lunch reunion at Tucker’s Point Golf Club and a taking us out in a boat for a picnic in the clear waters matching the cloudless azure sky.

Bermudians have always been known for their kind and friendly nature, and that was another highlight of our vacation. Help and advice was always at hand as we moved around on buses and occasionally lost our way.

One even gave us a lift to our airbnb in the parish of Warwick, where I once lived, when a taxi failed to turn up. He dropped us off in the early evening as the chirping treefrogs started their nightly cacophonous chorus.

If fit and able-bodied it’s worth taking the 185 steps to climb to the top of 245ft Gibbs Hill Lighthouse on the South Shore and breathe in the exhilarating view at the island’s highest point.

Also high on the list should be Reef Explorer glass bottom boat, skippered by Mike Gladwin. In glorious sunshine, we headed for the west end, where we hovered over the submerged shipwreck Vixen as fish darted in all directions, snorkelled in the shallow waters, pausing for a rum swizzle, and then went turtle spotting.

The island is blessed with top class restaurants. One of the best is the Waterlot Inn in Southampton, where I have fond memories of sumptuous Sunday brunches. We dined there for our wedding anniversary and soon discovered why the waterfront eatery has a AAA Four Diamond Award.

We had another fine dining experience at Elbow Beach on the South Shore, first sipping cocktails at the Sea Breeze Lounge, followed by a meal beachside at nearby Mickey’s Bistro.

It was a magical experience as the sun went down and the moon came up. It was then back to Sea Breeze to round off the evening listening to music performed by former club owner and friend Tony Brannon entertaining with an eclectic range of songs with other local singers and musicians.

We also caught them at other venues, including The Reefs Hotel and on the harbour front at the Fairmont Hamilton Princess in

the capital’s harbour, which has undergone a $90 million renovation and features art by the likes of Banksy, Andy Warhol and Damien Hirst. 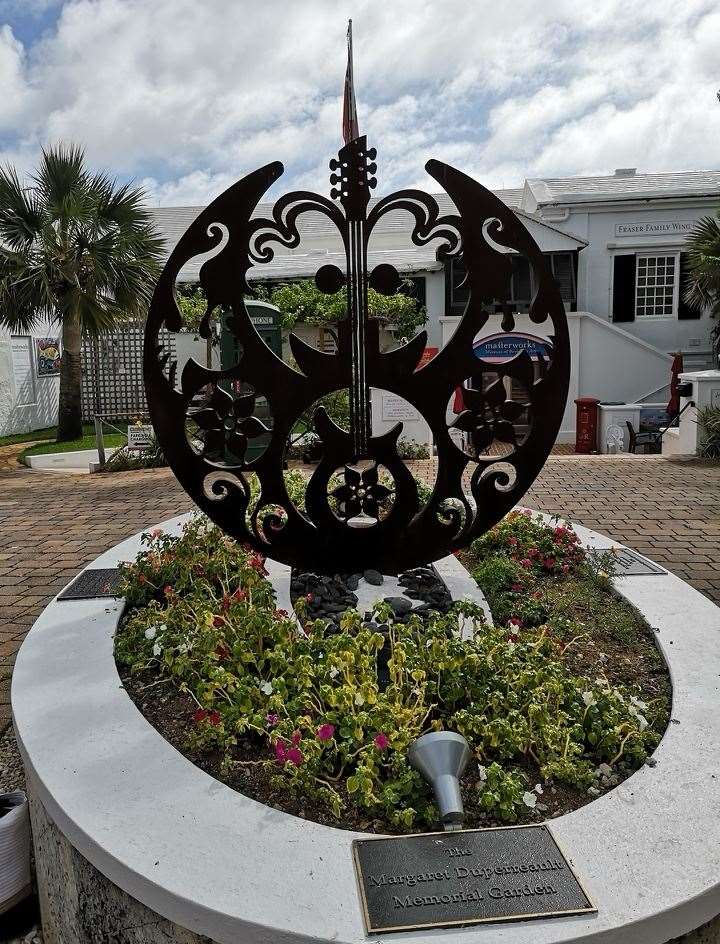 In the expansive Botanical Gardens, where I used to participate in the weekly fun run, is a tribute sculpture to John Lennon, who sailed into the island in June 1980 just a few months before he was murdered in New York.

During his two months on the island he stayed in Fairylands and was free to explore without being hassled or mobbed. After returning to New York he released another superlative album, Double Fantasy – named after a flower he spotted in the Botanical Gardens.

The island received a massive tourism boost in 2017 when the 35th America’s Cup was staged there and televised worldwide. It was already a magnet for Americans with just a couple of hours or so to fly from New York and Boston.

British Airways is the only airline that makes the daily seven-and-a-half flight to Bermuda’s L F Wade International Airport.

To find out more about visiting Bermuda, click here, for more information about Mickey’s Beach Bistro/Café Lido/Sea Breeze, click here and to stay at one of the Fairmont Hotels, click here.