In an age where traditional boozers are closing at a rate of knots it's easy for ale lovers to get downhearted about the state of the brewing industry.

But amongst the doom and gloom it's worth remembering that for every pub calling last orders in Kent a miniature version seems to be springing up in its place.

Scroll down for our interactive map

A surge in the number of micropubs and breweries in recent years means the casual observer could be forgiven for thinking the market is saturated.

But still they keep coming, in various guises, with various themes and making use of all manner of vacant buildings.

Kent now boasts 60 of them — the greatest density of anywhere in the UK.

What could once have been dismissed as a passing wave is now a fully fledged beer tsunami and it shows no sign of slowing down.

You'd be hard pushed to take a drive around any town or village in the county without spotting a peculiarly shaped house, shop or hostel still bearing the tell tale signs of a history spent welcoming punters. 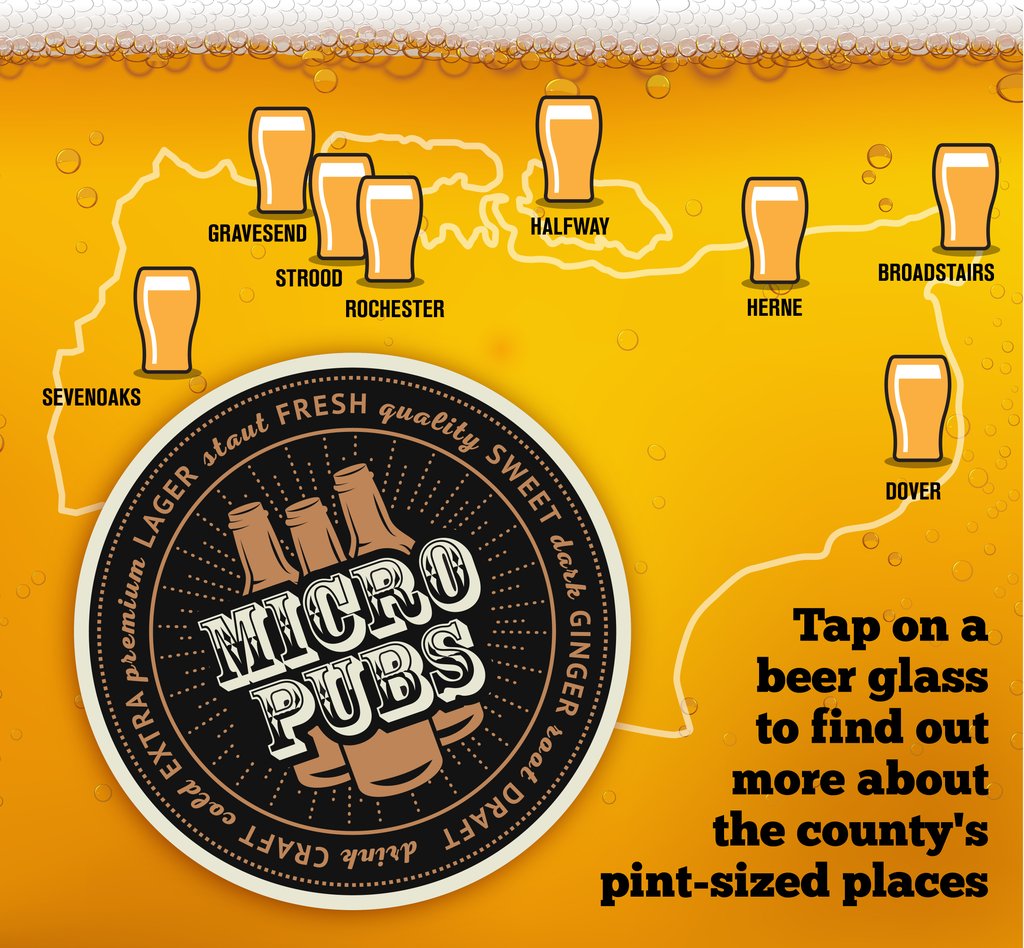 But nowadays it's not just pubs closing alarmingly often but high street shops too.

Rather than reopening as discount stores or bookies, micropubs make far better and more enduring use of the spaces left.

Each has its own past and many have incorporated that in to their current designs.

You're not a fan of the genre if you haven't stepped into this minute marvel. It's the godfather of micropubs, the country's first and in many respects the template for all that has followed. Now in its 14th year, the drinking hole takes its name from its past use and the throwbacks don't end there —the tables which regulars perch around are in fact the original butcher's blocks. Maverick landlord Martyn Hillier's recipe of no lager, no bar, no music and no TV was a risk back in 2005 but has proved more successful than he could have imagined. Casting his mind back he said: “At that time pubs were closing left, right and centre, so I thought I had to do something different... Pubs have got too big over the years. This is how they should be." 'Chatham House Rule Applies' plastered along the front wall set the tone for a pint you won't forget in a hurry.

Read more: We speak to The Butchers Arms landlord on it's story of success

This converted funeral directors perhaps wisely instead takes inspiration from its historic use as a 19th century stable. The award-winning micropub in St Peter’s, Broadstairs, serves cask ales, real ciders and locally produced wines along with handmade pork pies, crisps and cheese. The bar floor is made of original cobbles and is often strewn with hay for effect. After being named pub of the year in 2015 landlord Ian Noble, who opened the pub with business partner Shawn Galvin in April the previous year, said: “It was a light-bulb moment. The building was an empty shell but after six months of hard work we turned it into the pub it is today."

One of the latest additions to the county's beer scene, this alehouse has set up shop in a former tattoo parlour. Sitting empty and unloved in the middle of town for several months the idea to turn the space in to a micropub was first mooted during a changing room chat at Gravesend Rugby Club. Graeme Trigg is one of 10 partners behind the venture. He said: “I think micropubs are still up and coming. We’ve had lots of comments saying it’s fantastic. We’re seeing new people come in and they’re coming back because it’s a decent pub. There’s been such a warmth and enthusiasm for it - people are just so pleased to see another micropub opening up.” The bar opens Tuesday to Friday 5pm to 10pm, Saturdays noon to 10pm and noon to 6pm on Sundays; and follows the traditional micropub aim to provide quality ales and other drinks in a friendly environment, with no TV or loud music.

Historic Rochester's first micropub ran out of beer on its opening night in December 2015 and its popularity has grown ever since. So the news that French owners Cyril Cypres-Paries and Melanie Royer were selling up shocked many regulars. The micropub is in a former pizza takeaway and has breathed life in to a part of the high street which was crying out for attention four years ago. Purists may criticise the way it has embraced gourmet cuisine and live music nights but the size and character of The Frog make it worthy of the coveted micropub title.

It's the second best pub in Kent this year , according to CAMRA, and it's also the only one in a railway arch. While technically not reviving a vacant unit, making the most of a previously unused space has been nothing but positive for Strood. Named after the 1,050th railway arch from London Victoria, under which it sits, and also the time last orders was called when it first opened, this train-themed gem is loved by locomotive enthusiasts and ale aficionados alike. The relaxed attitudes of the three chaps behind the 10:50 cotributes to its unique character and continued popularity.

It's a tragedy to see any greasy spoon close but when it's being replaced by a pub we think we can get over it. Plenty of drinking holes have revived vacant units but this one stand out from the crowd by setting aside space for a side business — a hairdressers. The boho-style boozer is also Britain's first micro cider house and scooped the title of best cider provider in the district in 2017. Run by stylist Katy Tatham and Kieran Redmond the name derives from the number of female punters who'd walk in saying they 'looked like a scarecrow'.

Post offices now exist as something of an afterthought, cuckooing larger businesses with the village stores of yesteryear consigned to the history books. The Heritage proudly boasts the title of Sheppey's first micropub and it's been followed by some greats, including this year's best in Kent winner The Admiral's Arm — itself a former parcel office. It moved in when the Post Office closed in 2013.

The loss of a great pun from the high street is a crying shame, so when gift shop The Great Haul of China shut the public were undoubtedly devastated. But its reincarnation as Sevenoaks first micropub was a welcome reprieve. Sharing a name with the soon-to-reopen once-smallest-pub-in-the-UK-claimant , The Little Gem's moniker is appropriate on two fronts. Firstly, it's gone down very well with locals of the affluent commuter town. Secondly, micropubs in this part of Kent are unusually hard to come by, their popularity on the coast and in the Medway towns yet to trickle in to the west of the county.

Updated September 2020: Sadly, The Little Gem has since shut.

Fear not though, the short life of the Gem appears to be a blip in the county's love affair with micropubs. The Secret Cask in nearby Edenbridge has been open for about two years and the Real Ale Way in Westerham opened about a year ago.

Both have reopened after lockdown and CAMRA's David Moore reports they are doing well.

Perhaps The Gem's arrival is a sign of things to come; that this revolution really isn't over yet?

Maidstone is a town certainly big enough for more than just The Cellars Alehouse, while the brilliant Malling Jug and former florists Larkins' Alehouse in Cranbrook are the only others of note in west Kent.

Before the craze took hold businesses would have likely come and gone from streets all over the county, empty shells sitting pointless and ugly.

Micropubs have been great for the county, they're social hubs with unique characters but most of all they're a beacon of hope on the bleak high street landscape.