Where to get cheap petrol in Kent?

The price of filling up your fuel tank is the highest it has been since 2014, according to the RAC.

And drivers in the south east of England are paying more for fuel per litre than anywhere else in the UK, with Kent motorists among them.

Scroll down for video and interactive graphic

The average cost of diesel stood at 124.2p, up by half a point in the region.

Data from the petrol comparison site, petrolprices.com, reveals the 10 cheapest places to buy petrol and diesel in the county which was accurate on Monday, January 8.

For unleaded, motorists the lowest price was 115.7p at Morrisons in Gravesend.

Second was Tesco, Ramsgate, at 115.9p, along with Sainsbury's in Thanet, Tesco Extra in Broadstairs and Sainsbury's, Pepper Hill, all charging the same.

Morrisons in Canterbury charges 116.6p, Morrisons in Sittingbourne takes 116.7p per litre, along with the branch in Walderslade. 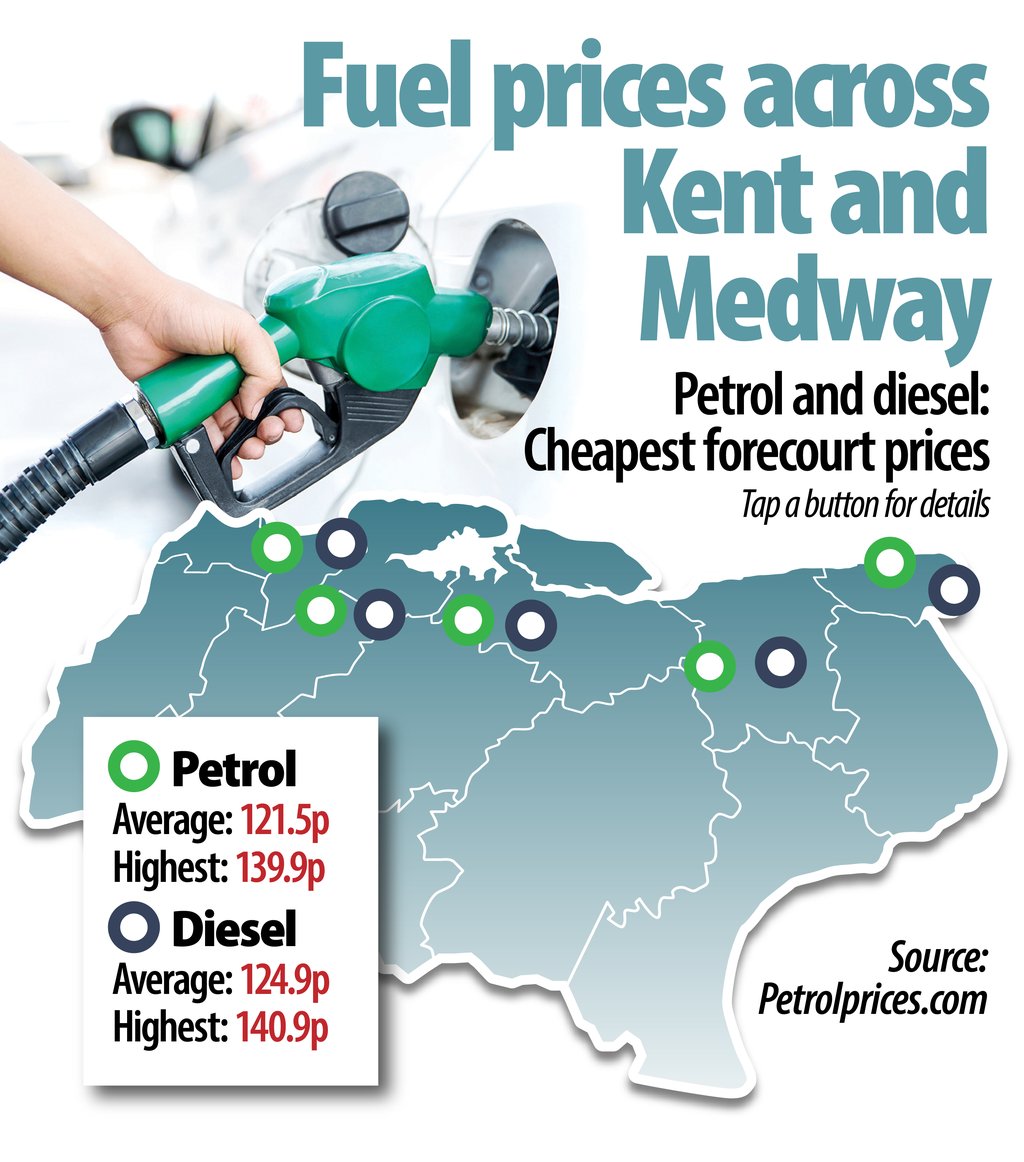 DISCOVER: Where's the cheapest fuel near you?

Asda in Sittingbourne asks for 117.7p with the Asda in Canterbury.

The average price for unleaded in the county is 121.5p and the highest is reportedly 139.9p.

And drivers got the best diesel offer at Morrisons in Sittingbourne which charges 118.7p with the Morrisons in Walderslade, Gravesend and the Asda in Gravesend.

It then jumps to 119.7p for the next cheapest price which can be found at Sittingbourne's Asda and Morrisons in Canterbury.

WATCH: Are petrol prices too high?

"That impacts on inflation and the economy.

"We've been calling for a pricing regulatory body.

"The most important thing here is that the motorists in the UK are the highest taxed in the world.

"Sixty-five per cent of everything that goes in to the tank goes to the government.

"What will help is when supermarkets come in and bring discounting in if you buy so much in their shops."

Meanwhile, the RAC has called the news sad.

Spokesman for the motoring group, Simon Williams, said: "Sadly, December was the month oil reached its highest point for over two and a half years - something which motorists are now feeling the effect of at the pumps.

"On a brighter note, the shutdown of the North Sea Forties pipeline did not cause the price of oil to increase as many expected.

"It had been feared this would lead to petrol and diesel going up in the run-up to Christmas, but luckily for drivers global oil production was not negatively affected as a result.

"It's hard to see pump prices getting much cheaper in the early part of 2018.

"Unfortunately, the good times of lower cost fuel appear to be over and it's probably now far more likely that we will see them going up."

It is also thought the amount we pay at the pump will go up before it goes down.

Motoring editor at Confused.com, Amanda Stretton, said: "We can't blame drivers for resenting the fact they are now paying the highest prices for petrol since December 2014.

"Motorists are fed up of seeing the cost of owning and running a car go up every year.

"The main thing drivers can do to steer away from rising fuel prices is to research the cheapest place to fill up in their local area.

A spokesman for petrolprices.com explained the reason the cheapest places to fill up are supermarkets is because they count on low prices getting people to shop in their stores.

The reason traders which just sell fuel, such as Esso and Jet, are not on the list is because they cannot afford to cut prices as much.

We want to know where the most expensive petrol station in Kent is.

Email us how much you are paying, with a picture of the price, at news@thekmgroup.co.uk and join the debate below.