It was a night that anyone who experienced it will never forget.

The Great Storm of 1987, as it was quickly dubbed, happened overnight on October 15-16, when an exceptionally brutal weather system caused winds to hit much of southern England and northern France.

It was the worst storm to hit England since the Great Storm of 1703 and was responsible for the deaths of at least 22 people in England and France combined (18 in England, several of those in Kent, and at least four in France).

Scroll down for interactive graphic and to watch

Hurricane-force winds battered Kent and the South East in what weather experts described as a once in 200 years storm.

In a live BBC weather forecast broadcast several hours before the hurricane hit weatherman Michael Fish famously said: “Earlier on today, apparently, a lady rang the BBC and said she heard that there was a hurricane on the way.

How wrong he was!

Most of the damage happened between 2am and 6am on the morning of October 16, with winds reaching up to 110mph.

Fifteen million trees were lost across the area affected by the storm.

National Trust properties in Kent at Chartwell (Sir Winston Churchill’s former home), Emmetts Garden and Toys Hill were in the eye of the storm, with thousands of trees uprooted or badly damaged.

The National Trust Trees and Gardens Storm Disaster Appeal raised more than £3 million in the six weeks after the storm, with the money used for replanting and restoration work.

The Great Storm carved a swathe across southern England from the Wash to the River Test.

Many residents cowered in their beds as the storm passed over and rose to scenes of devastation including fallen trees, broken fences, damaged cars and slates stripped from roofs.

Many rail lines had to be closed because of fallen trees and wrecked power lines.

Repairs cost billions of pounds and took months, if not years, to complete.

So what caused it?

Well, a cold front in the Bay of Biscay was given immense power by the collision of warm air from Africa meeting cold air from the Arctic.

Where the two air masses met, a frontal system developed, with the warm air being forced to rise above the cold, creating a drop in air pressure.

Large quantities of water vapour condensed to cloud providing an enormous release of heat energy, driving the winds of the storm and deepening the central pressure.

The deep depression veered north along the north coast of Cornwall and Devon, across the central southern midlands to the Wash, catching the weather forecasters out.

In Sevenoaks, six out of the seven trees at The Vine cricket ground, said to have given the town its name, came down. Later seven new ones were planted.

Not far away at Toys Hill, a 93-acre woodland sitting on the highest point in Kent, lost 98% per cent of its trees in a scene of devastation.

Further east at Knole sweet chestnuts and other traditional trees were lost in the storm.

WATCH: KMTV's Louisa Britton has been learning more about the Great Storm

Meanwhile, at Scotney Castle in Tunbridge Wells - 400-500 year-old sweet chestnuts were lost in the storm, some of which narrowly missed the house.

Tom Hill, National Trust trees and woodland officer in the South East, said: "It’s hard to comprehend the scale of the damage.

"The statistics – though stark - can’t do justice to the heartache of our rangers, gardeners, volunteers and local communities as they woke up to a scene of chaos on 16 October 1987.”

When Emmetts gardener Alan Comb arrived for his first day at work in October 1987 the historic 100-year-old gardens had been reduced to a "battle zone".

Aged just 21, he started working at the property a week after the Great Storm hit.

The Edwardian gardens, which were laid out by banker and passionate plantsman Frederic Lubbock, lost 95 per cent of its surrounding woodland.

“There were trees sticking up like totem poles. For the first few weeks we had two foresters from the Trust in the South West out with a chainsaw clearing the main drive all day long.”

The storms had the effect of opening up views over the Weald of Kent that over the decades had become overgrown.

But some of the follow-up work was not finished.

Gardeners are currently restoring Emmetts' South Garden – thinning out over-planted flower beds and returning the garden to how it would have looked in its Edwardian heyday.

The Great Storm, though devastating, was a natural occurrence – the last of which took place in 1706.

“This is significant” says Tom.

“In the time since, we’ve witnessed the natural response to this kind of phenomenon in the way that nature has healed and restored itself, alongside the extensive conservation carried out by our teams.”

The Storm and its aftermath was a chance for the Trust to re-evaluate the way it works in the outdoors and manages its woodlands.

From the wreckage emerged new thinking and lessons that continue to evolve in the charity’s care and conservation work today.

At Toys Hill, for example, some of the devastated areas were cleared, others were replanted, following clearance, and a non-intervention zone was left alone to regenerate naturally.

In the untouched areas, trees that seeded naturally were allowed to grow and, in many cases, are developing faster than those that were planted.

Light allowed in by the removal of so much of the canopy caused dormant seeds to burst into life, including native clematis, honeysuckle and heather (unseen in the area for more than a century).

Birds and dormice also benefited in the aftermath.

New views opened up by the storm at places like Chartwell and Scotney Castle form the backdrop to countless country walks and picnics.

Fallen trees exposed tree rings hidden for centuries, enabling the trust to date them and reveal more about the history of the special places in its care.

The Great Storm remains one of the most talked about weather events in living memory and the Met Office says it was also a wake-up call that helped identify gaps in severe weather forecasting and highlighted the need for better communication with emergency services and the public.

During the last 30 years there have been many major developments and changes in the way weather forecasts are produced. 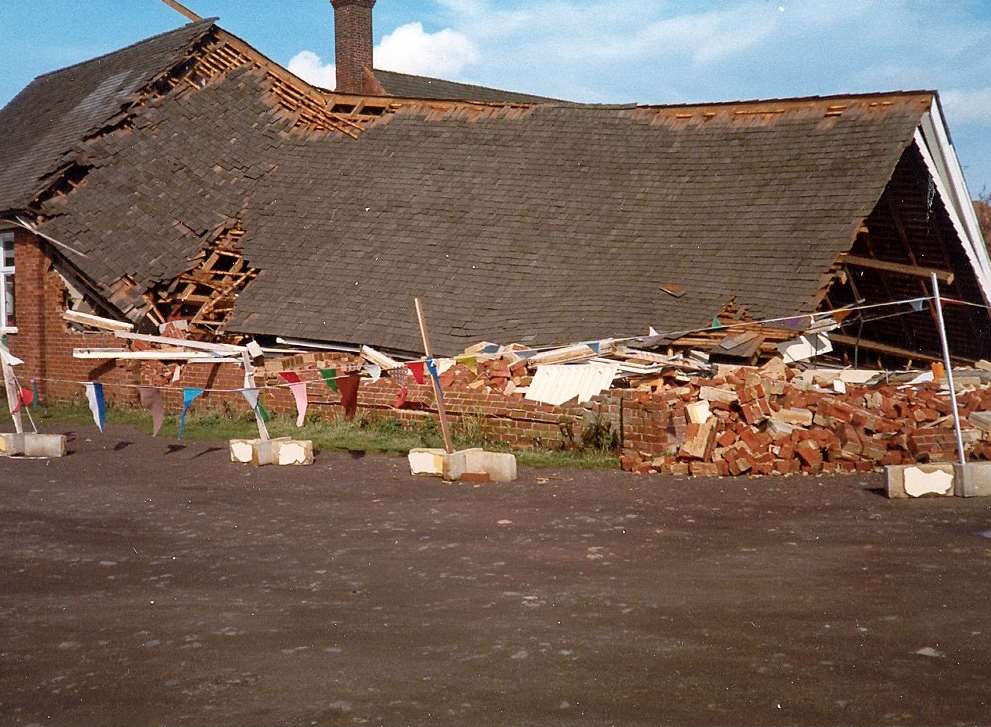 There have also been changes in how they are communicated and therefore in how people respond.

The Met Office pointed out:

"The statistics can’t do justice to the heartache of our rangers, gardeners, volunteers and local communities as they woke up to a scene of chaos on 16 October, 1987" - Tom Hill

Meteorologist and senior presenter, Alex Deakin, said: “In 1987 people received their forecasts either via newspapers or at fixed times on TV and radio.

"Now over 90% of adults consult forecasts via social media, websites or mobile apps.

"A forecast is now available whenever you want and information about up and coming storms can be accessed in seconds.”

"Forecasting the development and behaviour of this type of storm remains challenging, however, the resolution (the spacing between grid points) of our global computer model is now 10km compared to 150km in 1987 and our UK model is 1.5km compared to 75km.

"This is crucial to successfully predicting where and how the weather will impact the UK."