As our attention focuses on the end of the First World War, KM reader Robin Fuller from Boughton Monchelsea, shares with us some of the memoirs of his father Reginald Fuller who served in that conflict. Reginald Fuller was an avid diary writer and kept all the letters he received and copies of those he sent, particularly to his friend William Watts, which has left his son with a rich seam of more than 50,000 words to tap.

On September 11, 1916, Reg Fuller turned 18. Since leaving Maidstone Grammar School two years before, he had learned shorthand and typing and was working as a clerk at the Maidstone Union in King Street. He had already written to the Royal Naval Air Service (RNAS) and resolved to go to Chatham and volunteer in person. He passed the medical and was accepted.

Reg lived with his parents at The Manse in Tonbridge Road. His father, the Rev Walter Fuller was the minister at Westborough Congregational Church. Close by, in Queens Road, lived his pal William Watts. Reg and Will shared an interest in cycling and in chasing the girls at Westborough Church, but their respective war experiences were to be very different. William, a little older, had joined the Kent Cycle Brigade in January 1916. The prospect of just being a messenger did not offer him enough excitement, so by July he had transferred to the Machine Gun Corps and by August was off to France.

On September 6, 1916, Will wrote: “Dear Old Pal, I am back from the firing line for a rest. We are in a barn which is quite a change from sleeping in the open air. The chief thing is, we are away from the sound of the guns and that allows you to get a good night’s rest. I can’t give you all the details of the trenches, but when you are up to your knees in mud and water with shrapnel bursting overhead and a smell which is too horrible for words, that old chap, was how we found the trenches and I sincerely hope you will never have to experience them. The Huns are stickers but our artillery is fine and we have fairly blown them out. As we advance the ground is in a shocking condition. I saw two legs, complete with puttees and boots lying side by side, blown off above the knee. As we moved along a trench, we saw an arm sticking out from under the parapet. Our Corporal said he had a good mind to shake hands with him. That is the spirit you need to get into if you are going to last out here. I remain, Your Sincere Chum, Will.”

Reg replied that he had spent a super holiday in Sheerness, but it wasn’t the same without his pal: “I bet we would have made things hum if you had been there with me!”

On September 18, Will wrote: “Dear Old Chum, I spent the night in a shell hole facing the German lines. We mounted our gun and sat there all night but the Huns were very quiet for once so we never fired a shot. We lose more men to snipers than anything. You hear their bullets go ping beside you. They pick off our gunners so easily. I saw some awful sights, poor wounded fellows groaning and crying out for water, calling out for stretcher-bearers. One badly wounded sergeant was tied to a stretcher by his puttees but broke free, got onto his knees as if praying and then dropped dead. That’s the thing that puts the wind up you, Reg. I don’t mind the shells so much, but that makes me feel queer I can tell you. Nothing I would have liked better than to be in Sheerness with you. I count that as the happiest days of my life when we were in Sheerness last year. I Remain, Yours Until Hell Freezes, Will.” 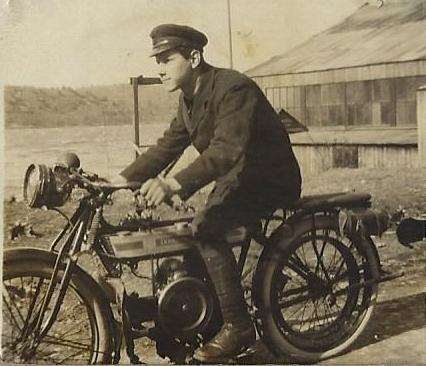 Reg was able to reply with news of all their friends romances around Maidstone and by October 12, he said he was: “Swanking round with a Navy Armlet and 1/10 in my pocket. I wish I could be doing something. Apparently they don’t know what a smart feller me lad I am or they would have called upon me months ago.”

On October 19, William wrote: “It is beginning to get cold out here now which makes night watches rather unpleasant. Fritz has shelled us a bit but no serious damage. Glad to hear you are enjoying yourself with the girls, give my regards to Doff Smith; who is Dolly B going with now? I don’t think Ernie will hang on with Lily Page for long do you? How do you think you would feel under fire with bullets and shells singing over you? It is hard to see your chums going down and men crying out for their mothers. That was what the Somme was like Reg and you find out what you are made of then. We are away from it now but I shall never forget though.”

By the end of November 1916, William Watts was spending up to twelve days at a time in the trenches before being rested. Reg Fuller, in contrast, was starting his RNAS training on Lake Windermere where there was a squadron of seaplanes.

On May 29, 1917, William wrote: “Dear Old Pal, Glad to hear you are well and still the right side of the Channel. Take my tip, old chap, and stay there. What sort of Whitsun did you have? I spent the day filling and carrying sandbags. Weather very hot. We are in bivouacs just behind our line. Ours consists of a shell hole with one side dug away and some sheet iron laid across the top. We crawl in at night with a selection of beetles and long hairy caterpillars. I’d give anything for a few days at home. I’m sweating on a pass about Christmas so you keep in Blighty for a bit, I shall expect to see you somehow. Yours in Hope, Will.”

On August 18, 1917, Reg started to write his War Diary of active service. After a long train journey across France and through Italy, he embarked from Tarranto on a steamer and, on September 11 (his 19th birthday) arrived in Mudros on the island of Lemnos. There was already an established RNAS aerodrome and repair base on the island.

Aircraftsman Fuller F22540 was part of the clerical team but was still called upon to help unload fuel cans, erect buildings and hangars and move aeroplanes about on the ground. On one occasion while stowing machines, he and three others accidentally tipped a Sopwith Camel onto its nose and they ended up on the CO’s report.

Reg’s clerical duties included keeping records of aircraft flights, aircrew, spares, petrol, oil, bombs and machine guns. He also typed the observer’s reports. Many of these details are recorded in his own diary along with more personal details of weather, food, exploring the countryside, going swimming, walking to the YMCA and shopping in Mudros.

Diary entry for September 30, 1917: "Hostile aircraft alarm at 7.45am. Saw three German machines up at a considerable height (12 to 15,000ft). The AA guns commenced firing but it was not much good as the machines were too high. About 8.15am two of our machines went up in pursuit (Capt Allcock in a Sopwith Camel and Lt Mellings in the triplane). At 9.40am received news that two of the three hostile planes (which were large seaplanes) had been shot down, one by each of our pilots. In the evening, Capt Allcock went out to bomb Nagara Seaplane Base hence the seaplanes came. He failed to return and was later reported to be a prisoner of war having been forced to descend in enemy territory with his Handley Page.

(Capt John Allcock was held prisoner by the Turks until November 18, 1918. By January 1919, he was back in Britain and planning to fly the Atlantic, non-stop.)

He later recorded: "On December 9, FSL Harben crashed in Sopwith Strutter no. N5111. Machine broke in two pieces between pilot’s and observer’s seats. Pilot escaped unhurt except a scratch on the bridge of his nose."

Reg Fuller’s diaries record the perils of flying during the 1st World War with many aircraft crashing due to pilot error or mechanical failure. The De Havilland 4 in particular was inclined to burst into flames when it crashed resulting in the crew being burnt to death. In spite of this, Reg had a flight in a Henri Farman in February 1918 and again in August.

Reg did not smoke, or drink. He was able to sell his cigarette ration (50 cigarettes for 6d) or barter them for fresh fruit. Major Berry presented the prizes at a whist drive and “sad to say, he and some of the other officers were the worse for drink. Afterwards he tried to drive the Ford car and ran into the mess deck and the galley, severely damaging the car. It can do nothing but impair their flying capabilities and I strongly suspect that some of the fatal crashes here have been due to the pilots becoming giddy in the air through excessive drinking and smoking.”