The Prime Minister has called a general election in a shock announcement.

Theresa May confirmed the election will take place on Thursday, June 8.

Speaking outside 10 Downing Street this morning, she said she had "recently and reluctantly" made the decision.

She had previously ruled it out, saying it was not necessary until 2020.

Explaining her change of heart, Mrs May said a general election was "the only way to guarantee certainty and security for years ahead" as Britain leaves the European Union.

She said: "As we look to the future, the government has the right plan for negotiating our new relationship with Europe.

"We want a deep and special partnership between a strong and successful European Union and a United Kingdom that is free to chart its own way in the world. 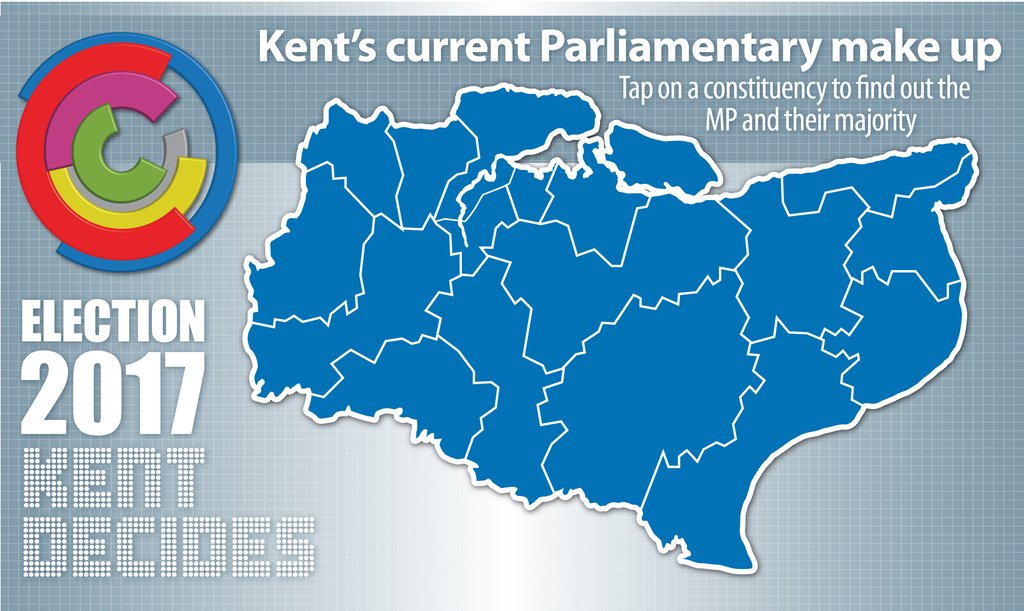 "That means we will regain control of our own money, our own laws and our own borders and we will be free to strike trade deals with old friends and new partners all around the world.

"This is the right approach, and it is in the national interest. But the other political parties oppose it.

"At this moment of enormous national significance there should be unity here in Westminster, but instead there is division."

Justifying the decision, Mrs May said: "The country is coming together, but Westminster is not.

"It is with strong conviction that I believe it is necessary to secure a strong and stable leadership this country needs."

The last general election in 2015 saw the county turn blue as the Conservatives took all 17 seats.

It was a victory for David Cameron, who began a second term as Prime Minister - only to stand down the following year after Britain voted to leave the EU.

Mrs May took over the following month.

As news of the shock announcement broke, Kent's MPs gave their reactions.

Sevenoaks MP and Defence Secretary Michael Fallon said: "This election is an opportunity to secure the strong and stable leadership under Theresa May that the country needs to see us through Brexit and beyond.

"I look forward to campaigning in Sevenoaks for a more secure future where everyone has the chance to get on, get a good school place, and buy their own home."

Gravesham MP Adam Holloway said: "I think she is probably right (to call a general election).

"The political class seem to have a completely different view to the population and on this Brexit negotiation it is extremely important to people living here that we get it right - so here we go again.

"The main issue is that the people of Britain in overwhelming numbers voted to leave the EU and despite the disgraceful Project Fear the sky did not fall in.

"Huge numbers of people in the political class, whether they be Conservative or Lib Dem or whatever, are completely out of touch with the British people.

"These people are ruining our opportunity to make a good deal with our friends in the EU. It makes me really angry when I hear these people trying to ruin our position, making out that it's a little England thing when it's not, it's about being an open-facing, global Britain.

"Sixty-five percent of people here in Gravesham voted to leave and we want to make a big success of it.

"If Theresa May wins she will be able to say to the Remoaners and the world: this is the will of the British people - don't undermine it."

Chatham and Aylesford MP Tracey Crouch said: "I think the PM has done the right thing and it will give the party the mandate to go through with the Brexit negotiations.

"She has changed her mind (about a snap election) - it is as simple as that. It is the right time to do it. The next few years will be challenging in terms of the Brexit."

Dover and Deal MP Charlie Elphicke said: "This is fantastic news. Theresa May is right to go to the country.

"Labour, Lib Dem and SNP MPs will stop at nothing to scupper the Brexit process.

"We must give the Prime Minister the backing she needs to strike the best deal for Britain. This election will enable her to do just that."

He said: "Myself and other colleagues did not see this coming but in the cold light of day it makes sense to unify the country and not get challenged at every step of the way.

"We have been winning Brexit votes in Parliament by 30-40 votes so we had a working majority.

"But Brexit is so important to get right and we do not want the threat of being derailed so in that sense it is wise decision."

He said: "We need to hold this election now to secure the strong and stable leadership the country needs to see us through Brexit and beyond.

"Division in Westminster, and the government’s small majority, risks weakening our Government’s hand in its negotiations with the European Union. Gareth Johnson, MP for Dartford, said: "This announcement came as a surprise to me as much as anyone else. It is right though that people will be able to determine who is going to run our country. "Dartford is Britain’s longest lasting bellwether seat, having returned an MP from the governing party at each election longer than anywhere else."This means that if Labour win in Dartford on June 8 Jeremy Corbyn will be our Prime minister and running our country. The thought of that makes me shudder. "We cannot allow Jeremy Corbyn to spoil the work that Theresa May has started."I will be putting myself forward to continue serving the people of Dartford and help Theresa May continue her work. I hope that I will be given that opportunity."

"We have a one-off opportunity to hold an election while the EU agrees its negotiating position and before the detailed Brexit talks begin.

"This decision cannot be delayed and needs to happen now. That is the only way to end the uncertainty that the other parties are causing."

However, Cllr Vince Maple, the Labour group leader on Medway council, says the move reflects badly on Mrs May.

He said: "Today's news clearly shows the PM is not to be trusted. She made numerous pledges not to have an election."

Helen Grant, MP for Maidstone and the Weald, said: "The call for an early General Election on 8th June 2017 has my full support.

"Until recently, like the Prime Minister, it was my long-held view that another election was not what our country needed.

"Westminster party politics of late has made it plain, however, that such a slim majority will surely compromise the Government’s position as we proceed into vital Brexit negotiations.

"Theresa May requires a strong personal mandate to provide our country with the leadership, certainty and stability it needs for a full five-year term of Parliament, taking us safely beyond our departure from the European Union.

"A June general election can deliver that leadership, certainty and stability."

Folkestone and Hythe MP Damian Collins said: "I was a bit surprised, but think it is the right decision.

"The big challenge for the government is the Brexit negotiations and making sure we get the best deal for Britain.

"With a good mandate, the PM will be able to go into the negotiations with a strong hand. The message we want to send is that we have a good majority and that the Prime Minister can make it quite clear that she has been given the mandate from the British people."

North Thanet MP Sir Roger Gale said: "Theresa May is not an opportunist.

"It's likely she looked long and hard over Easter and crunched some numbers, coming to the conclusion that she has not got a working majority in the Houses of Parliament.

"And if she gets a clear majority and a mandate she will then have the authority to do the job.

"I voted to remain in the referendum but I can see that a victory would send a very clear message to Europe that we intend to make this work.

"But the election won't just be about Brexit, it will also be about the economy.

"At the moment Theresa and Philip Hammond are running the economy very well. In spite of the failing pound we are not doing badly as a country. Do we want to risk all that?"

Sir Roger was selected to stand in North Thanet for the Conservatives in 2020 shortly after the last general election.

He said: "I am determined to see Manston through and see planes flying from the airfield again.

"I think Ukip will have a lot of questions to answer. It was their only election promise and they broke it.

"They will pay the price.

"As far as the election is concerned, bring it on."

Jo James, chief executive of Kent Invicta Chamber of Commerce, said: "Many business communities will understandably be concerned that attention will inevitably shift from the economy and the intricacies of leaving the EU to a potential election campaign.

Looking forward to General Election on June 8th. Will be out campaigning for every vote for a stronger UK and to make a success of Brexit.

"Firms will want to be reassured that the key challenges facing the economy will be front and centre throughout any election period."

Voters are already due to head to the polls on May 4 for the county elections - the results of which will undoubtedly act as a barometer of public feeling ahead of the vote in June.

Sittingbourne and Sheppey MP Gordon Henderson said: "I had no idea until I reached London and took a call from my office to ask if I’d heard the news. I am still in shock.

"I never listen to the radio in the car – I have a USB memory stick with all my LPs on instead.

"I was completely in the dark. Not even my whip knew about it.

"I can only speculate but being at the coal face I could see the Prime Minister was becoming frustrated by the Awkward Squad which was plotting from the back benches and threatening to get in the way of her Brexit negotiations.

"She knows there are difficult discussions ahead and decided it was time for a General Election to hopefully increase her majority in Parliament to stop the Awkward Squad from scuppering her plans. The country needs stability at this time.

"Luckily, we are already in campaigning mood as we are helping our colleagues in the county council elections - but I am going to have to get a new pair of shoes!"