2,000 items of contraband seized from courts

2,000 items of contraband seized from courts

For those with a trained eye, a stroll across fields in Kent can often yield items last touched by human hand thousands of years ago. Take a wonder along out coastline and the churning oceans can wash-up items dating back hundreds of years. Chris Britcher digs up some of the county’s archaeological treasures

In short, the county is something of a treasure trove of historical wonder right beneath our very feet just waiting to be discovered.

Dr Simon Elliott, a noted historian and also serves the Kent Archaeological Society (KAS), explains: “You can find bits of worked flint all over Kent and they date back 400,000 years to the earliest hominid inhabitants [humans’ ancestors] of Britain all the way to late Neolithic [3,000 – 2,500BC] – once you get your eye in it’s quite easy to find them.

“Finding bits of old roof tiles in the soil will often hint at previous Roman settlements, while lots of local churches will reveal much by the fact they use remains of Roman villas in their construction.”

Keith Parfitt, a senior manager at the Canterbury Archaeological Trust, adds: “If you go to the beach at Folkestone, near East Wear Bay, you can collect fossils and Iron Age material and litter from war damaged Folkestone – so with a good pair of eyes you can find all types of things from the distant past to our more modern history.”

Certainly, Kent has revealed some world-class finds over the years from the Bronze Age boat in Dover to some of the oldest human remains ever uncovered near Gravesend. 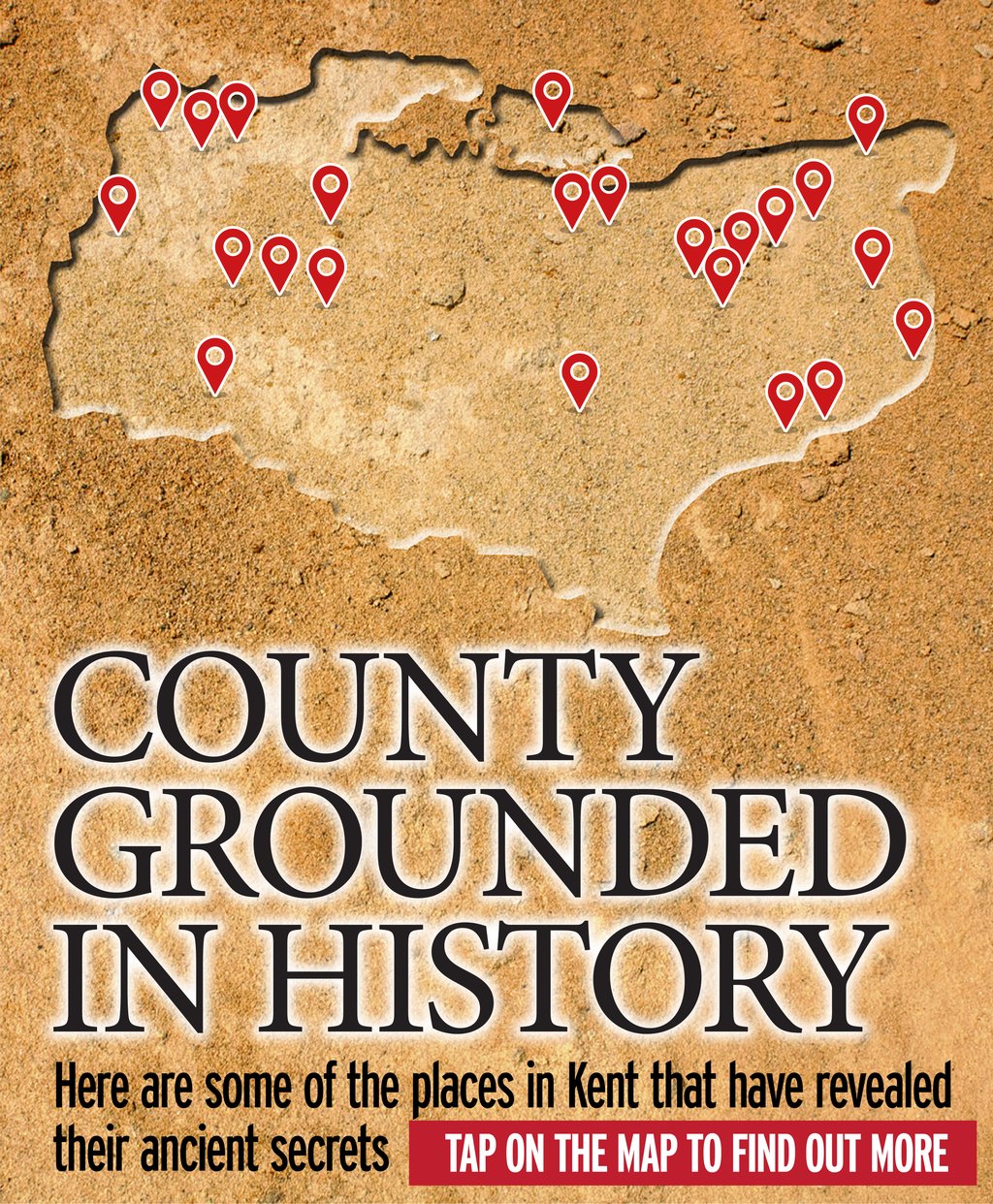 Not to mention remains of dinosaurs, which forever changed our understanding of certain species. What’s more the discoveries keep on coming.

With major developments now obliged to liaise with archaeologists when renovating areas of potential interest, there’s every chance with every new road or housing estate we may unearth more hugely significant finds.

So why is Kent quite so laden with historic discoveries?

Perhaps ironically given Brexit looming on the horizon, it is primarily due to the county’s links to the Continent - and its centuries upon centuries of trading with our European cousins.

Explains Clive Drew, honorary secretary of the KAS: “We have only scratched the surface and more so in Kent because of our links across the Channel.”

Adds Dr Elliott, whose specialisation in Roman history led him to identify the five quarries in the Maidstone area which provided the ragstone which was used to build Roman London: “Kent’s geology plays a major part too.

“In the pre-modern era the majority of settlements were along the line of land either side of the North Downs and down the river valleys of the Stour, Medway and Darent.

"It was the most fertile land so site of the principal settlements.”

Simply by looking carefully, there’s every chance you could stumble upon the next major find.

The Maidstone Iguanodon is one of the most-celebrated finds and today is on permanent display at the National History Museum.

Unearthed during a quarry excavation in Queen’s Road in 1834, the fossilised skeleton remains proved a breakthrough in the understanding of the dinosaur breed.

Such was its significance, in 1946 the local council was granted permission to add it to borough’s coat of arms.

In 2004, while work was taking place on the High Speed 1 railway line, close to Ebbsfleet International station, the remains were found of a straight-tusked elephant and the flint tools to butcher it some 400,000 years ago.

The Southfleet Road elephant, as it has been dubbed, is seen to provide evidence of early human tool manufacture and how it was used to carve up the creature.

In 1935, sticking out of the floor of Barnfield Pit in Swanscombe, near Dartford, a section of a skull was found.

At the time, it was the oldest skull ever found in Britain – believed to have belonged to a young woman dating back to some 380,000 years ago.

It is now on display at the National History Museum in London.

Earlier this year, archaeologists digging at the site of the Margate Caves unearthed an Iron Age skeleton – which dates back some 2,800 years.

The skeleton is believed to be a rare find of what’s known as a crouch burial, where the body is laid as if curled up and sleeping.

The Roman Empire landed in England 43AD in Richborough and Roman settlements can be found across the county.

From remains of the Richborough Fort, to the mosaic-floored splendour of Lullingstone Villa near Dartford, or the wealth of treasures at Canterbury – you can even peer in at the foundations of a Roman bath house on the lower floor of the city’s Waterstones book store - there is plenty to admire.

Following the discovery of an Iron Age forge in Tunbridge Wells three years ago, archaeology teams have recently unearthed evidence of Roman settlements in and around the High Brooms area.

Dover Castle has the Pharos – a Roman lighthouse which still stands today.

While in Gravesham, a major Roman religious centre was discovered at Springhead – believed to be the site of burials as well as a thriving community.

Metal detectorists have been responsible for plenty of very special finds – no more so than the discovery of a prehistoric gold cup in Ringlemere, near Sandwich – one of only two in Britain.

Discovered in 2001, it dates back to 1800BC and had been deliberately buried. It is now on display in the British Museum.

In 1771, on the Barham Downs near Canterbury, the Kingston brooch was unearthed – an exquisite piece of jewellery dating back to the 7th century and found in an Anglo-Saxon grave. It is on display today in a museum in Liverpool.

The Medway Megaliths are a group of early Neolithic monuments and long barrows [stone-built prehistoric monuments, frequently used as burial chambers], dating back to around 4,000 BC.

Situated on both sides of the lower Medway Valley – some in Trottiscliffe, others close to Blue Bell Hill – they have pulled in tourists for centuries and remain a fascinating glimpse of the past.

By taking a little more time when you stroll around our coastline, you may be a little surprised at what you find.

For example, in Folkestone, fossils litter the beach and ooze from the cliffs at Copt Point and around to East Wear Bay, courtesy of the gault clay within the rock layers.

Take a stroll along the coastline at Margate, towards Nayland Rock, and beachcombers have recovered a host of items from the near and distant past – most notably, perhaps, pipes dropped by sailors over the century, some of which have been remarkably well-preserved.

Continue heading around the coast and Sandwich has even seen human bones washed up in recent months – thought to be from the many sailors who lost their lives on the Goodwin Sands just off the town’s coast.

Of a more grisly nature, Deadman’s Island off Sheppey has the remains of hundreds of bodies of those believed to have died on prison ships and subsequently dumped there in the 19th century.

In 1992, as work took place on building the A20 link road between Folkestone and Dover, workers stumbled across the remains of a large and well-preserved prehistoric boat.

Dating back some 3,500 years old, sections were carefully removed and preserved.

Today it is on display at the Dover Museum.

Later this summer a major project will continue in the grounds of Lees Court in Faversham.

A number of Bronze Age hoards were found on the land and it is believed an intact ancient burial chamber is also there.

Major works begin in September where archaeologists will also be hunting for the remains of Badlesmere Castle – a structure believed to have existed in the area hundreds of years ago.

A rare chance to glimpse beneath Rochester Cathedral could forever change the understanding of the original building that once stood there.

Using ground-penetrating radar it would suggest the original Anglo-Saxon cathedral may have been both considerably bigger and in a different position to that originally believed.

In Otford, work continues on excavating a huge Roman villa and trying to establish its relationship within the local area which has already revealed extensive Roman remains.

Meanwhile, a team are continuing a long-term project at East Wear Bay in Folkestone to learn as much as possible of a Roman villa that once stood on a site that, in turn, was built on an Iron Age settlement.

However, the clock is ticking as the site on the cliff edge is eroding and tumbling into the sea.