Vote of confidence in Prime Minister Theresa May to be held

Theresa May won a crucial vote that could have meant the end of her time at Downing Street.

As the high-stakes political drama unfolded, it is possible the support she received from Kent's Conservative MPs have have helped sway the result in her favour.

Of those MPs in Kent and Medway who have declared their hand, all earlier signalled they would be backing the beleaguered leader, who struck a defiant tone in a statement outside Downing Street this morning, saying: "A change of leadership in Conservative party now would put our country's future at risk and create uncertainty when we can least afford it. An election risks handing control to opposition MPs in Parliament."

The veteran Kent MP Sir Roger Gale was first out of the blocks with a message saying he would be backing the PM and labelling her critics as self-indulgent.

But not everyone was backing the PM with local party activists questioning the deal over Brexit as one that failed to deliver what the party had promised.

And Medway council leader Alan Jarrett said he had lost confidence in the leader but did not want her to stand aside yet.

Theresa May wins the vote of confidence in her leadership 200-117, giving her a majority of 83 votes. Follow the latest news and reaction to the vote here

The Prime Minister has sidestepped a question by a Kent MP about whether she would stand as leader at a general election before 2022.

According to reports from the 1922 committee meeting tonight, Mrs May pledged that she would step aside from the leaders role at that election.

However, Gravesham MP Adam Holloway - who was among the 48 rebel MPs - challenged her on what she would do if there was an election before 2022.

Mrs May is said to have sidestepped the question, leaving some to conclude that if there was a snap election she would stand as leader.

The voting has closed and the Prime Minister is expected to learn the results within the next hour.

Important for my constituents to know that, 13 months after having it withdrawn, I have been given back the Conservative Whip. I remain as confident as I always have been of clearing my name and will continue to work as hard for Dover & Deal as I always have done.

1.51pm Helen Whately has voiced her anger at the situation we find ourselves in

12.37pm A change of tone for today's discussions

...has not decided on how she will vote yet.

She said: “I will be supporting the Prime Minister in the confidence vote. She’s committed to negotiating a pragmatic Brexit that carries out the referendum result and does so in a way that works for the economy - for people's jobs and livelihoods.

"She was meant to be in Dublin today working in the national interest, and I’m frustrated that instead she’s having to spend the day in Parliament defending her leadership. What matters is getting a good Brexit and this can’t possible help.”

Medway councillors have called on MPs to sort out divisions within the Conservative party.

Council leader Cllr Alan Jarrett (Con) said: “I do not have confidence in this Prime Minister for a number of reasons, and have not done so for quite some time.

“I agree that we do need a change of Prime Minister, however, I am not sure this is the right time to do so. I wonder whether those that have precipitated this vote have overplayed their hand.”

Deputy leader Cllr Howard Doe said he was “turned off” by the turmoil in Parliament.

“This is a very difficult issue which is dividing both parties and they’ve rather lost their way, all of them.

“If she gets pushed out I can’t see that will solve anything. You’re left with two choices.

“One is you leave without any agreement or you stay in. Personally I would rather be staying in, which was my view all along. We’ve given ourselves a lot of grief over this.”

10.24am Professor of politics and international relations at the University of Kent, Richard Whitman gives his view on tonight's vote

10.19am Your Brexit questions answered

In case you missed it, Brexit minster Steven Barclay answers some of your questions about what it means for the county.

9.50am Damian Green seems to back his old friend

The first of Medway's MPs Kelly Tolhurst has taken to Twitter to also support Theresa May.

She said: "I am fully supporting the Prime Minister @theresa_may tonight. She is doing the most difficult job at a crucial time for our country. To even consider changing our leader at this time is totally wrong & not in the best interest of our country. We need to deliver Brexit."


9.44am Dartford MP backs the Theresa May

Gareth Johnson MP said: “Clearly, this is a historic day for our country. The vote today on the Prime Minister’s future will have a serious impact on all of us. I have stated previously I have reservations about the deal struck by Theresa May as it does not give the UK the autonomy it needs.

"This must change. However, I don’t believe changing the Prime Minister now whilst she is making efforts to improve the deal is the best approach.”

Theresa May is odds-on to keep her leadership after tonight's vote. Betfair has put her at 1/2.

Dominic Raab is favourite to take over if she does lose at 9/2 and Sajid Javid is at 5/1.

Kent's very own Tom Tugendhat is also in the running at 25/1 - the same odds as Andrea Leadsom, David Lidington, Pritti Patel and Ester McVey.

9.24am Helen Grant backs PM too

9.13am How the MPs were going to vote on Brexit deal 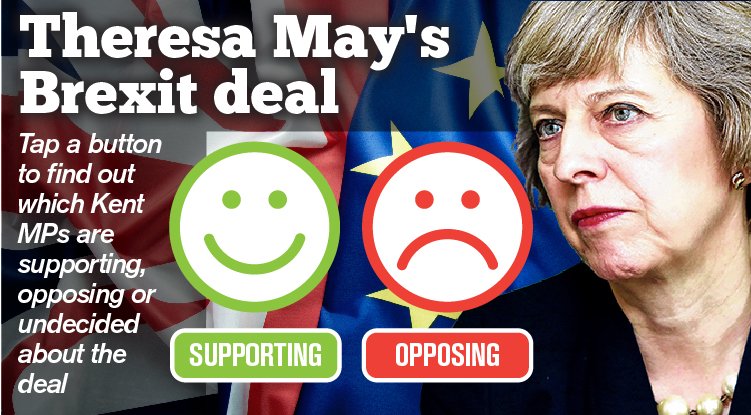 To find out what Brexit means for the county, visit our dedicated news page by clicking here.

Theresa May says she will "contest that vote with everything I've got".

In a statement outside Downing Street she said: "Through good times and bad over the last two years my passionate belief that such a deal is attainable, that a bright future lies ahead, has not waivered, and it is now within our grasp.

"A change of leadership in Conservative party now would put our country's future at risk and create uncertainty when we can least afford it.

"An election risks handing control to opposition MPs in parliament."

Gordon Henderson, MP for Sittingbourne and Sheppey, said he would be backing the PM.

"I shall be supporting the Prime Minister without any reservation," he said.

"We have more important things to worry about in the country than having an election for the leader of the Conservative Party.

"We need, sometimes, to put the country before our own ambitions."

Mr Henderson would not condemn those who have put forward the vote of no confidence, instead saying: "We live in a democracy." Although he added: "I wouldn't have done it."

8.38am Expert analysis from our politics reporter, Paul Francis:

Theresa May's leadership was already hanging by a very narrow thread and it is now perilously close to breaking point By this evening she will know if she has to hand over the keys to Downing Street on what would be a dramatic turn of events. Given her fortitude it seems at this stage she is unlikely to go without a fight. The question is one of arithmetic- can she marshall enough support among MPs to continue. As to possible successors it seems some of the likely suspects are keeping their counsel. One thing the Conservative party is renowned for is being fairly ruthless when it comes to ditching leaders when they become an electoral liability- and there are growing numbers of MPs who may be calculating they have reached that point.

8.35am Letters have been sent

Adam Holloway hasn't reacted yet this morning, however, he did send a letter calling for a vote last month.

The MP for Dover and Deal can't vote on this as he had his whip suspended last year. Read more here.

He said:"I am in Paris but I shall be catching a train home to vote tonight, and I will be voting for the Prime Minister.

"I think it is very self indulgent of them (those who handed in letters of no confidence) and not the right thing for Britain."