A hygiene inspector rated an Indian takeaway as needing 'major improvement' after finding staff were wrapping food in newspaper.

Mouldy cloths and dirty containers were among the problems discovered at Coxheath Tandoori.

The takeaway in Elmfield Court was awarded a one out of five food hygiene rating, with major improvement necessary in its 'management of food safety'.

The food safety officer wrote in a report that cloths had been found throughout the building that were not clean and exposing food to a risk of contamination.

One dirty cloth was placed over the top of naan bread dough balls, with a plastic sheet between them. There was another under a chopping board to prevent it slipping.

Some of the food storage containers were in a 'dirty condition' and a number of metal food tins, being used to store butter, olive oil and cleaning cloths, were beginning to rust.

Raw beef mince and ready-to-eat prawns were being stored together, on the same shelf in a fridge.

The owners were advised ready-to-eat food should always be kept above raw food.

Hand soap had been watered down and there were no hand-drying facilities. A toilet roll was given to staff to dry their hands as they were preparing food. 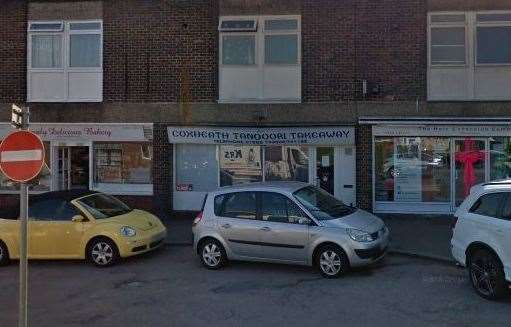 In the fridge, coriander and mooli were found wrapped in newspaper.

The report states: “Newspaper is not a suitable material for wrapping food.”
A white chopping board was scored, stained and had mould growing on it, and could not be ‘effectively cleaned’.

The takeaway was also reported to the fire service after a room next to the kitchen was found to contain a made-up bed, clothing and toiletries, ‘indicating that someone may be using the room for sleeping’.

The report also says staff did not know what temperature to cook food at. It read: “You were clearly unaware of sufficient cooking temperatures as when asked, you responded 25 to 35 degrees Celsius.”

Owner Karim Syed, commenting on the inspection, carried out in July, said: “We’ve already made the changes and we’re just waiting for the revisit.

“We had no problems with our food, there were just issues with the cloths and the cleaning and the inspector just didn’t like the temperature I cook at, but we have cleaned it all and fixed it.”