Johnson’s ‘New Deal’ to prepare for economic aftershock of coronavirus

Boris Johnson has announced a spending spree and a new “opportunity guarantee” to help the economy cope with the “aftershock” of the coronavirus crisis.

The Prime Minister acknowledged that jobs which existed at the start of the pandemic may be lost forever but said the new guarantee would ensure placements or apprenticeships for young people.

Mr Johnson promised his response would not be a return to the austerity that followed the financial crisis, but instead a stimulus package inspired by US president Franklin D Roosevelt, who led America out of the Great Depression with his New Deal in the 1930s.

Mr Johnson returned to the theme of his general election campaign, pledging to “level up” parts of the country that had been left behind while London and the South East prospered.

In a speech in Dudley – a seat the Tories took from Labour – the PM promised to tackle the “unresolved challenges” of the last three decades, highlighting problems in building, social care, transport and the economy.

He acknowledged that jobs which existed in January “are not coming back” after the coronavirus crisis, and the furlough scheme which has seen the state pay people’s wages cannot continue forever.

In response “we will offer an Opportunity Guarantee so that every young person has the chance of apprenticeship or an in-work placement so that they maintain the skills and confidence they need to find the job that is right for them”.

Promising to “build, build, build” his way out of the crisis, Mr Johnson said he would slash “newt-counting” red tape in the planning system to speed up delivery of infrastructure projects and homes.

– £1.5 billion to be allocated this year to hospital maintenance;

– More than £1 billion for a 10-year school rebuilding programme;

The Prime Minister acknowledged “it may seem a bit premature to make a speech now about Britain after Covid” given events in Leicester, where a local lockdown has been imposed.

But “we cannot continue simply to be prisoners of this crisis” and the country “needs to be ready for what may be coming”.

“We’re waiting as if between the flash of lightning and the thunderclap with our hearts in our mouths for the full economic reverberations to appear,” he said.

Chancellor Rishi Sunak will set out a plan to support the economy through the first phase of the recovery next week, Mr Johnson said.

Mr Johnson said there had already been a “vertiginous drop in GDP” but indicated he would borrow to fund the recovery.

“We will not be responding to this crisis with what people called austerity, we are not going to try to cheese-pare our way out of trouble, because the world has moved on since 2008.”

Mr Johnson said the plan, which involves tearing up planning rules, would “build back greener and build a more beautiful Britain”.

To improve connectivity around the country, the Government will carry out a study of all future road, rail, air and cross-sea links between the four nations of the UK. 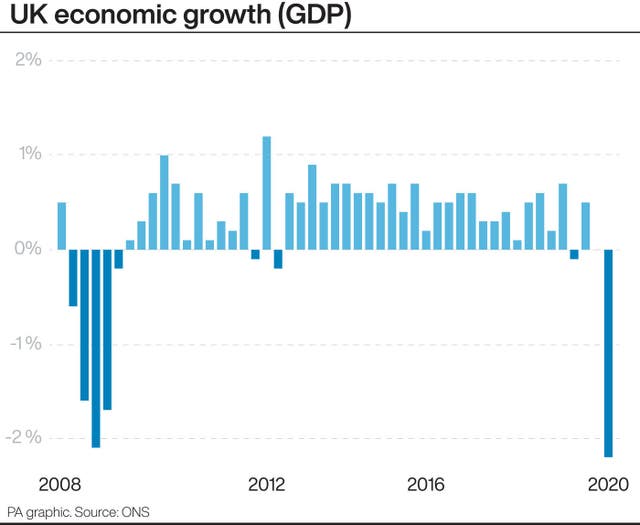 The Prime Minister said that “too many parts of this country have felt left behind, neglected, unloved, as though someone had taken a strategic decision that their fate did not matter as much as the metropolis”.

Mr Johnson’s speech, at a technical college in Dudley, was watched by an audience of just 24 people including a handful of journalists.

In response to criticism about the scale of his intervention, the Prime Minister said it was a “speeded up, intensified and increased” version of manifesto pledges.

Meanwhile, Downing Street denied there had been a cut in the affordable homes programme – which had been described as £12.2 billion over five years at the Budget in March but is now billed as an eight-year plan because of the time taken to actually build the promised homes rather than to allocate the money.

A No 10 spokesman said: “The £12 billion will be spent over the next five years and this will deliver up to 180,000 new affordable homes.

“The majority of homes will be built within the first five years and the rest by 2028-29. This is in line with what was announced at Budget – there has been no cut in funding or delay in delivery.”

The Ministry of Housing, Communities and Local Government said the money included “additional funding to support long-term partnerships with the sector over eight years”.

The Prime Minister promised a New Deal, but there is not much that’s new, and it’s not much of a deal. We are facing an economic crisis – the biggest we have seen in a generation – and the recovery needs to match that

But she added that “the reality is that longer-term plans will falter without continued help for firms still in desperate difficulty”.

Labour leader Sir Keir Starmer said: “The Prime Minister promised a New Deal, but there is not much that’s new, and it’s not much of a deal.

“We are facing an economic crisis – the biggest we have seen in a generation – and the recovery needs to match that.

“What’s been announced amounts to less than £100 per person, and it’s the re-announcement of many manifesto pledges and commitments.”