The immigration minister has promised a “new, comprehensive action plan” to stem the latest surge in migrant Channel crossings after talks with French officials.

Chris Philp and newly appointed clandestine channel threat commander Dan O’Mahoney travelled to Paris on Tuesday to seek stronger enforcement measures as Border Force continued to deal with crossings along the south coast of the UK.

It comes as lawyers representing asylum seekers who arrived in the UK by crossing the Channel on small boats launched legal action to halt their deportation, which is due to take place on Wednesday.

Speaking to reporters after the meeting, Mr Philp said: “We are going to be working at pace in the coming days to make that plan a reality.”

He said the “sheer numbers” crossing the Channel were “completely unacceptable” to both the French and UK governments, so it is quite clear that more needs to be done.

“And that is exactly what this new, comprehensive action plan that we are working on will aim to do.”

Mr Philp would not comment on details of the plan but claimed there were a “number of measures, some of them new, which are under discussion”.

He said it would be “premature” to talk about financial commitments at this stage because the plans were still being finalised.

But he insisted both countries had “renewed and reaffirmed their absolute commitment to make sure this border is properly policed and this route is completely ended.”

Mr O’Mahoney will return to the continent early next week to continue discussions, with France due to appoint its own commander.

The Government has also faced fresh criticism over warnings nine months ago that its own policies meant migrants were resorting to more dangerous routes.

A report by the Foreign Affairs Committee published in November said: “A policy that focuses exclusively on closing borders will drive migrants to take more dangerous routes, and push them into the hands of criminal groups.”

Home Secretary Priti Patel was a member of the committee at the time of its inquiry.

Meanwhile, Prime Minister Boris Johnson was accused of using inflammatory language after calling migrant boat crossings a “very bad and stupid and dangerous and criminal thing to do”.

He also hinted at changing laws to tackle the problem, while Downing Street said Brexit would help as it would end the “inflexible and rigid” requirements on how asylum applications are examined and considered. 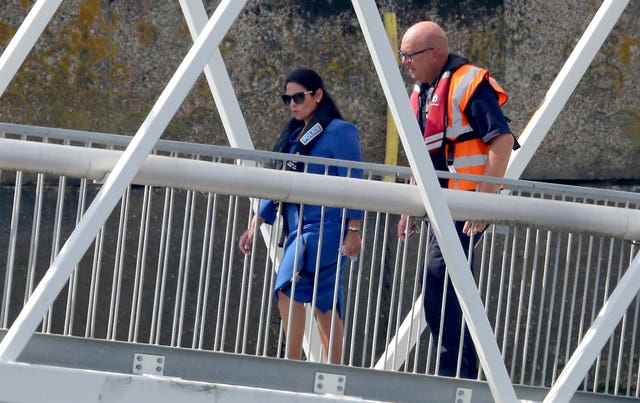 But critics have questioned whether this claim is accurate, arguing that EU laws currently in place do already allow the UK to deport migrants.

More than 4,000 migrants have made it so far this year after completing the dangerous voyage across the world’s busiest shipping lane, with at least 597 arriving between Thursday and Sunday.

The Home Office has formally requested help from the Ministry of Defence (MoD), with a military plane sent out on Monday to survey the Channel and alert the Coastguard and Border Force to emerging crossing attempts.

But Calais MP Pierre-Henri Dumont said bringing in the Navy was a “political measure” intended to show ministers were taking action and warned that it “won’t change anything”.

The latest outcry follows a similar storm last summer when another spike in crossings led Mr Johnson to warn Britain was prepared to start sending back those migrants who did make it across – comments which were branded “misleading and inflammatory” by campaigners.

Since then there have been a series of meetings between UK and French ministers and officials, each time with the promise of more agreements or resources in efforts to address the problem.

Bella Sankey, director of Detention Action, said: “Any ‘comprehensive plan’ must create a safe and legal route for those who would otherwise risk a Channel crossing, otherwise it is neither comprehensive nor an effective plan.

“These negotiations with French counterparts are doomed to further failure unless the UK Government can stop chasing unicorns and show some principled and noble leadership”.