A dramatic increase in homelessness can only be tackled if the government injects more money into the system, a report released today warns.

The report by a local government campaign group, co-chaired by the leader of Sevenoaks District Council, accuses the government of not doing enough to help councils.

Its most stark conclusion is the government has presided over a "national policy failure" and that without more money, the government risks failing to reach its goal of reducing the numbers living rough.

The report by the Local Government Homelessness Commission, headed by council leaders including Peter Fleming, says: “Rough sleeping is just the tip of the iceberg.

"Tackling homelessness and addressing its causes is a long-term project that needs to draw on partners and organisations from across the public sector and cannot be solved by reactive homelessness services alone.”

It says funding is spent "unproductively and inefficiently" and "sustainable and affordable housing, mental health support, addiction services, and other infrastructure are urgently needed to address the causes of homelessness."

The report highlights how levels of homelessness are exacerbated by "a dysfunctional housing market, inadequate and badly administered welfare regime largely exemplified by Universal Credit and the Local Housing Allowance."

The report was set up by the Local Government Homelessness Commission and involved a year-long study into why numbers were on the rise.

It recommended there should be local variations in housing allowance and minimum three-year tenancies for private sector homes with the scrapping of so-called no fault evictions, something which was criticised by controversial Maidstone property tycoon Fergus Wilson earlier this year.

Jonathan Carr-West, Chief Executive of LGiU, said: “Local authorities are tackling an ever growing homelessness crisis in our communities on a shoestring, with less and less money to do so.

"The Government can no longer expect local government to pick up the pieces."

Councils shelled out vast amounts of money to house people in expensive temporary accommodation or to meet skyrocketing private rents, he added.

Cllr Peter Fleming said: “The timing of what has been an in-depth look at the current homelessness situation in this country couldn’t have been more appropriate, with the impact of the Homelessness Reduction Act being felt across local government this was an opportunity to look at different solutions for what has become an intractable problem in many communities.” 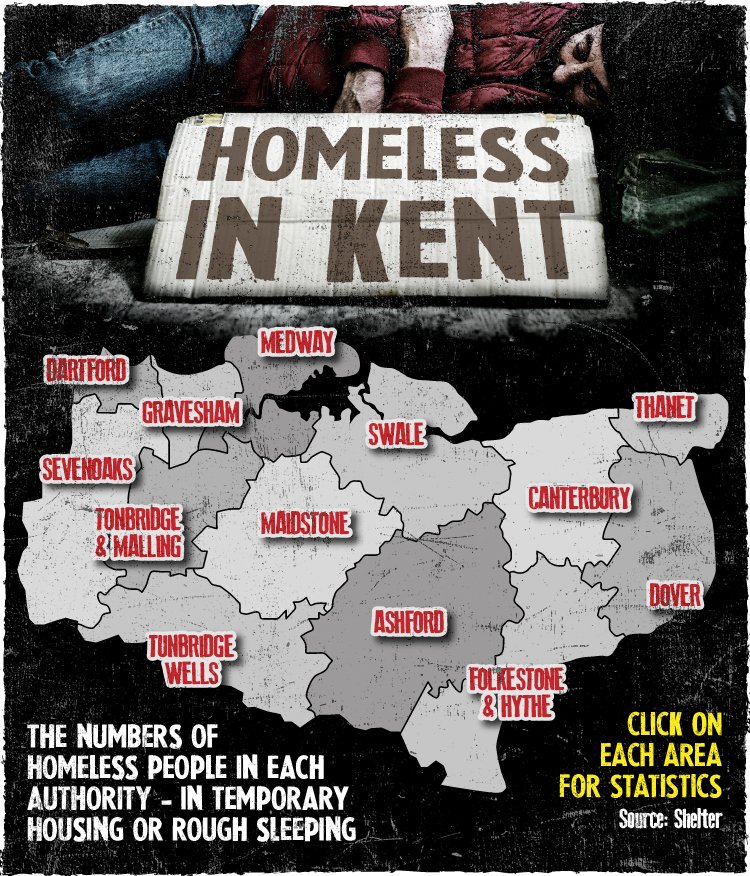 According to figures released last year by the charity Shelter, there were close to an estimated 5,000 people in the county without a roof over their heads.

In the first three months of 2018, a total of 4,723 were either living in temporary accommodation or sleeping rough.

In Dartford one in every 157 people were homeless, which was the highest number in relation to population in the county.

As well as Dartford, Ashford, Medway and Thanet were also among the top 20 areas in the south east with the highest rate of homelessness.

Medway had the most - 1,100. In stark contrast, Canterbury had the least with 36, however, in 2017 the city had the fifth highest rate of homeless deaths in the country.