In pictures: How Kent is celebrating VE Day 75

Despite the coronavirus lockdown, Kent has been pulling out all the stops to celebrate the 75th anniversary of VE Day when the guns of the Second World War fell silent across Europe after six years of ferocious fighting.

Emergency services including the police, fire and ambulance observed the two minutes silence at 11am if they could.

Residents at the Royal British Legion Village in Aylesford, Maidstone, ended up with a surprise delivery of a Spitfire.

The iconic British war plane was created in cake-form by mum Sarah Callow from Dargate near Faversham.

Sarah, 52, who was born and raised on the Isle of Sheppey, said: "I originally contacted Faversham brewers Shepherd Neame and asked if they would like a cake for the VE Day.

"They wanted it donated to RBLI so I dropped it off there this morning. They were over the moon. What an amazing place!"

On Sheppey, 75-year-old pensioner Tim Bell was taking no prisoners.

He went on parade near his home in Scrapsgate Road, Minster, in his own tank named T-75 and wearing a set of Second World War pilot's goggles.

The retired electrician had converted his mobility scooter into a fighting machine complete with its own Union Flag and sound system to blast out tunes from the 1940s to delighted neighbours, who waved flags as he drove past.

He quipped: "Boys never grow up. We just get bigger toys. This seemed an ideal way to mark the 75th anniversary of VE Day in style."

At Christmas he entertained Islanders by driving around with a helicopter on the top raising funds for the Kent Air Ambulance.

Entertainer Martin 'the crooner' Farbrother is entertaining neighbours in Windmill Road, Herne, with songs from Frank Sinatra and other big band performers.

He began his garden party at 2.30pm and led residents in the National Toast at 3pm. After that, an all-clear air raid siren marked the start of Sid The Spiv's wartime sing-along party with standards from the era.

He was planning to end with the Band of the Royal Marines playing Rule Britannia, Land of Hope and Glory and the National Anthem.

Not so far away in Whitstable, Elvis entertainer Neil Duncan was setting up with a parasol and flagpole ready to entertain his neighbours. He said: "This is to thank the so many brave young men and women 75 years ago. It will be 40s classics for the first hour followed by some singing from yours truly and a couple of duets with with my wife Jan."

Schoolboy Alex Glover, 10, dressed as an evacuee in short trousers, waistcoat and cloth hat and staged a Teddy Bears' picnic outside his home in Rectory Road, Sittingbourne.

He had previously decorated the front of his house by colouring all the bricks in with chalk for the NHS but switched the theme to take inVE Day.

Villagers in Aldington near Ashford held a socially distanced two-minute silence at their war memorial at 11am led by 16-year-old Sam Loader.

Sam said a few words and played the trumpet.

The village had been planning a huge celebration but like so many others, had to be cancelled.

Resident Alison Baldwin said: "Villagers have still got into the spirit of the day by decorating houses and holding street parties in their front gardens."

This is Maddison Woodfine aged 5 with her homemade VE Day flag.

Her mum Louise said: "She wanted to wave for the Spitfire flyover today in memory of her great, great grandfather Harold Rowbotham who fought and sadly lost his life in May 1944.

"His daughter, our great grandma, never got to meet him.

"He used to fly the Spitfires to help cover the British soldiers."

Residents of Greenside, in Maidstone, moved tables and chairs into their driveways to stage their own socially distant street party. 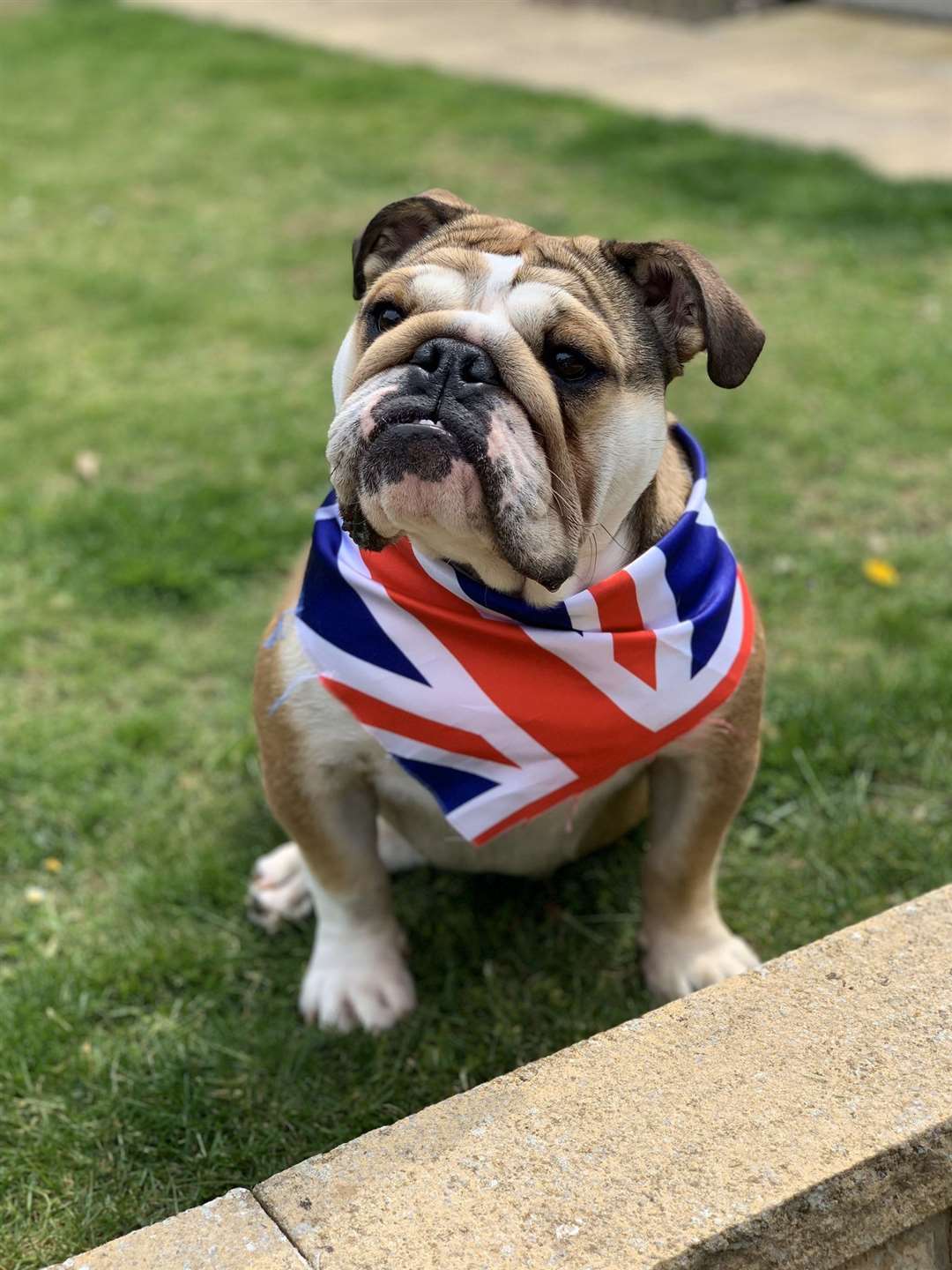 Elsewhere in the village of Eastry near Sandwich, artist Sam Garrett completed this mural to celebrate VE Day.

According to his friend, Maggiie Tomlinson, street artist Sam has the backing of all the villagers who seem to love the artwork. In Edmandson Avenue, in Wesbrook in Thanet, neighbours enjoyed their VE Day celebrations in their front gardens adhering to social distancing and enjoying a glass of bubbly, sandwiches and scones. And in Hawthorne Avenue, Twydall, neighbours held a street party from their front gardens.

Kerry James, said: "There is a brilliant community spirit here and the majority of houses are decorated and everyone out in their gardens it’s great." Elsewhere in Holmside Road in Gillingham neighbours stood outside on their green adhering to social distancing rules to sing the Vera Lynn classic, We'll Meet Again.

This video was shot by Avalon Monk, who said the children who live in the street wanted to join in the sing-along.

And slimmers in Maidstone were able to enjoy a VE-Day treat made by Sue Bartlett.

Susan made blueberry and yogurt scones, which proved very popular.

She added: "As our group services have moved temporarily to a virtual group meeting on Zoom, we're sharing so many more recipes."

And it wasn't only people in Kent who celebrated the occasion.

Ludo is a seven-month-old puppy who belongs to Alexia French, 12, who is from Sevenoaks.

He loved getting hold of the flag. And Zoe Styles, 46, and her son, Jayde Oldham , 23, who live in Highbrooms Tunbridge Wells, are in lockdown together and have really enjoyed creating the bunting and posters out of cardboard boxes.

And an inspired schoolgirl ensured her street marked the 75th anniversary of VE Day in its own unique way - with colourful scarecrows outside every house, click her to see them.