A shortage of GPs in Thanet is leading to an “impossible and dangerous situation”, a doctor has warned.

New NHS figures reveal the Isle to be the fourth worst area in the country for the number of GPs per patient, with just one doctor for every 2,500 people.

The alarming statistics put the Isle among the bottom 2% in England.

Dr Coral Jones, a member of the Save Our NHS in Kent (SONIK) campaign group, has now called on the NHS to rethink its strategy in light of the numbers.

There is just one GP for every 2,522 patients in Thanet which is almost double that of the best area in the country - Rushcliffe in Nottinghamshire.

In 2015, there was a total of 98 GPs working in the district but the latest figures compiled last September showed there was now just 69 - a fall of nearly a third.

Only Bradford, Horsham and Mid Sussex and Kent neighbours Swale had a higher proportion of GPs per patients.

The numbers showed Swale is the worst in the country with 3,342 patients for every doctor. This is three times worse than Rushcliffe which has just 1,192 patients per GP.

But the number of nurses working in Thanet is at a three-year high increasing from 56 in 2015 to 62 last year.

Dr Jones said: "This is a dangerous situation and requires immediate action by NHS bosses including urgent investment in primary care.

"Where there are large numbers of patients per doctor, GPs will become stressed and burnt out, practice staff demoralised and it is dangerous if patients are unable to reach care when needed.

"Health workers want to do their best for patients, not limit access. As a doctor, it’s an impossible situation."

Dr Jones said the number of surgeries in Thanet had already been slashed by a third in the last three years leaving just 14 open as the NHS plans more cuts by introducing "three centralised health care superhubs".

She said losing services in areas like Thanet and Swale "is not the answer" especially when it they are areas with high medical demands, poor transport links and high levels of deprivation.

Dr Jones added: “Thanet and Swale include some of the most deprived parts of the country. Deprivation and social inequality, especially among older residents, cause poor health. Thanet and Swale need more health and social care located in the neighbourhood, not less.

"We need to fund modern premises, training for all staff in a practice and the resources to build up community health teams for integrated local care.

"This is the only way we will attract and keep GPs, while at the same time ensuring good treatment for patients."

East Cliff Practice in Ramsgate and Birchington Medical Centre are both currently advertising for new GPs. 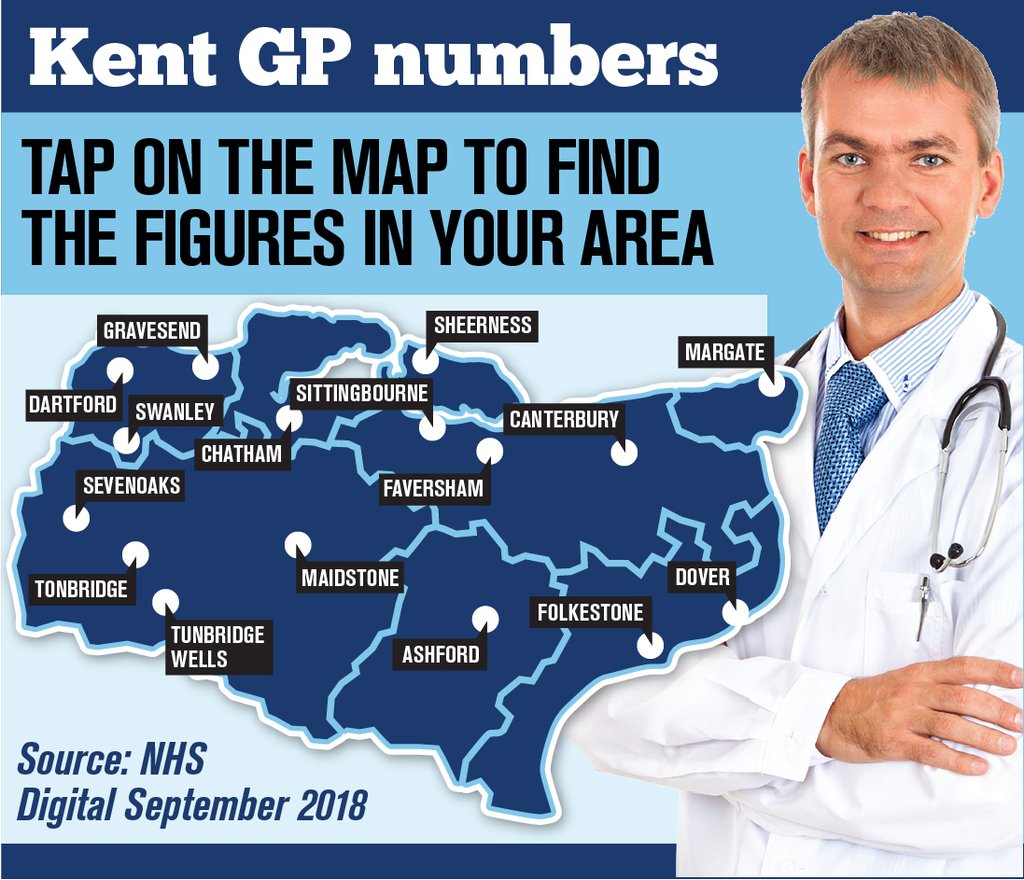 Caroline Selkirk, managing director of east Kent CCGs, said: "We know that the recruitment of GPs remains a significant challenge for local GP practices that are responsible for recruiting their own staff.

"However, not all care needs to be provided by a GP and a GP practice will recruit a broad range of clinicians to meet their patients’ needs.

"NHS Thanet CCG continues to work with all our practices to help make sure patients have access to the right type of clinician when they need it.

"We have helped groups of GP practices set up Extended Primary Care Networks to offer a number of additional services across Thanet. For instance, the Acute Response Team provides an immediate response for patients who can be cared for at home with an appropriate care package to relieve pressure on local GPs.

"The Thanet area has also recently recruited two GPs through the International GP recruitment project. A third wave of recruitment is set to start in March.

"The opening of the Kent Medical School scheduled for 2020 will also support our efforts to recruit locally in the longer term."

The crisis across Kent has been highlighted in an analysis by KentOnline showing five out of the county's eight NHS areas being ranked in the lowest 9% in the whole country.

All of Kent's clinical commissioning groups (CCGs) were in the lowest third nationally with Canterbury and Coastal CCG - covering Canterbury, Whitstable and Herne Bay - the best area in Kent with 1,942 patients per doctor and ranking in the lowest 29%.

South Kent Coast CCG (which covers Folkestone, Dover, Deal and Romney Marsh) was in the bottom 20% with 2,047 patients per doctor while West Kent CCG (Tonbridge, Maidstone and Sevenoaks and Tunbridge Wells) has one GP for every 2,123 patients.

Overall in Kent, there are 101 fewer GPs in the county compared to 2015. The latest figures show Kent has 1,093 doctors.

Surgeries in the county are trying to recruit new GPs with 20 vacancies listed on the Kent Local Medical Committee website.

But this falls well short of the 181 doctors needed to reach the national average, documents have revealed.

Kent lost 39 GPs in a year between September 2017 and the same month last year, papers due to be discussed by county councillors showed.

Practice managers across the county are struggling to fill vacant GP posts with more than half (53%) unfilled after "at least a year", 12% of all GP posts vacant and locum doctors making up 8% of the workforce.

All nurse vacancies in Kent and Medway have been vacant for more than six months with the number of nurses countywide dropping by 29 from 744 in 2015 to 715 in 2018.

NHS leaders will present a report to county councillors at County Hall in Maidstone on Friday outlining a 12-point plan costing £1.5 million.

The plan's aims include an "international GP and primary care recruitment campaign", introducing and developing new roles through the Kent and Medway Medical School, leadership schemes and flexible working schemes to reduce the number of locum posts into full-time positions.