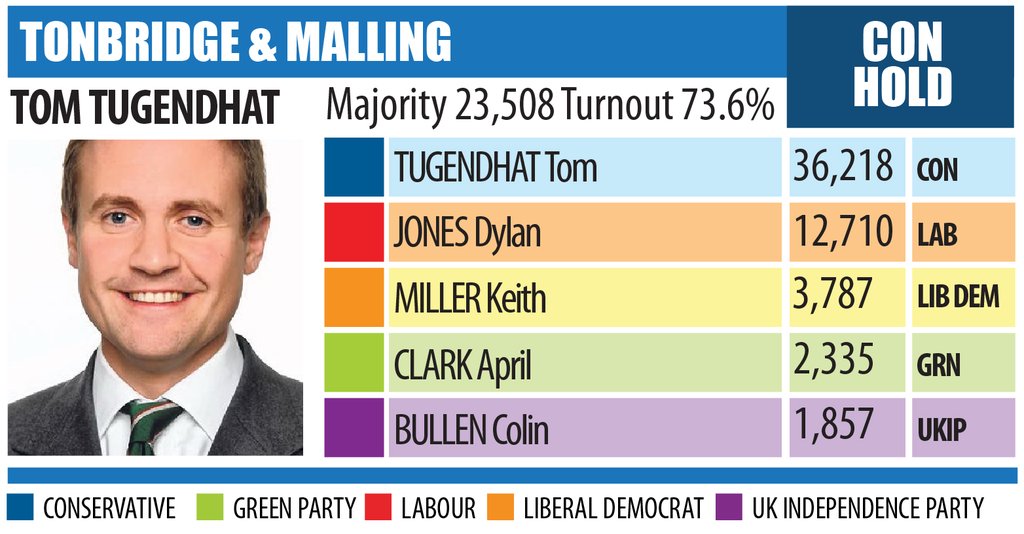 After a day of polling, the ballot boxes for Tonbridge and Malling have been emptied and counted, and have delivered a decisive result.

Of those ballots, there were 36,218 votes cast for Conservative candidate Tom Tugendhat, which gave him a majority of more than 23,500 votes.

This is a slightly smaller majority than the Conservative MP enjoyed in 2015 when he first won the seat, but he did collect more votes this time.

Speaking after the result announcement, the 43-year-old father of two said: "My majority, I'm delighted to say, is an endorsement on the work we've been doing in this area over the last two years.

"The Conservative team here is very much the county council, borough council in Tonbridge and Malling, and the district council in Sevenoaks, and what we've achieved for the people who live here, and that's the way we should be judged; on how we deliver."

The first box returned at 10.14pm, and verification of the ballots started just before 10.30pm, with the box from Tonbridge Castle the first to be emptied.

By 10.58pm the boxes from all 55 polling stations around the constituency had arrived at the Angel Centre.

Seventeen tables of counters verified the totals before they began totting up the votes for each of the five candidates.

Ballots were divided into baskets for each candidate before being counted.

Another notable result was the Labour vote, which had significantly increased from 2015, from 7,600 to 12,700. The Ukip vote languished however, decreasing by more than 6,000 votes.

The result was announced at 2.50am, much earlier than had originally been expected.

There were 108 spoiled ballots, which included 21 ballots where voters had ticked boxes for more than one candidate.