A look back at nightclubs in Ashford throughout the 80s, 90s and 00s

Ashford may not be a top clubbing destination, but in the past it was never short of social venues and nightspots.

The town has seen many vibrant venues come and go over the past decades - including Dusty's, Liquid and Envy and the M20 nightclub.

Today residents are forced to travel out of town to sample a selection of bars and clubs and escape their daily reality, as there is only one nightclub remaining.

But the night scene in Ashford hasn't always been so bleak.

Dusty's and The Jolly Miller

The 118-year-old flour mill in East Hill has long been used as a backdrop for nights out.

It closed as a working mill in 1972 and remained unused until it hit the headlines in 1974 when a catastrophic fire devastated part of the building.

It was transformed into Ashford's first nightclub in the early 80s, and the club owner invited residents to come up with a name.

Dusty's and The Jolly Miller operated across two floors - with a nightclub on the top floor and a restaurant situated below.

Fabiola Tonna, 57, from Kennington, remembers queues of people lining up East Hill to get into the venue.

"It was so good when it opened as we didn't have nightclub at the time", said the mum-of-one.

"At first you had to be over 21, so we had to wait a year or so to be allowed in, but we managed to sneak in once or twice.

"We’d know virtually everyone in there.

"Now we get the chance to reminisce at John 'Webbo' Webster’s Dusty's reunion nights with old faces catching up and enjoying a boogie to the old sounds!"

Pam Powling added: "Dusty's was the best night out.

"I used to have a handful of drinks vouchers and the night was free.

"I would love the flour mill to be brought back as a nightclub - that would be awesome."

The club closed in 1990, when the owner of the mill reportedly abandoned the business owing thousands of pounds.

Kingfisher Leisure took on the premises following Dusty's departure and transformed the building into a popular nightclub and pub.

Bosses spent £1.5m on the refurbishment of Cales and Flatfoot Sam's, which also included an on-site microbrewery.

Scores of people lined the streets for the opening of Cales nightclub in 1990 - which was based on the upper floor.

Some remember the nightclub for having "sticky floors", with one ex-clubber saying: "I never noticed the sticky floors until I was in there sober and it shed a whole new light on it - yuck!"

A month after the nightclub launched, Flatfoot Sam's pub opened on the floor below.

Famous singers Rick Astley and La Toya Jackson are said to have performed at the club.

It served the town for more than a decade and closed in 2001.

Tracy Sweetman, 39, has many fond memories of the club which she used to party at 20 years ago.

"It was a fantastic night out, I used to go a lot on Mondays and weekends.

"They used to play house and cheesy songs.

"I have some good memories here - Ashford is not the same now the clubs have gone."

Promoters injected £3m into the site and promised clubbers an "escape from reality" when they launched the nightclub in 2002.

The Life bar - aimed at those seeking a more relaxed atmosphere - was positioned below the nightclub and played music from across the decades.

"It was great, we all used to stay downstairs as they played older music", Fabiola Tonna added.

"Again, we virtually all knew each other there as well.

"Upstairs was more up-to-date, we’d go up now and again but preferred it back downstairs. 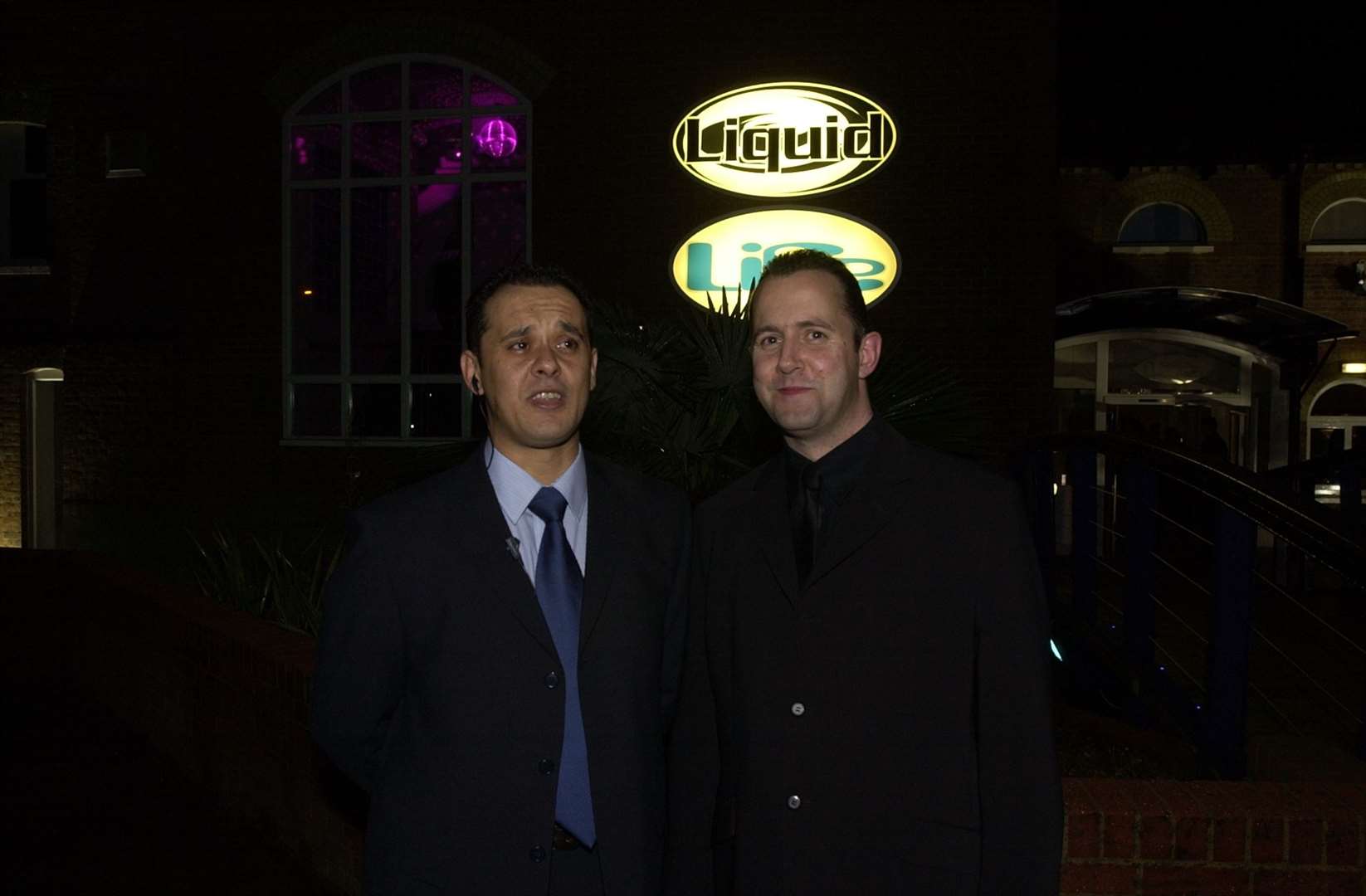 "There was always a big queue going up East Hill to get in, we queued in wind, rain and snow.

"It was always handy if one of your friends knew a doorman that could get you straight in."

New flooring, modern decor and an upgraded sound and lighting system was installed inside, along with an exclusive VIP lounge and two outdoor heated smoking terraces.

Famous faces including radio DJ Tim Westwood, Joey Essex, Alex Arnold and the cast of the fifth series of Skins and stars of MTV's Dirty Sanchez made an appearance at the club over the years.

Vicky and Daniel Davies, who are now in their 30s and live in Kingsnorth, met in Liquid more than 13 years ago.

Mrs Davies said: "We met at liquid over 13 years ago and we married five years later.

"Today we have three lovely children, and liquid is history - literally."

In 2011, Ashford School bought the freehold to the building but Liquid continued to operate from the site.

Luminar Leisure - which ran 76 clubs across the country - went into administration later that year but decided to keep the Ashford nightclub open.

Club bosses shut Liquid in 2014 - marking the end of an era as the flour mill had played a huge part in the social life of scores of people since 1981.

Hundreds of guests attended a special Dusk to Dawn party to celebrate the clubs final night - with staff describing it as one of the busiest nights ever.

Luminar bosses decided to transfer the club to The Old Warehouse in Station Approach, and rebranded it as Cameo.

Planning documents have revealed that the private school is looking to sell the historic flour mill, which has been empty since Liquid and Envy vacated six years ago.

She would like to see the derelict building transformed into an over 30s venue.

"I remember following the photographer around Liquid hoping for a decent picture on the website and buying a tiny laminated copy before going home", she said.

"I'd love to see an over 30s club open. Most of the people in the nightclubs now are old enough to be my kids."

The Old Warehouse, which is now home to Cameo, was first converted into a nightclub, restaurant and bar in 1998.

The club in Station Approach has changed hands several times over the years - operating as NV, Kudos, Elusive, Remix and Glisten.

But when Hustle opened a decade ago, bosses were determined to bring the club back to its former glory.

Fire eaters, stilt walkers, tequila girls, dancers and models marked the launch of the nightclub in the summer of 2010.

The club brought a number of big-name stars to the town, including Danny Dyer, Professor Green and Tinchy Stryder. The Old Warehouse has had various uses over the years

The rewind bar featured retro games machines and a custom-made DJ booth in the shape of a giant Rubik's Cube.

But the club closed after three years trading in the town.

Bosses at the Luminar Group closed Liquid and Envy in 2014 and moved to the listed warehouse building in Station Approach.

Clubbers were left with out a late-night venue for more than two months as bosses worked on the transition.

It threw open its doors in December 2014 following a £1.25m refurbishment, which included 16 private pre-bookable booths, three dance floors and a roof terrace.

Cameo, which is now owned by the Deltic Group, is the only nightclub left in the town.

What is now a place to enjoy a plate of peri peri chicken or tuck into a burrito, was once an exciting raving destination.

The M20 nightclub opened in the early 00s in Eureka Park, in what has since become Nando's and Chiquito.

The venue - which became Britain's first superclub in 2004 - hosted performances from the likes of DJ EZ and Ms. Dynamite.

Today the pair, from South Ashford, have three children together and have been married for nine years.

Reminiscing on her clubbing days, Mrs Bowden said: "I liked the M20 nightclub the most, I've got very happy memories there.

"My sister and her ex-boyfriend set me up with his best mate who was living in Grimsby at the time.

"Our first date was at the M20 club and we are still together now -16 years later.

"Gone are the days that you could actually dance to music I haven’t touched a night club since."

It seems as though the club served as a great meeting point for young lovers, as ex-nightclub employee Naomi Davies also met her husband there.

The 37-year-old, who used to live in Stanhope but has since moved to Northumberland, said: "I really did love working there, it was probably one of the best places I have worked.

"I was unsure to start with as I'm deaf but the managers let me work in the cloakroom where there wasn't too much noise.

"I made so many friends there. Saturday nights after closing were the best, we'd all help clean up then we were allowed a couple drinks in the bar area of the club.

"My husband worked in the security hut outside, we just started chatting one day and it went from there.

"We got married five years later and we now have two children together."

The nightclub shut in 2005 and the unit remained empty for three years after its closure.

Strawberry Moons - which had clubs in Maidstone and London at the time - arrived in 2008.

But despite big investment in the large unit, the nightclub closed less than six months after it opened.

Weeks after Strawberry Moons vacated the premises, bosses at Rain nightclub moved in and promised to deliver much more.

The club was run by Tom Jeylani, who was a former employee at Strawberry Moons.

He had ambitious plans for the site and proposed to put on special events, including Ministry of Sounds nights, and to bring in big-name DJs.

But fans were left furious when R&B star Ne-Yo - who was set to perform at the venue in 2009 - failed to show up.

The venue changed hands for a fourth time in late 2009, with owners Arena Live taking on the superclub.

Described at the time as a rival to the Leas Cliff Hall in Folkestone, the company spent about £1m revamping the lighting and sound system.

An application to keep the club open until 6am was approved by Ashford Borough Council (ABC), despite objections from neighbouring residents.

Wrestling, stage plays and boxing events were put on at the 2,000-capacity venue.

In 2011, Nando's and Chiquito applied to open restaurants in each half of the unit and still occupy the premises today.

What are your memories of Ashford's nightclubs? Leave your comments below.