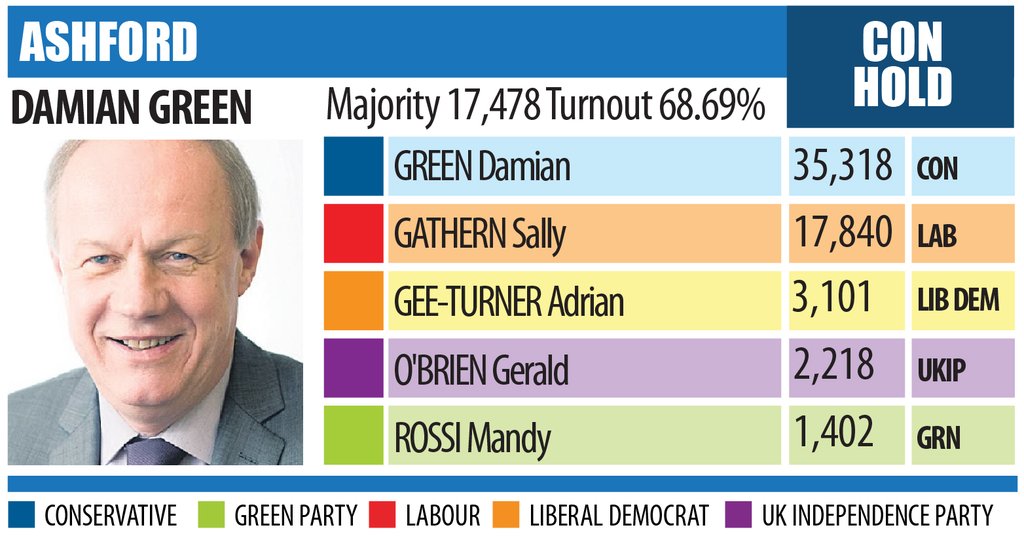 Conservative Damian Green has held his seat as Ashford’s MP in the general election.

The re-elected MP won the parliamentary election in the area with a majority of 17,478 after 35,318 constituents voted for him.

The result was announced following a count at the Stour Centre just before 3am.

This year’s results show that the Tory candidate gained more than 5,000 extra supporters on Thursday compared to the 2015 election, where he received 30,094 votes.

It is Mr Green’s sixth term as a MP for Ashford, who has now held the seat for 20 years.

“It’s the sixth time I’ve fought Ashford and we got 58% of the vote which is the highest percentage I’ve ever had.

“I’m really grateful to the people in Ashford for voting for me one more time.”

Talking about what he thought secured the win, the MP said: “I think it’s obviously a combination of the national campaign and I can’t hide now, I’ve been the MP for 20 years.

“People know me. They can either like or dislike the way I do the job, so it’s obviously very gratifying that nearly 60% of people voted for me, so I’m hugely grateful for that.

“I hope, and certainly the projection is, that we will still have a Conservative government led by Theresa May.

“I hope and expect that will be the final outcome, and we have these hugely important Brexit negotiations coming up over the next two years so it’s very important that we approach those in a constructive and determined spirit to get the best result for Britain because that will determine our prosperity – not just in the next few years – but for decades to come.”

He went on to thank both the counters on the night and the police: “Not just because they do a great job - but particularly in current circumstances -when it’s really important that we can hold a democratic election that doesn’t get disrupted by anyone.

“All across the country we’ve held a peaceful democratic election with tens of millions of people.”

Responding to talk of a possibile promotion, he said: “I think it’s extremely early to start thinking about that. I’ve just been re-elected for the MP for Ashford I’m delighted about that.

“Let’s get the national result in and see where we are before we decide about anything like that.”

The results were delivered earlier than expected in Ashford, beating the estimated result time of 3am.

Conservative Simon Howard-Smith said he was ‘excited’ to be elected as councillor for the Bockhanger ward in a Tory hold with 697 votes.

Meanwhile, Charles Suddards provided a Labour gain as the new councillor for the Victoria ward with 1,052 votes.

Damian Green makes his acceptance speech as he is reelected MP for Ashford #KentGE2017 pic.twitter.com/cnvf0yk31d