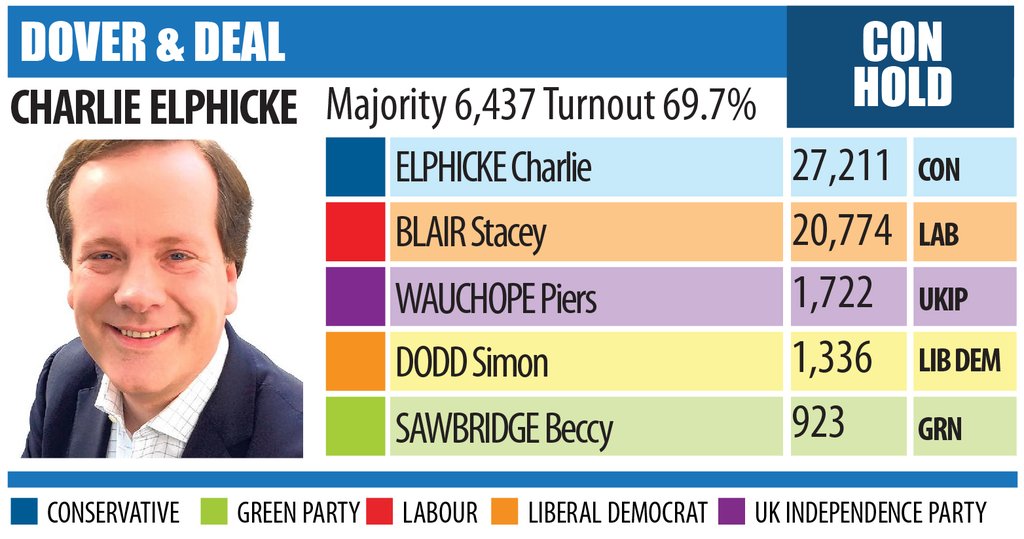 Conservative Charlie Elphicke is this morning starting his third term as MP for the Deal and Dover constituency.

In what was the first result to be announced in Kent, the St Margaret's resident topped the poll with 27,211 votes, increasing his majority to 6,437 from 6,294 two years ago.

Mr Elphicke said: "I'm so proud to have been re-elected as the member of parliament for Dover and Deal with an increased majority.

"It's a humbling experience and I'm looking forward to getting back to the job.

"We've been on an incredible journey in the seven years since 2010. Back then, our port was up for sale, we didn't get our fair share of healthcare, they said that we couldn't have the fast train because it couldn't go to villages like Deal. Now, today we've got hospitals built, the fast train goes to Deal, we saved the port and we've got hundreds of millions of pounds in investment.

"My promise to the people of Dover and Deal is we have a record of action and a promise of more."

The result was announced just before 2am at Dover Town Hall. Prior to that, Mr Elphicke had dubbed the election the most unpredictable he's ever seen.

Speaking afterwards, he said: "It was a completely unpredictable election. I came here thinking that I could be losing tonight or just clinging on and to have an increased majority on a night like tonight is a truly humbling experience.

"I want to say a big thank you to all the voters who put their trust in me. I'm going to work doubly hard."

When asked why he thought people had voted for him, he said: "I think they looked at our record, they looked at the work that we've done and they thought we were the party with a record of action within this community that they decided they'd trust us again and I'd like to thank you to the people of Dover and Deal for your trust."

Ms Sawbridge (Grn) said she felt like a winner throughout as people are engaging with her party's policies particularly on transport.

Mr Dodd reminded his members that a vote for the Liberal Democrats is never a wasted vote. He said he'll continue to work to ensure the ban on fox hunting is not repealed. Mr Wauchope (UKIP) did not attend the count. Mr Elphicke said : "On the podium I congratulated Stacey on the campaign she fought."She worked incredibly hard with her team. All of the candidates worked very hard indeed and it makes sure that we have a free and fair democracy. It's so important that we have that vista of choice that is the democratic process."He thanked his team of workers and volunteers for helping him to secure his seat.