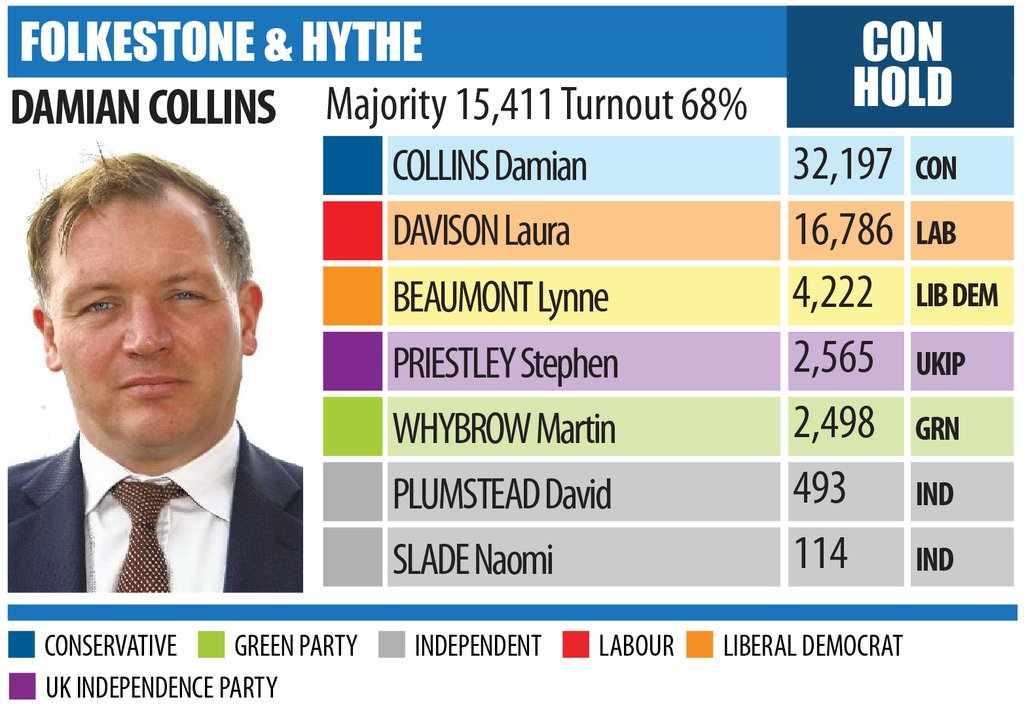 Conservative Damian Collins has been re-elected MP for Folkestone and Hythe.

The Tory candidate extended his majority from the 2015 election by 1,614 votes.

A strong result from Laura Davison for Labour saw the party jump into second place in the constituency.

She celebrated a “fantastic campaign” for the party gaining 8,847 more votes from 2015 when Claire Jeffrey, who has since defected to the Tories, stood for Labour.

His 15,411 majority is the second highest in the history of the constituency behind the 16,020 majority polled by Albert Costain in 1979.

It was a night of very little drama in Folkestone and Hythe as counting was carried out quickly and without any recounts.

"I'm determined that we continue to work hard to support the economic regeneration of this area and support the services people rely on.

"We were getting very strong feedback throughout the campaign and seemed clear to us a lot of people who voted Ukip last time were going to vote Conservative this time.

"We've seen the consolidation of the opposition vote with the Labour Party but at the same time the Conservatives extending its vote share as well.

"I think what I have to do is continue to work hard for everyone in the constituency regardless of how they voted.

"I think to support the economic regeneration of the district, we've seen falls in unemployment, increasing investment and the completion of the seafront in Folkestone will be absolutely key.

"I want to see more housing and more affordable housing - both to buy and rent - for young people in the district.

"Of course, [we need] to make sure we get financial investment in the NHS and schools we rely on too.

"I contacted Jeremy Hunt [the health secretary] and he said the Department for Health will review the funding for practices in Folkestone.

"Even if one management of a practice changes it doesn't mean the provision will be lost. The people of Folkestone will still have access to a GP.

"That may require the NHS to pay for new GPs to come into the area or to recommission the contract to make sure the service is provided.

"I'm determined to make sure the level of service people need is there and the NHS puts in whatever resources is necessary.

"We've seen with intervention of the CQC with Folkestone Central practice is when a practice gets into difficulties, the NHS doesn't sit back and it intervenes and puts more resources to support that practice so that it gets back to the required standard.

"When a group of GPs hand in the contract it is the job of the NHS to recommission with an alternative provider.

"It's a very important priority for me now as is supporting the economic regeneration and bringing more investment to the area."

Speaking to KentOnline, a delighted Laura Davison, said: "It's been a fantastic campaign. I'm really pleased with the result. I want to thank everyone who voted and who supported the campaign.

"Just because things have been a certain way for a long time doesn't mean they have to continue to be that way."

Explaining why she thought the Labour vote had seen a resurgence in Folkestone and Hythe, Ms Davison said: "I think it's about people re-engaging in politics. I think that has a lot to do with Jeremy Corbyn and the way he has enthused people and reached out and is talking about things that affect people's lives.

"People have begun to see the Tory record in government is one of failure."

It will be an important two years for Labour in Folkestone and Hythe as they look to build on the gains made during this election.

"We have started lots of conversations with people during this campaign," Ms Davison said. "Some will have voted Labour and others will still be thinking about it.

"I think we need to carry on having those conversations with people going forward.

"We're not going anywhere, this is just the start of it.

"We'll have a campaign meeting on Sunday and we've got a job to do.

"There's a doctors' surgery closing in the and a leisure centre due to close and we're very worried about what's going to happen in schools if there are budget cuts.

"We need to work on all of these issues, working with people and development is another thing people are concerned about and we need to make sure we're working with local people on these things, not ignoring them."