Thousands have come together to watch this year's Vaisakhi celebrations as they fill the streets with music, dancing and colour.

The religious and cultural extravaganza is one of the most important dates in the calendar for Gravesend's Sikh community.

Enjoyed by residents of all races and cultures, it marks the year Sikhism was born as a collective faith, or the birth of the Khalsa.

Excited crowds waited outside the Guru Nanak Darbar Gurdwara in the morning as the Nagar Kirtan, or procession, began its journey through Gravesend.

Davinder Kullar who is partially sighted kitted out his guide dog Archie in a headscarf which prompted passersby to say "look it's a Vaisakhi dog".

His friend Jagdeep Sehmbi said: "We've been coming here all our lives, my daughter Sofia has been coming since she was two.

"We've just seen her grandmother who is singing on one of the floats."

Spectators were treated to a lavish display of food and entertainment as they enjoyed one of the biggest Vaisakhi celebrations in the country.

After leaving the temple via Guru Nanak Marg, off Saddington Street, the parade moved across the town, before returning at 2.30pm. 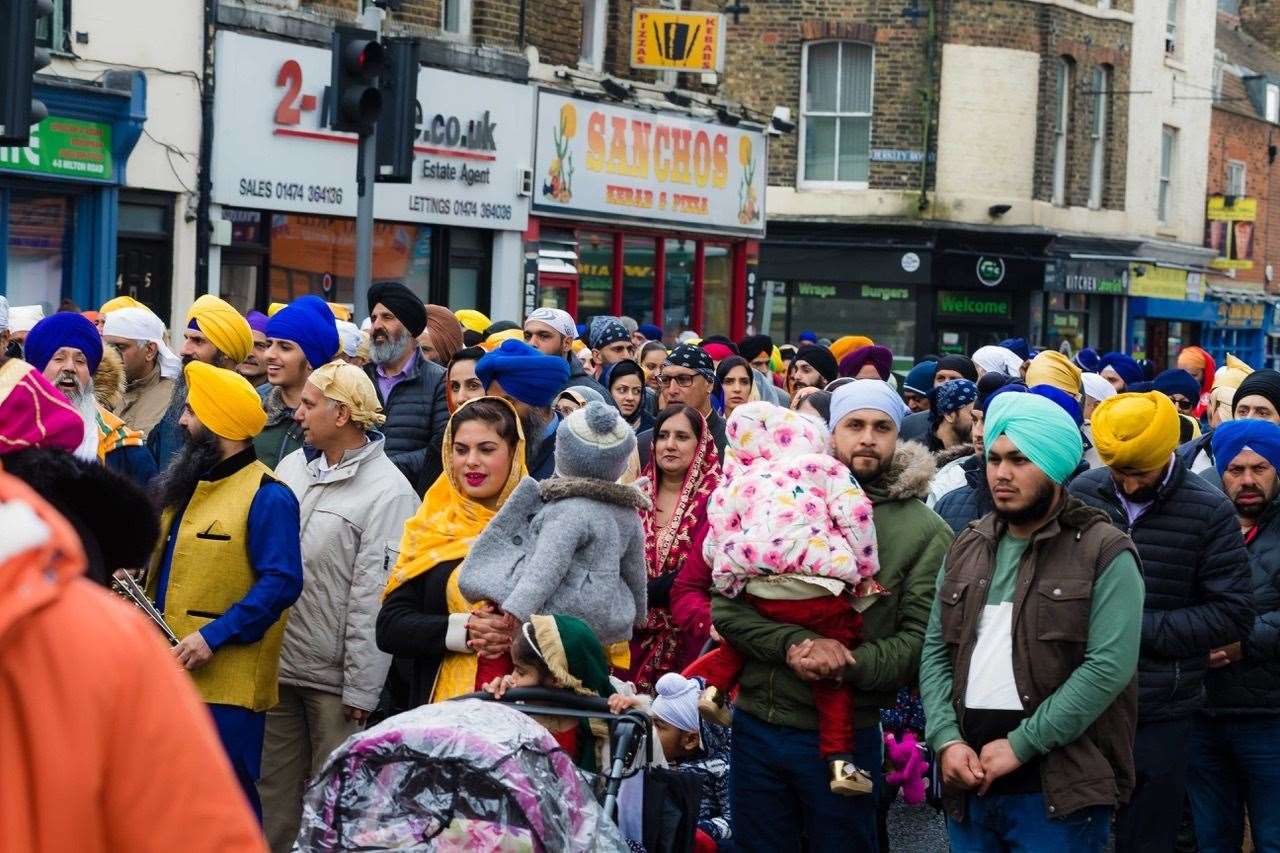 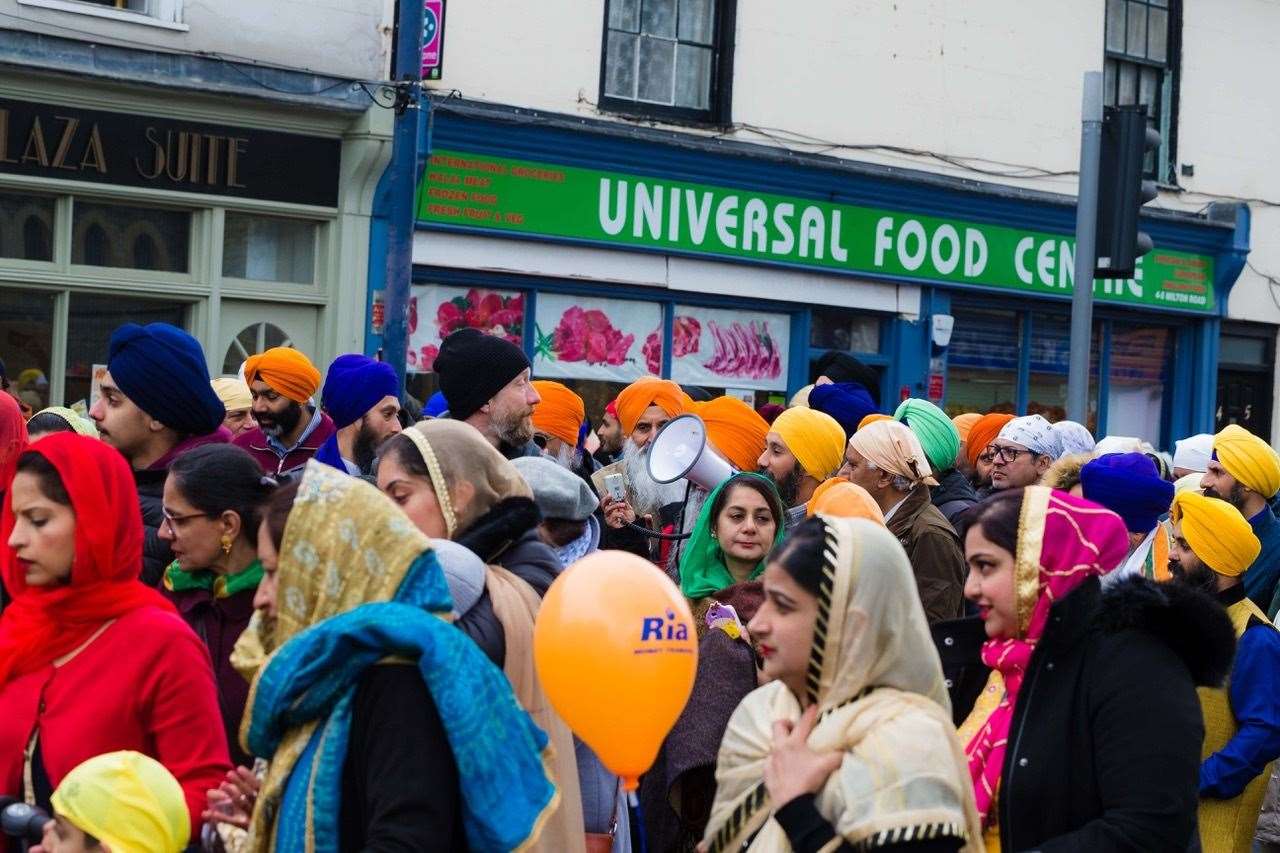 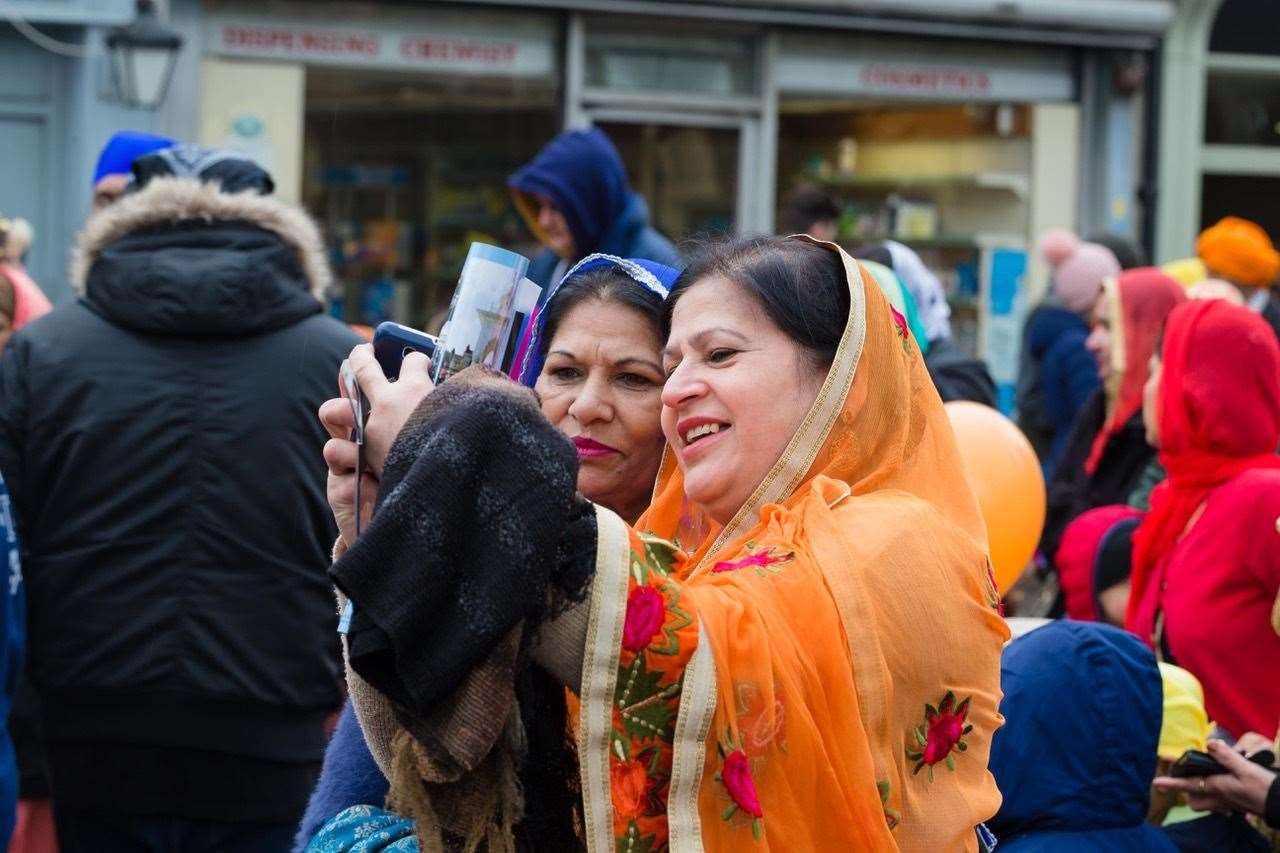 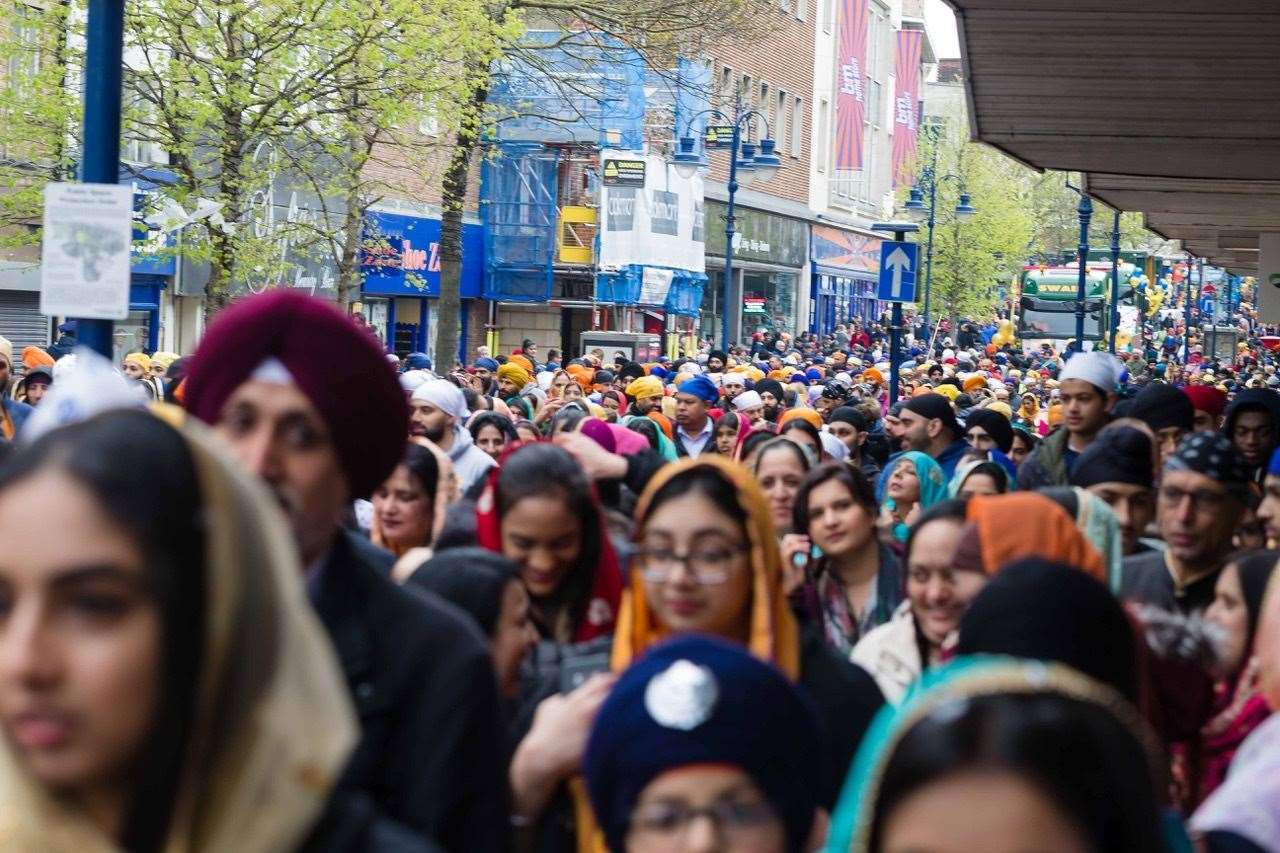 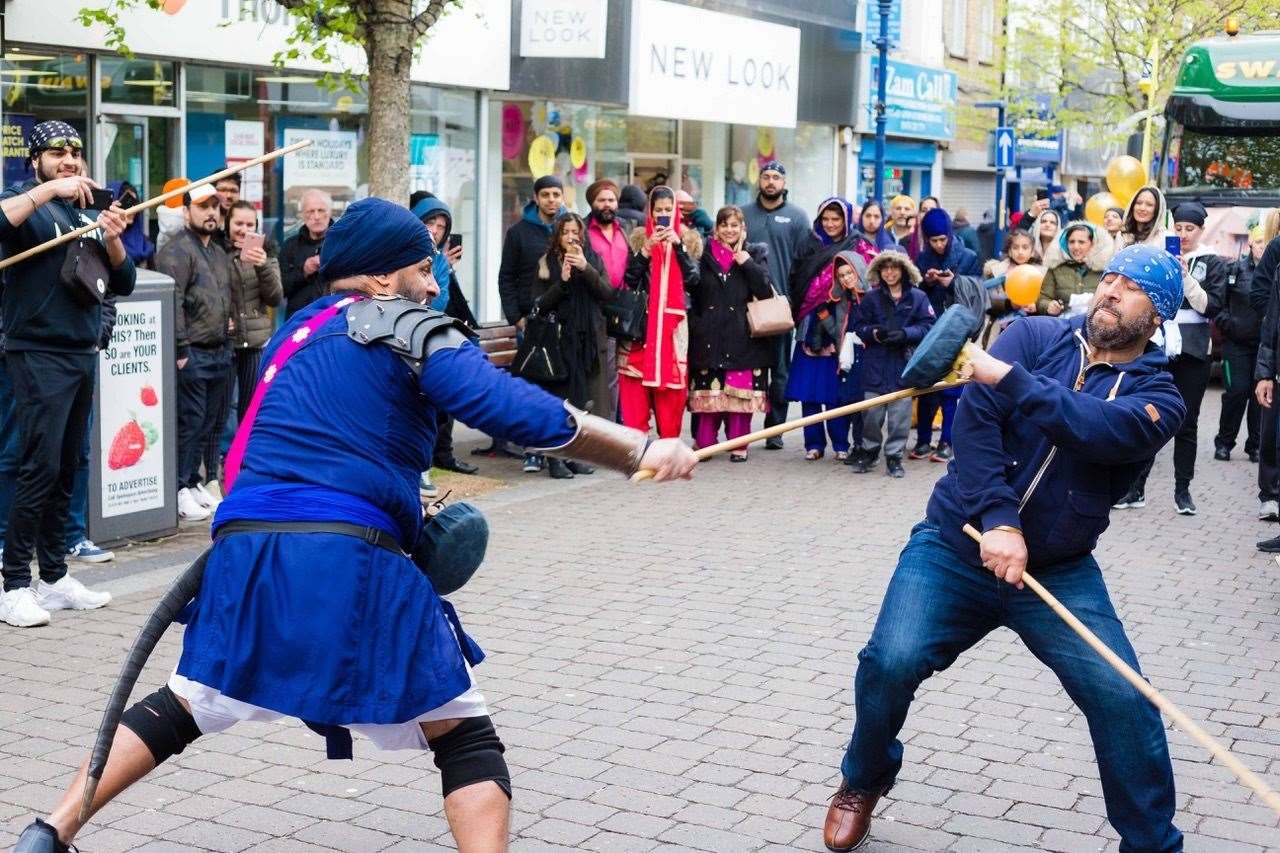 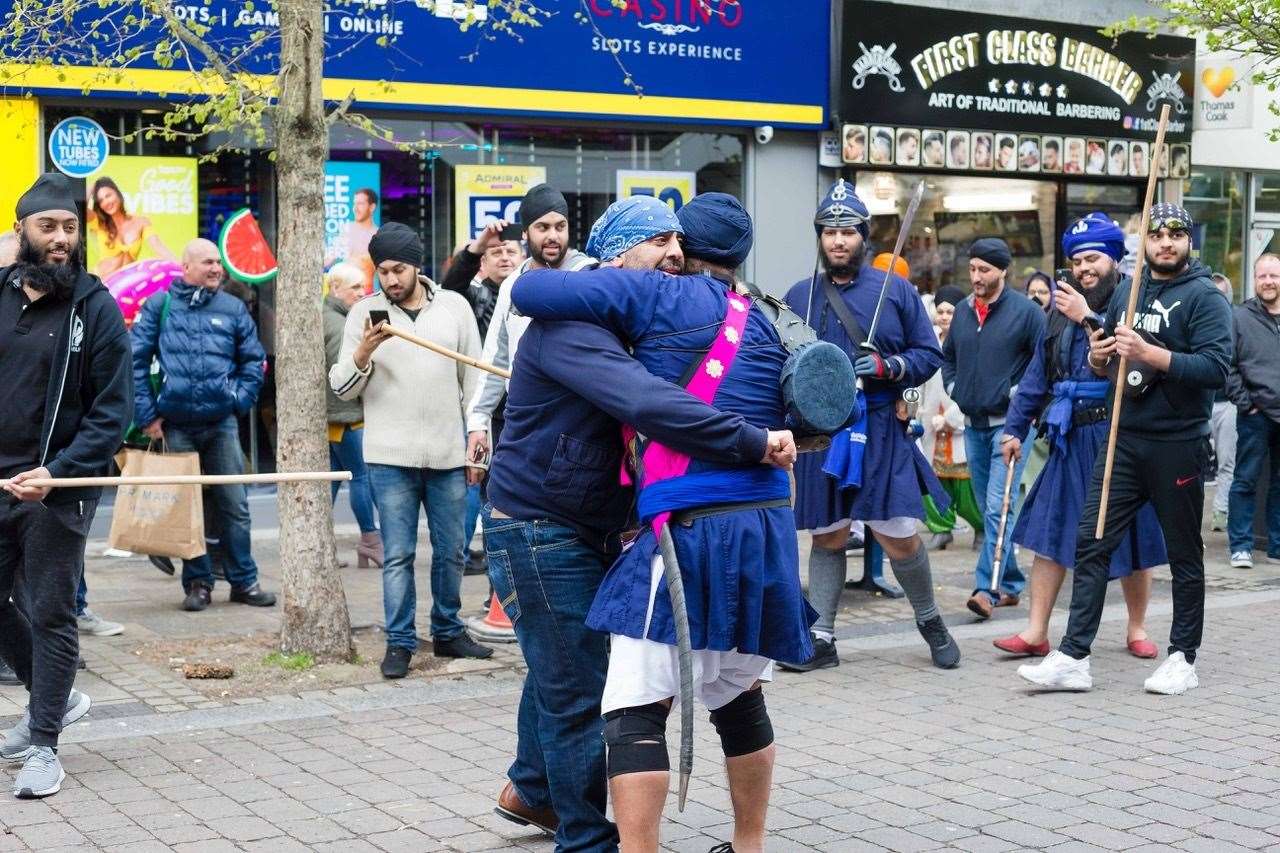 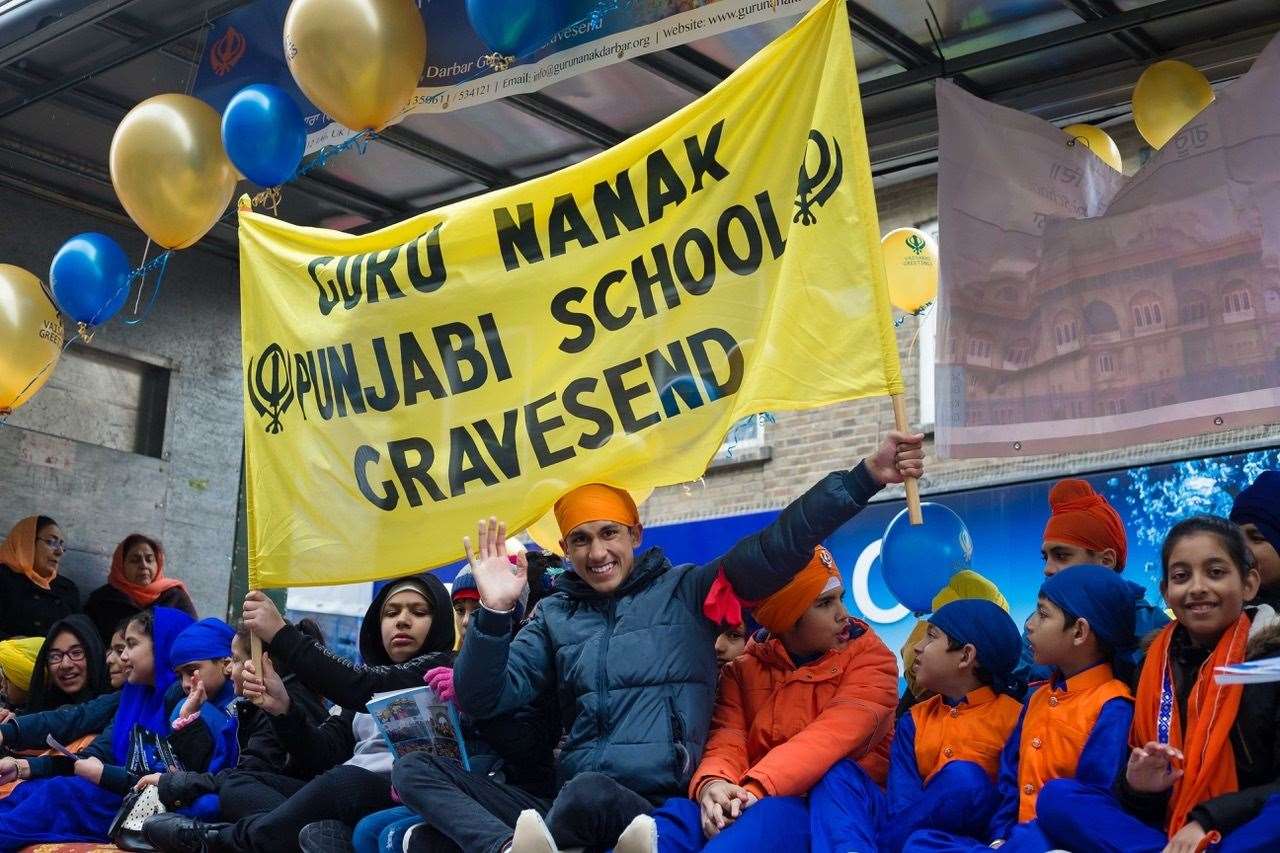 It was led by the Panj Pyare, or five beloved ones, and flag-bearers followed by the Guru Granth Sahib - the Sikh holy scriptures - on a special model of the Darbar Sahib, or Golden Temple.

Everyone was hugging and saying Vadaiya which means congratulations in Punjabi.

A Dharmic Mela, or religious festival, will continue in the grounds of the Gurdwara until around 6.30pm, and all are welcome.

Brenda Harcos, Natalie Horncastle, Shannon Presland and Sienna Horncastle braved the cold weather to watch the beginnning of the procession.

Natalie said: "We run Bussels and Breeches, in Wellington we worked in conjunction with The Woodville Halls to make their balloons for Vaisahki.

"But we're here to support the Sikh community, it's an amazing day."

Nivedita Nimonkar, her son Abhinav Nimonkar and her parents Shailaja jog and Pradeep jog, went along at around midday.

Mrs Nimonkar said: "We're originally from India, we moved to Gravesend so my husband could work for the NHS two years ago to this day.

"So it's not only Vaisahki for us it's our two year Gravesend anniversary."

It includes singing, music and a funfair at the magnificent building, which is the largest Sikh temple in the UK.

There will also be a range of stalls, representing official agencies, charities and businesses.

One of those was St Joseph's Convent Preparatory School, in Old Road East, Gravesend.

Teacher Gagan Garcha said: "We're primarily a catholic school but we're here to support all of the different communities and all our students who celebrate Vaisarkhi."

Tweet us your pictures and videos @KMGravesend, or email us at gravesendmessenger@thekmgroup.co.uk