Almost 60 people have been treated for carbon monoxide poisoning after a major chemical leak in Maidstone this evening.

More than 40 firefighters, hazardous material officers and a specialist chemical unit were all called to an industrial estate near Rumwood Green Farm, off Sutton Road, Langley just before 3pm.

A Kent Fire and Rescue Service spokesman said paramedics were at one stage looking after 57 people experiencing breathing difficulties.

None were considered to be in a serious condition.

The number of patients being treated was reduced to 45 just after 6pm, and one person was taken to Tunbridge Wells Hospital for further assessment.

Maidstone and Tunbridge Wells hospitals both erected hazardous material tents at their sites.

At 5pm seven fire crews were at the site, working with hazardous material officers to establish what the chemical was.

An air ambulance landed nearby and took off from the site at around 6pm, while several ambulances and fire engines also swiftly departed, though two minibuses were then seen entering just before 7pm.

Both minibuses have now left the site and both were transporting people with Charltons Farm uniforms on and some where covered with foil blankets.

The fire service confirmed the incident had been contained to the site.

A spokesman for Maidstone and Tunbridge Wells NHS Trust said: “As a precautionary measure a hazardous materials tent has been erected outside the emergency department to help us manage patients.

“While our Emergency Departments are open as normal, we would encourage people to only use our EDs for emergency and life-threatening situations during this period to help us focus our resources on those who need it most.”

Self-employed businessman Richard Hurley, 32, was at Maidstone Hospital having booked an appointment and described the scene as one of "lockdown", with people only being allowed inside via an alternative entrance.

He said: "Big white hazard tents have been set up outside. There's a lot of activity, I'd describe it as a full-scale operation.

"I can see five police cars, a couple of vans and now there are quite a few ambulances queuing up.

"I haven't seen anyone inside the hospital, I don't know whether they've evacuated patients or moved them to another part of the site, perhaps.

"They have had a big container delivered, but I'm not sure what it's for.

Another patient, Paul Martin, from Larkfield, was awaiting treatment at Maidstone Hospital for a foot injury sustained on his 52nd birthday, but was advised to leave.

The warehouse manager, who arrived at the Hermitage Lane hospital around 4pm said: "A nurse came out and told us that all walking wounded would likely not be seen while they dealt with this emergency.

"Luckily I'd only waited 20 minutes in total. Outside they were setting up a marquee-type thing with nurses in hazard suits and police were taping off the entire area." 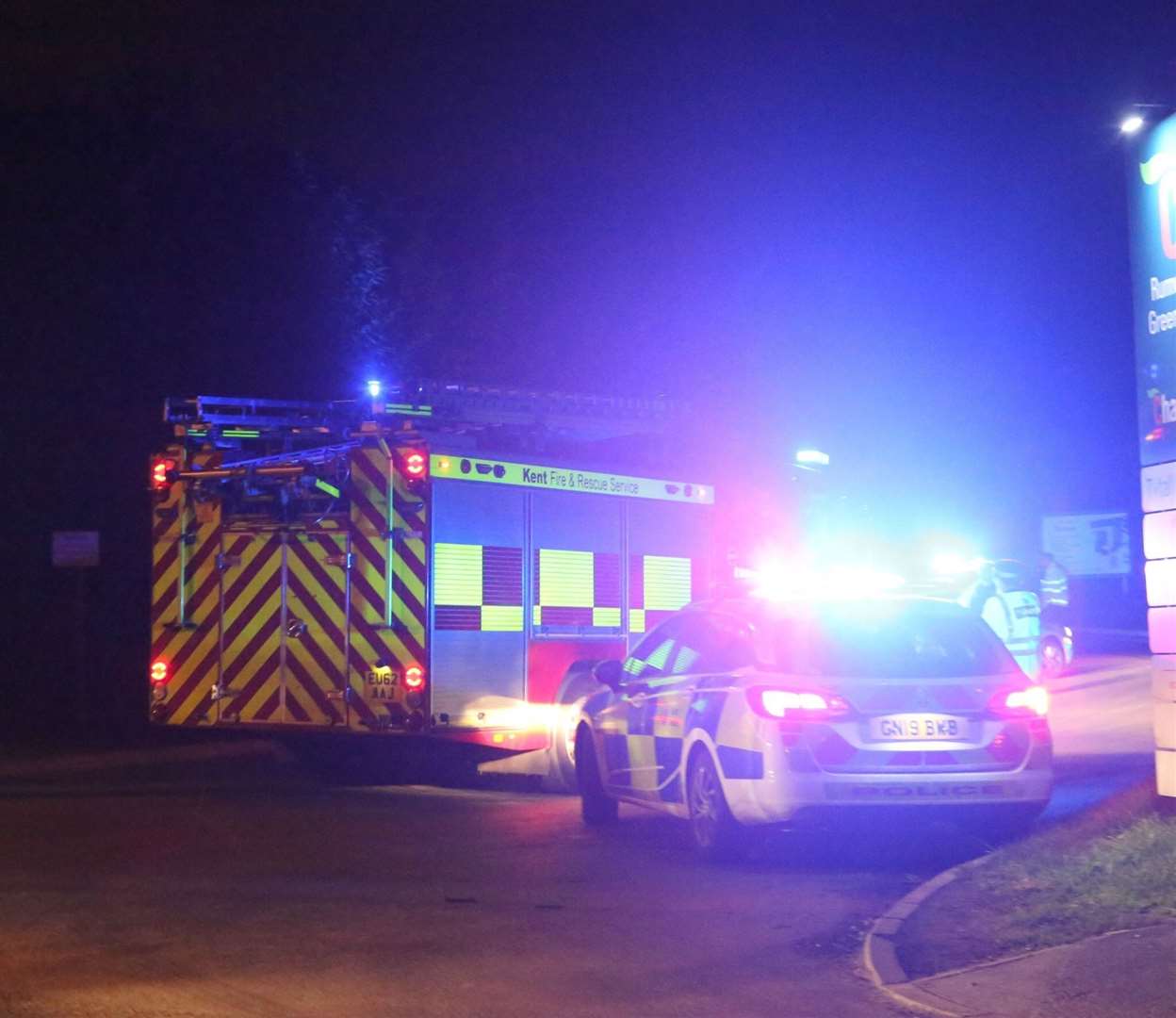 Witnesses said they'd heard the William Harvey Hospital in Ashford and Tunbridge Wells Hospital had also been put on alert in response to the incident.

An ambulance spokesman said: "We are responding to an incident in Sutton Road, Langley near Maidstone, following a suspected chemical leak at a premises reported to us at approximately 2.20pm today.

"Ambulance crews, including our Hazardous Area Response Team and the air ambulance service, are at the scene.

"We have assessed and treated 57 people at the scene for breathing difficulties.

"A number have been discharged from our care.

"No patients are currently in a serious condition."

At the scene in Langley, staff have been told to walk off the site and not take anything with them.

Witnesses said one woman is stranded as she left behind phone, keys and her car and has no way of getting home.

One car park is taped off and it is unclear how long it will be off limits for, with officers not even allowed to access it on behalf of staff.

Some may not have access to their cars until tomorrow, police at the scene say.

Maidstone Borough Council has also set-up a temporary rest centre to accommodate 45 people who were evacuated from the scene this evening because the incident involving carbon monoxide meant they had to leave the area.

They were being bussed to the Maidstone Leisure Centre and will be provided with accommodation by the council until it has been informed that it is safe for them to return to the site.

Charltons Farm and fruit supplier Soloberry, both based on Sutton Road, declined to comment when approached.