Bean there, done that and got the certifcate!

Bean there, done that and got the certifcate!

Listed buildings such as Len House and Granada House in Maidstone look set to be converted to mixed use blocks, while a 15-storey tower block could dominate the skyline.

Altogether more than 1,000 homes could be built in the County Town, with offices, shops and a riverside park among the proposed amenities.

The council's preferred vision for the Grade II listed buildings could add six stories to the Gala Bingo site. A mixed-use proposal would leave space at the bingo site for a new bingo hall along with other commercial use.

Despite being the council's preferred option, it concedes such a change would be felt.

Its document reads: "The main disadvantages of this scenario will be the loss of the iconic buildings of 20th century historic

interest and the viability/practicalities of delivering the scheme, given the costs of relocating Gala bingo and demolishing the buildings and the relatively constrained site size/access."

It would bring around 71 homes to the town. Parking outside the old Rootes building, currently occupied by the outgoing Robins and Day Peugeot could be converted into housing.

The council also hopes its unique art-deco design could attract companies. Its document reads: "The light, iconic nature of the

building could make it particularly desirable to design/media/marketing companies who would appreciate its unique heritage and quality and also benefit from its high profile, central location."

The development could bring up to 67 homes, with some being delivered in parking spaces opposite Maidstone Magistrates Court.

Up to 650 homes could be built along St Peter's Street. 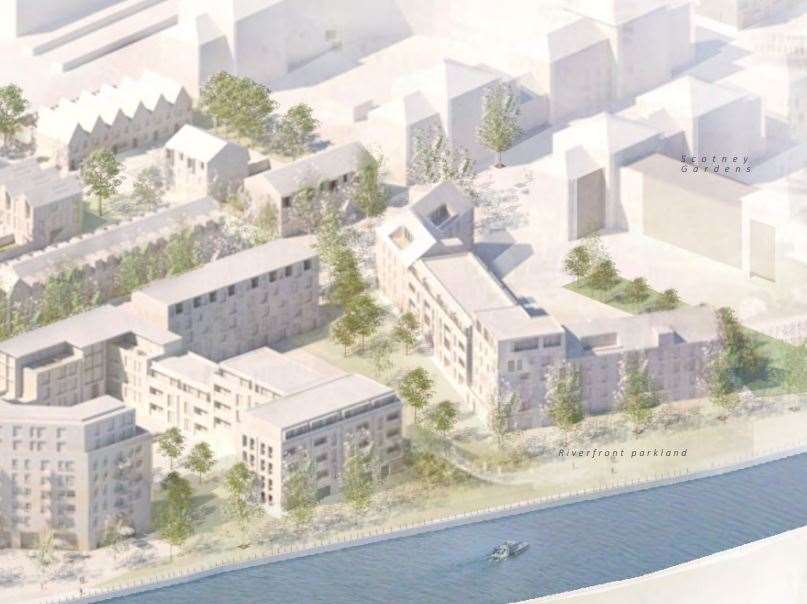 Asda Living and TK Maxx have long leases next to the River Medway, but the council hopes development could come in after 2030, bringing in around 220 homes from around 2030.

Once built council documents suggest there could be room for a riverside restaurants and a park, not unlike the Kent Messenger's own vision for the town, though slightly further up river.

The future of the Powerhub and Baltic Wharf looks set to change far sooner however.

MBC has designs to convert the former munitions factory into 220 flats and town houses in the next five years.

The council also thinks there's room for 25 town houses and 95 apartments in land around Maidstone Barracks.

It estimates such a development would take between five and 10 years to deliver homes on the site, which counts Jewson amongst its owners. Lidl and Matalan could be demolished and replaced with a 15-storey tower block housing 281 flats.

The block would dwarf the likes of 13-storey Miller Heights and the 17-storey Springfield Park development, which is still being built.

If the high rise vision becomes a reality, the bottom floor could be used for a gym, cafes or convenience stores.

The council document reads: "If a residential led scheme comes forward, it will still be important to include some other, mixed uses at the ground floor level where footfall will be greatest, such as at the eastern end of the Broadway and along Hart Street."

It adds: " If there is market demand, consideration should also be given to the incorporation of large retail units as an integral part of the development for the northern site."

Up to 201 homes could replace the site where B&Q currently is, next to Maidstone West station. 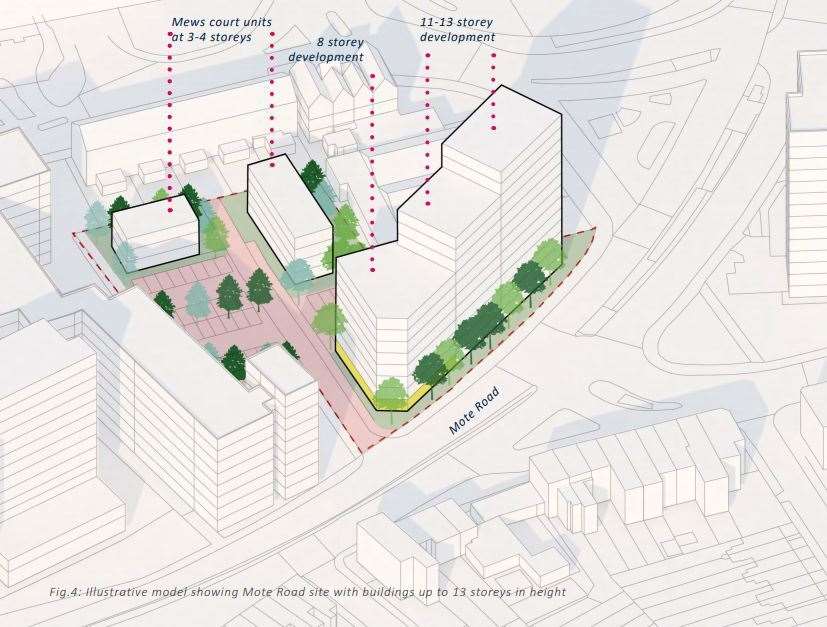 The car park is currently operated by London and Cambridge Ltd and developers are being sought to create homes and office space.

In its documents the council accepts homes would have to built on site first, in order to provide space for around 2,000sqmetres of office space.

MBC suggests any development could rise up to 13 storeys, while there would be space for around 84 homes.

Parking would be kept internal with a courtyard on the site.

There is no planning application in for any of these developments, if approved Maidstone Borough Council would look for potential developers to pick up the projects.

The proposals will be discussed at a committee meeting on Tuesday.

Read more: All the latest from Maidstone.