The M20 is still closed today (Saturday, August 27) and a major incident has been declared after a lorry struck a pedestrian bridge.

Police officers have now left the scene after the bridge crossing the motorway collapsed between junction four for Leybourne and junction three for Borough Green.

Both sides of the carriageway are still shut today while emergency work is carried out at the scene.

Scroll down for picture gallery

The M26 is also closed coast-bound, as investigation work continues.

A digger being transported on the back of a lorry hit the bridge on the hard shoulder of the London-bound carriageway between junctions four and three shortly after 12.05pm yesterday.

Part of the bridge fell onto a second lorry, the driver of which was treated for shock at the scene.

A motorcyclist in his 50s who fell from his bike at the time of the incident was also taken to Tunbridge Wells hospital with suspected broken ribs.

Police say local roads including the A20 are very congested and are urging motorists to avoid the area and find alternative routes if possible.

Police spokesman Steve Knight said yesterday: "We continue to support Highways England in ensuring the motorway is reopened as quickly as possible with the safety of all road-users in mind. 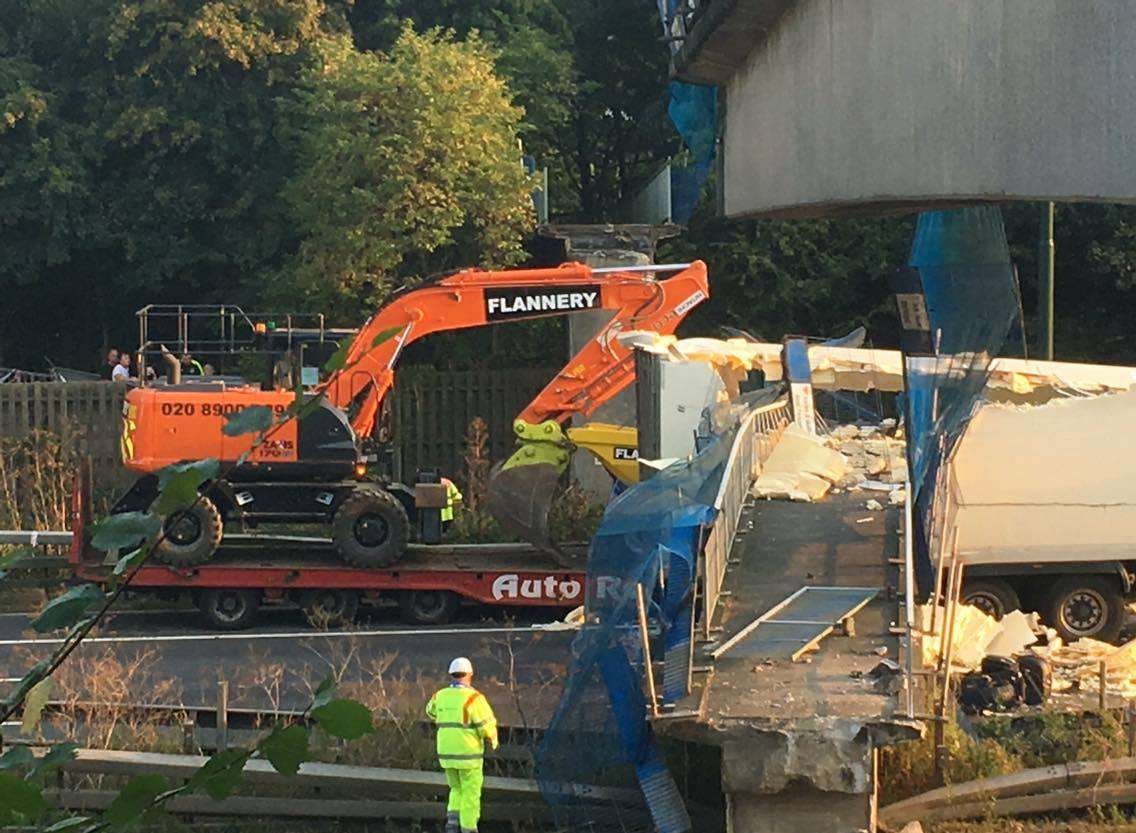 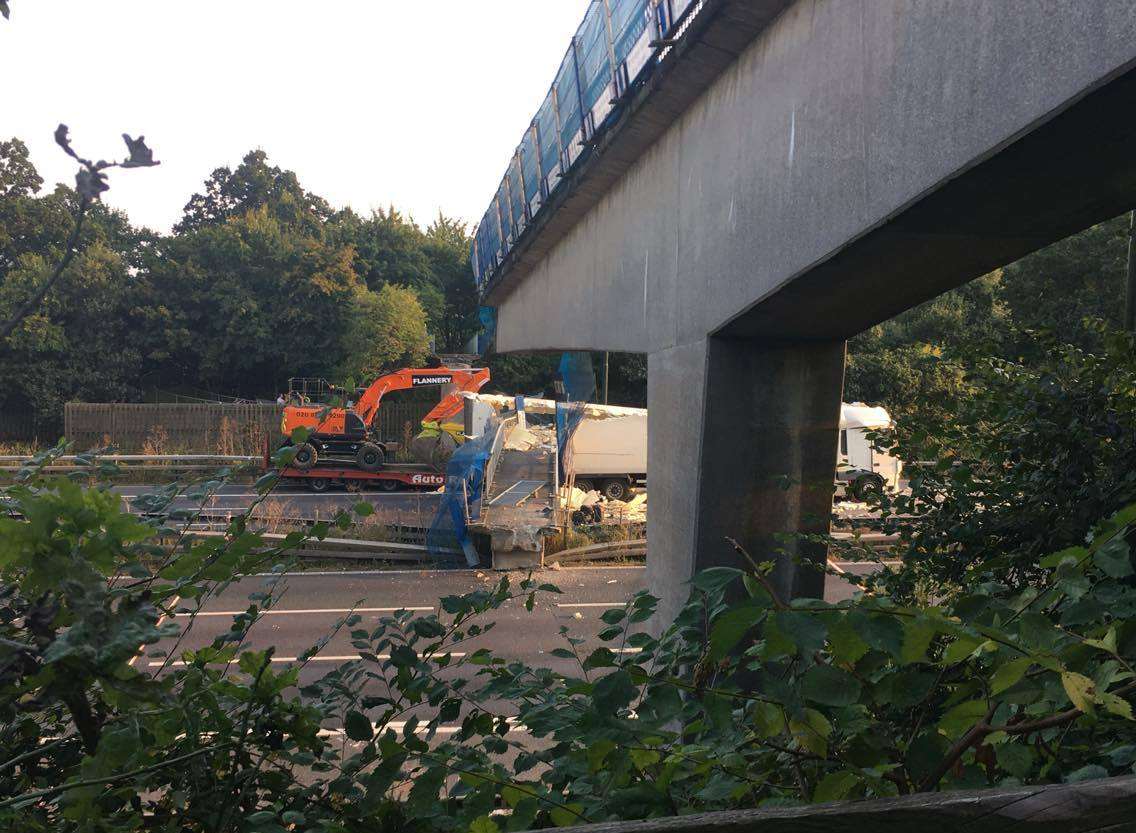 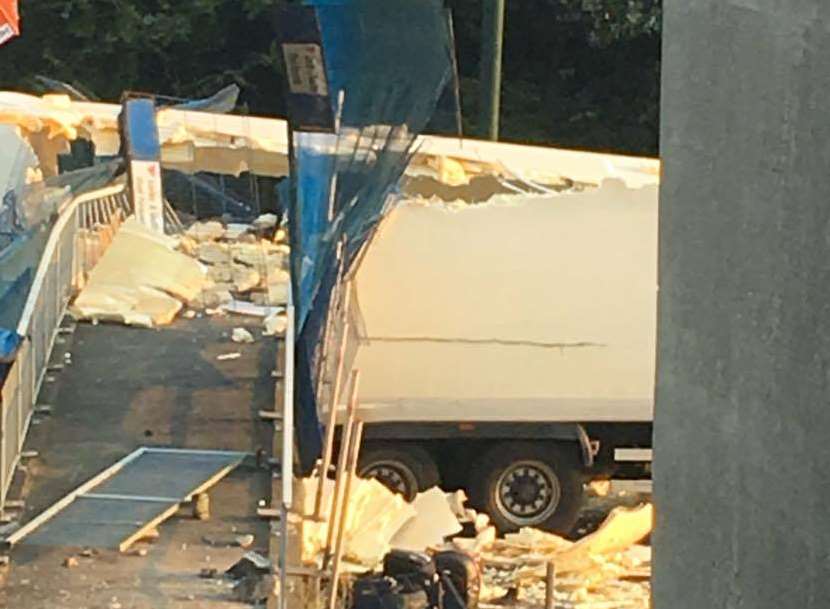 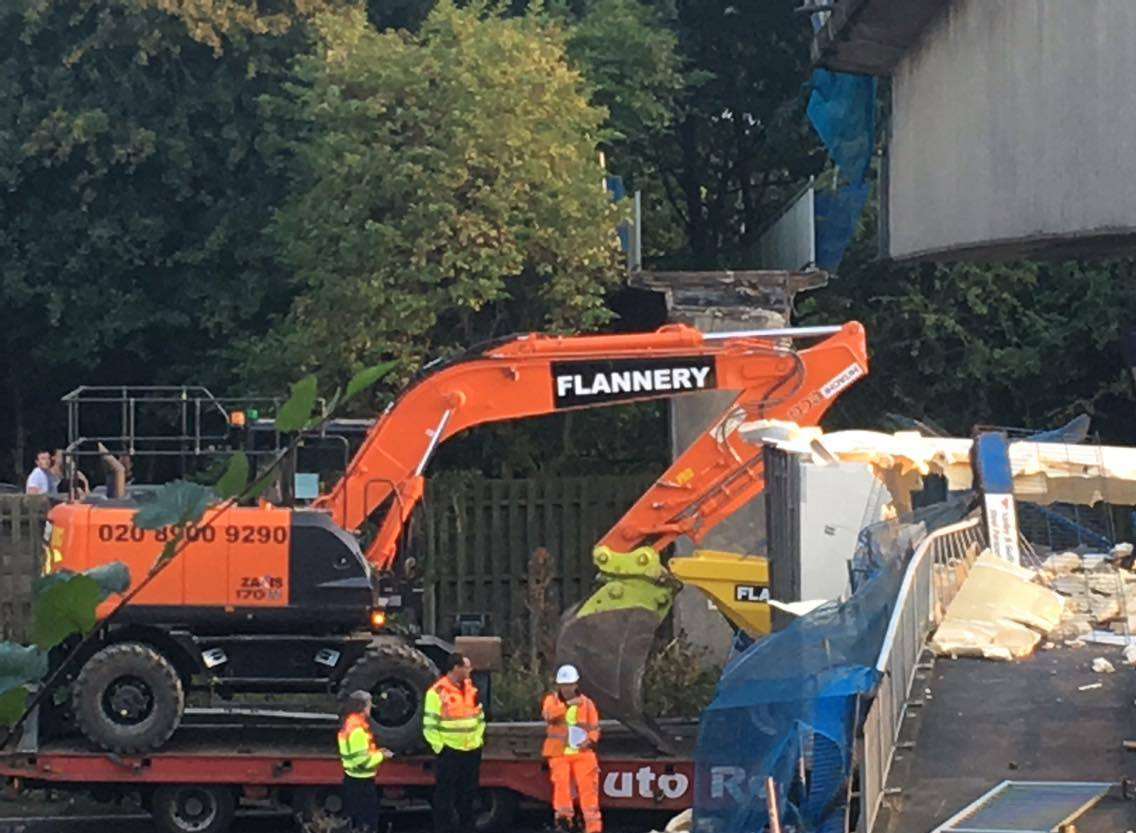 "Officers from our serious collision investigation unit are now carrying out inquiries into the circumstances behind the incident, and are appealing for witnesses to get in touch by calling the appeal line on 01622 798538 quoting reference 27-0690 or by emailing sciu.td@kent.pnn.police.uk.

Scroll down for more video and audio

Earlier, witnesses said they believed a digger on the back of one of the lorries involved had caused the damage and the motorcyclist was forced to throw himself off his bike to avoid danger.

Alex Magaisa was driving with his family to Gatwick for a trip to Belfast and was right next to one of the lorries when the bridge collapsed.

The 41-year-old University of Kent lecturer from Canterbury told Kent Online: "It was very frightening. Suddenly there was debris in the road. I just drove through it. Some of it may have hit the car.

"The bridge hit the high lorries first, which is what may have saved us. I feel very lucky, and it is only now starting to sink in.

"We stopped and went back and there were no fatalities.

The M20 will remain closed until at least later today and probably a lot longer, Highways England have said.

At its height queues stretched as far back as junction 6. Traffic on the London-bound side was turned around.

The M25 was also blocked before junction 5 for the M26 while traffic management measures were introduced to deal with fallout from the problems on the M20.

Driver Natasha Najam arrived at the scene with her husband and children just after the bridge collapsed. She said: "We got on at junction three having just got off the M25. We were about to go on holiday for the weekend.

"Things slowed right down and directly in front of us we could see a bridge half collapsed. Look at it, it was pretty unimaginable.

"And on the other side because I was driving could see half of it had landed on top of one lorry and there must have been a lot of traffic behind it as there was a crowd already gathering on the motorway.

"The other half of the bridge is just hanging over the coastbound section.

Witness Kelly Conners from Aylesham was heading to Leatherhead with her partner and her 18-month-old child when she saw the collapse. She said: "We are about 20 cars away from the bridge.

We just pulling up and my partner said look at the bridge it's falling down. It Looks like a crane has hit the bridge and knocked it down. But on the other side of the road the bridge is cracking as well."

"We could have been under that bridge."

He told Kent Online: "My wife and I were in our garden at Offham when I hear a massive metallic clanging sound, rather like as if someone had dropped a large sheet of steel.

"I just hoped when I hear it that nobody had been injured and it is good to hear that the accident has resulted in only minor personal injuries."

Tom Tugendhat, MP for Tonbridge, Edenbridge and Malling, told Kent Online: "I'm extremely concerned because the closure of the motorway could push a lot of the traffic into communities around there, communities like Ryarsh, Allington.

"Borough Green and West Malling are already often impacted by the traffic for Operation Stack so we know the impact could and can be extremely severe.

"I am however extremely impressed by the speed at which the police responded. I think they have done a very good job so far and we are all waiting for what structural engineers say about the broken structure and exactly what that means for everyone else."

The bank holiday weekend is one of the busiest periods of the year for the M20 with millions of drivers taking to the motorway each day.

As well as disrupting many family breaks, today's closure has also forced the cancellation of several football matches.

Kick off at Folkestone Invicta for their home game with Suffolk side Needham Market was delayed until 4pm.

Listen to kmfm for the latest news and travel updates.