To the casual observer today, St Mary's Island looks to be little more than what it is – an attractive waterside development rising from reclaimed marshland.

But scratch the surface of its past and a unique and fascinating history reveals itself.

It is a tapestry which runs all the way back to the Romans and spans centuries dominated by this country's rich naval traditions, its struggles in conflict and the tragedies of those caught up in it.

Inextricably linked to what was Chatham's famous dockyard, St Mary's Island is now home to some 3,000 people living in peace and harmony.

Turn back the clock and you will find buried how it bore witness to the development of the weapons of war and the lives and, sadly the deaths, of those who played their part in waging it.

With work just beginning on the final phase of the island's transformation from gloomy, foreboding wasteland to a vibrant, thriving community, we have delved back into its colourful past.

The island itself, which juts out into a sweeping bend in the River Medway, was originally cut off from the mainland by St Mary's Creek. It ran from Gillingham on one side to Lower Upnor on the other and filled with water at high tide.

There is evidence that the Romans were the first to make use of the island, building a road across marshes criss-crossed by tidal channels and running a ferry across the river to the Hoo Peninsula.

Remarkably, the route remained operational into the 1890s and was known as the Prince's Bridge.

But the island's importance did not begin to take shape until the establishment of England's first Royal Dockyard at Chatham by Queen Elizabeth I in the 16th century.

St Mary's Creek became a hive of activity with the creation of three basins for shipbuilding, starting a tradition which reached its zenith with the construction of Admiral Nelson's flagship at Trafalgar, HMS Victory.

Chatham was to become synonymous with Britain's emergence as a global sea power and continued to play a crucial role in numerous conflicts, culminating in two world wars.

As the dockyard grew, a fort was built to protect it at the Gillingham end of the creek and at the other a chain was stretched across the river to a wheelhouse at Upnor Castle where it could be raised in times of danger. Famously, it failed to stop the Dutch Raid on the River Medway in June 1667, dubbed one of the worst defeats in the Royal Navy's history.

It was during the Napoleonic wars that the island's history plummeted to its darkest and most macabre times.

With a lack of accommodation for French prisoners-of-war, the authorities came up with the cheap alternative of locking them up on the floating de-masted hulks of redundant warships moored on the Medway. The inmates were cooped up in cramped conditions, with precious little natural light and poor provisions and facilities.

Unsurprisingly, disease was rife and deaths quickly multiplied with bodies buried in mass graves on the island. Many years later they were exhumed and laid to rest at St George's Church, now the St George's Centre, within the grounds of the Universities at Medway.

The island really became an integral part of the dockyard during an expansion programme in the 1840s and 1850s when more than 200 acres was purchased by the Crown. This meant the whole of the island was now in the hands of the Crown and the dockyard.

As the dockyard continued to grow in the 1860s, the three structured basins that stand between the island and the mainland that we see today were constructed. Sixty foot timber piles were driven into the marshy ground to provide a firm foundation for the basins and the excavated mud was spread across the island raising it to six feet above the spring tide level.

A 21-acre brickfield was created, turning out 23,000 bricks a week and about 110 million bricks were manufactured overall.

Meanwhile, work on a sea wall around the island had been completed using convict labour effectively laying the barrier for the community who live there today. At one point there were more than 1,000 prisoners working on site.

The advent of nuclear power in the latter half of the last century was to impact more major changes for the island.

The Royal Navy used Chatham as one of the bases for re-fitting its nuclear-powered submarines.

Areas were used for dumping waste from the work which resulted in a massive clean-up operation once the decision had been made to use the island for high-class housing.

Almost 1.5 million tonnes of contaminated soil had to be removed and safely transported elsewhere for disposal.

Construction could only begin once the most stringent tests had been carried out to determine that the land was free from contamination. PR people promoting the scheme hailed it as "the cleanest building site in the UK".

The controversial decision to close Chatham Dockyard and the navy base in 1984 was met with understandable dismay in the Medway Towns, which largely owed their existence to the livelihoods that were earned there.

The dockyard had been the biggest local employer for centuries and although the effects of the closure are, to some extent, still being felt today, the ground that it stood on has, like St Mary's Island, been transformed.

In its place there is Chatham Historic Dockyard, a popular award-winning tourist attraction with its fine collection of restored listed buildings which are used as a backdrop for television and film shoots.

Chatham Maritime boasts a mix of about 80 shops at the Dockside Outlet Centre, restaurants, bars, leisure facilities and a gin distillery. It is also home to the Universities at Medway and with it comes a young, lively student community.

The final phase of the redevelopment, St Mary's Island, will bring to a conclusion an ambitious project which started in the late 1990s to create Britain's first – and so far only – strategically planned island development.

It was started by South East England Development Agency (SEEDA) in conjunction with Countryside Properties as part of what was then one of Europe's largest regeneration schemes. 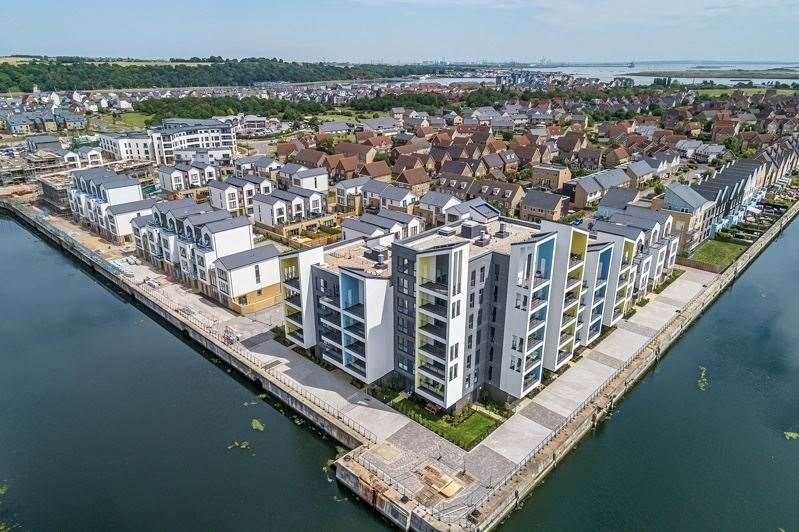 It has won a clutch of prestigious awards, including the Building for Life Award for the distinctive Fishing Village, and the National Home Builders' Design Award for best brownfield development.

But it is its residents, or "islanders" as they like to call themselves, who make a community and the one on St Mary's Island is an energetic and thriving one.

Various clubs and societies have sprung up over the years revolving around the community centre and there is a primary school and doctors' surgery, children's play areas and riverside pathways.

The final phase, Azure, has been launched this month creating a new district with homes overlooking the marina and some even offering a private berth.

Julian Perry, chief executive of Chatham Maritime Trust, said: "As the Trust that manages the Chatham Maritime Estate, we are looking forward to the completion of housing on St Mary’s Island by Countryside Properties. "Work commenced on the St Mary’s Island housing construction in the mid-90s and so after circa 25 years we are now seeing the fulfilment of the original vision for the creation of a world class housing development.

"St Mary’s Island forms the primary element of residential development on Chatham Maritime, alongside the existing leisure, commercial and educational sectors that together form the whole Chatham Maritime Estate.

"This combination makes Chatham Maritime an excellent place to live, work, study and play, which is a primary reason for Chatham Maritime being so attractive to potential homeowners and businesses alike looking to relocate.

"It is also a popular destination for those just seeking some leisure time, with a great selection of shops, restaurants and bars.”