Historic 'covered way' on Sheppey could be demolished

One of Sheppey's hidden wartime relics is now so dangerous it faces demolition.

The 'covered way' which runs parallel to the coast road between Barton's Point Coastal Park at Sheerness and the White House restaurant at Minster was built to protect the public from being hit by stray bullets and shells from a Royal Navy firing range.

For years it was used as a short cut for cyclists and as part of a cross-country course for Sheerness Technical School and Sheerness Secondary School pupils.

But now whole sections of its concrete roof have crumbled and many of its iron supports are rusted through and hanging loose.

Swale's outgoing mayor Cllr Ken Ingleton, 76, who also chairs Minster parish council and is a keen historian, said: "I am aware of the situation but to all intents and purposes the covered way has been forgotten. Since the coast road was built it now serves no useful purpose.

"To make it safe would cost a lot. The alternative would be to demolish it. It is in such a poor state of repair its historical significance doesn't outweigh the cost of maintaining it. It is history but so was the firing range and that has long since disappeared."

But Cllr Mark Ellen (Lab, Sheerness) said: "I would like to see this historical walkway made safe without demolishing it. Walkers should be made aware of the danger by signage."

Roger Betts, who runs the Sheppey History Page on Facebook and is a volunteer at the Minster Abbey Gatehouse Museum, said: "I’m sorry to hear Ken say that. The covered way, or what’s left of it, could be another window into Sheppey’s past. A plaque with it’s history explained would make a great feature, especially if linked with the Barton's Point Battery

"I agree the covered way no longer serves a practical purpose but then nor does the magazine on the Queenborough Lines or the Garrison Point Fort. We’ve already lost too much of our heritage over the years which is regretted by many Islanders.

"If this was in France it would be repaired and turned into a quirky tourist heritage attraction with information boards at each end."

Swale Cllr Lee McCall (Ind, Sheerness), who is also a member of the Sheerness town council, has reported the state of the walkway to Swale council's building control department. Minster parish council has also lodged a report.

A Swale council spokesman said: "While the covered walkway is in a quieter location in the coastal park, in the short term it is essential to make sure that the structure is safe before considering its significance and future. An initial structural survey has been requested and safety works will be undertaken accordingly."

Blast from the past

The firing range dates back to before the First World War and was later part of the Royal Navy's anti-aircraft gunnery school until the 1950s.

It was operated from Barton's Point Battery which later became the Catamaran Yacht Club. It's control tower is now home to Popeye's beach bar. Remains of the gunning emplacements are still visible and are classed by English Heritage as "rare."

The firing range dates back to at least 1906. But the first mention of the 'covered way' was in 1911 when Alderman A Howe dodged a stray bullet.

He wrote a letter of complaint stating: "Walking towards the shelter of the range, a bullet went whistling past us and struck the iron fence just behind us, quite near enough to be anything but pleasant.

"I have always looked upon that path ever since it was made so very dangerous for the public to have to use it and something ought to be done to make it safe before someone gets killed.

"It is the only walk along the beach to the cliffs and to Minster. The public ought to be allowed to use it without risk of their lives. I think the Rural Council have full power to see that it is protected.”

The letter ended up in the hands of Admiral Sir C C Drury, Commander in Chief at the Nore, Chatham. As a result, the 'covered way' was extended and a sentry stationed at each end to ensure the public went through the shelter in safety.

John Simlett, 82, a former Sheerness Technical School pupil and dockyard apprentice shipwright who now lives in Fishguard, Pembrokeshire, recalled: "If a red flag was flying, one had to use the ‘covered way’ which was a sort of corridor.

"It had a brick wall on the range side, a steel roof and the other side was open towards the sea. It was supposed to keep you from being shot.

"I would always use it with my younger brother Colin as it had great echoes. Wehooted and roared along its length as it dog-legged this way and then that."

Some, like Roger Clark, would run or ride their bikes along the roof. Others, like John McGrath or Julia McDougall, would scour the range for used shells and bullets.

Ben Pointing said: "The 200-yard firing step is still visible and its marker stone is still present. The 900-yard step is still there but the 500, 600,700 and 800 marks were destroyed when the boating lake was dug."

Barton's Point Battery was built in 1890 as part of the Queenborough Lines defences - the canal - to protect Sheerness Naval Dockyard from the French following the Napoleonic Wars.

It was featured in an English Heritage archaeological investigation undertaken by Paul Pattison in July 2001.

He wrote: "Although largely obscured or sealed by the naval structures from the Second World War, three of the 'disappearing gun' pits are virtually complete (Nos I to III), while No IV is partially so.

"Three original magazines also survive in a reasonable state of preservation while a fourth lies buried but presumed intact.

"Nationally, these early purpose-built batteries for 'disappearing guns' are rare although individual emplacements often survive, notably nearby at No 1 Bastion on the Sheerness Lines where a six-inch gun pit survives."

Small-scale infantry defences were established around the battery during the First World War after which it lay dormant until the early 1930s when two artillery searchlights were installed.

In 1938 part of the battery was taken over by the Admiralty and turned into a school for naval anti-aircraftgunnery until the late 1950s when the range was extended further out to sea to accommodate the more powerful 40mm Bofors gun.

Roger Betts recalled: "Air target practice was a common sight over the Island in the early 50s. This involved a plane towing a windsock which was fired at by the range gunners. It could be quite a precarious situation.

"I remember standing in the Delamark School playground watching the target plane flying over with smoke pouring from one of its engines from a misjudged hit. I believe the plane was forced to ditch in the estuary.

"Some of the shells and incendiary devices found on the beach by The Leas over the past couple of years are thought to have come from the range."

Few people have seen inside the battery's underground bunkers but Nick Catford of the Kent Defence Research Group and Kent Underground Research Group went below to take photos of an ammunition bunker built in the 1890s.

By 1961 the site was being used for holiday chalets although the control tour, office block and officers' mess remain.

Other accommodation was sold to the Sheppey Sea Cadets.

Read more: Stories from the Isle of Sheppey here 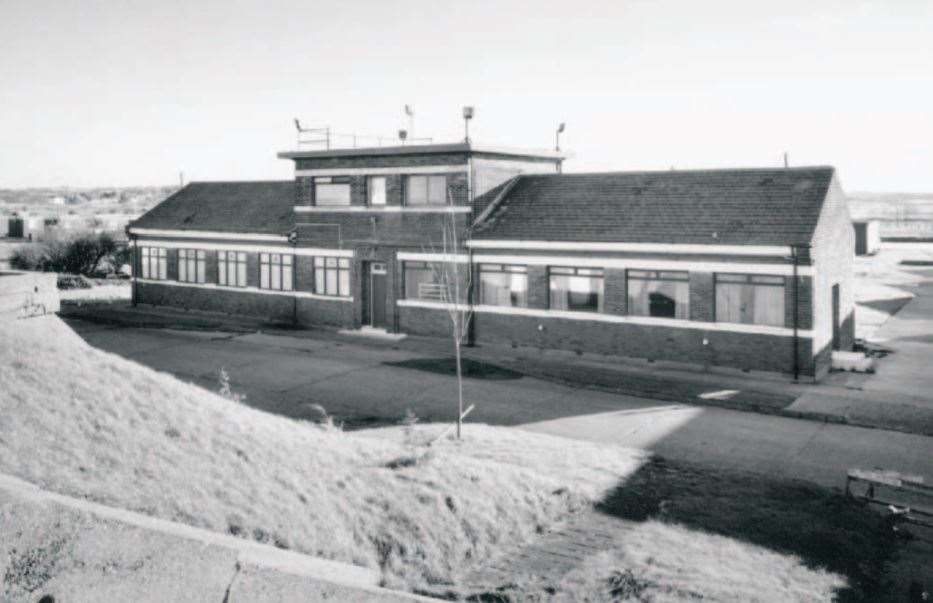 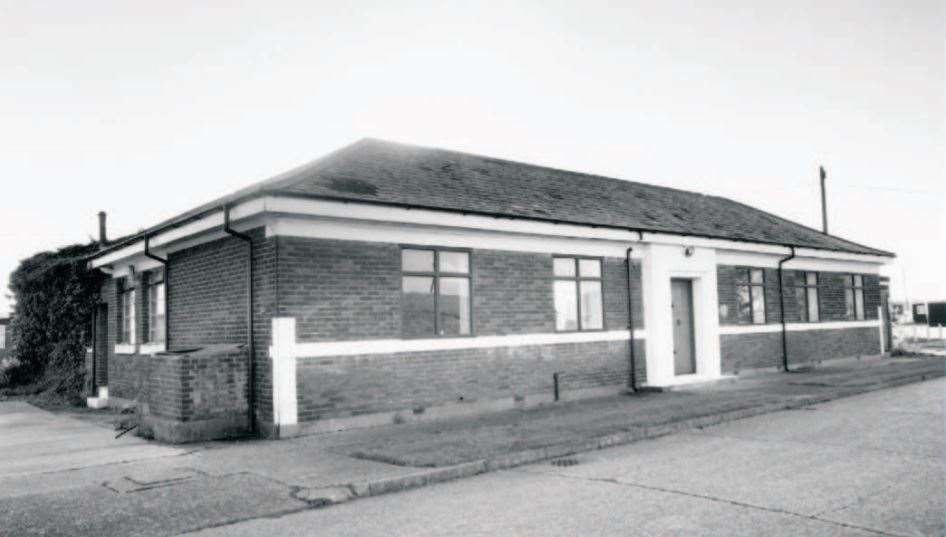 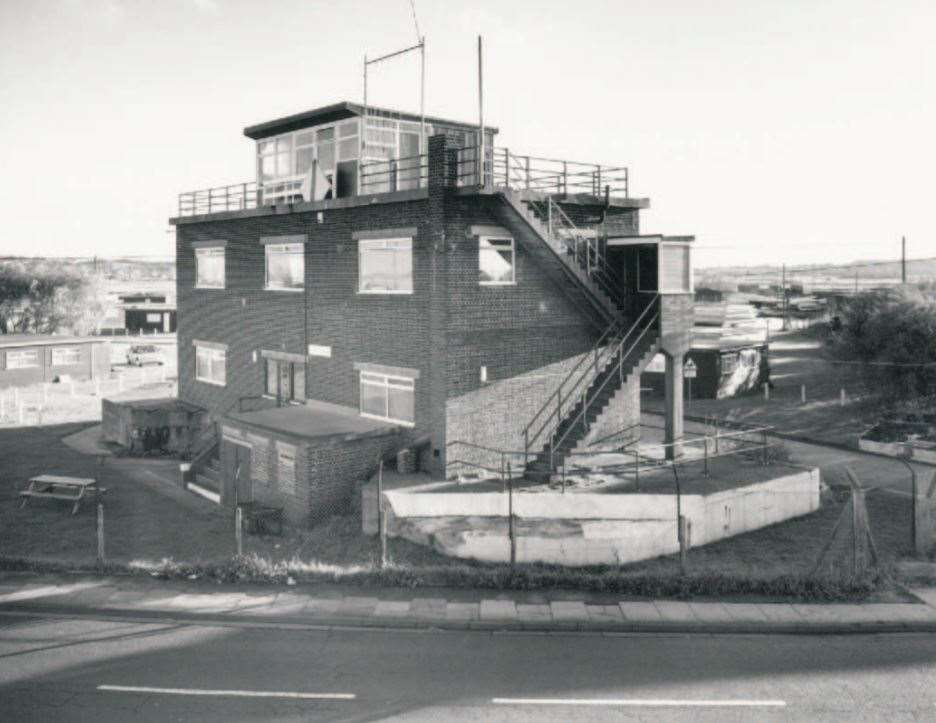