Kent bosses sleep out for homeless

Tea room closes after costs jump by £1k per month

Kent bosses sleep out for homeless

Tea room closes after costs jump by £1k per month

Human remains have been found in the search for missing Sarah Everard.

Police commissioner Cressida Dick has confirmed remains were found in woodland near Great Chart, Ashford, but have not yet been identified.

A serving armed police officer has been arrested on suspicion of the kidnap and murder of missing Sarah Everard - and is also being quizzed over an allegation of indecent exposure.

Tonight a solitary police car is parked on the side road and facing the garage site and police tape can be see around it.

Another police car is also parked in the Centre Road car park on cliffs overlooking Dover Western Docks, not far from the garage.

The derelict BCB, where Couzens worked for 20 years as a panel beater, has been taped off tonight and serious crime officers are searching the site.

The garage closed in 2015 after 48 years of trading with Couzens at the time saying: “He would have really loved one of us to take over but he totally understands.

"Things have to come to an end. I am devastated, I was there for 20 years myself.

"We’ve grown up with my dad always being there. It’s a huge part of our lives. An family institution.”

The land was passed back to the council and has sat disused ever since.

The garden of Couzens' home in Deal has also been sealed off and teams are thought to be digging it up as an abandoned leisure complex is also scoured.

Investigating officers have now confirmed he was arrested just before midnight yesterday on suspicion of kidnap. Today he has been further arrested on suspicion of murder and a separate allegation of indecent exposure.

The 48-year-old father-of-two is a serving officer in the Met's Parliamentary and Diplomatic Protection Command based at Westminster and his primary role was uniformed patrol duties of diplomatic premises.

A 39-year-old woman who was arrested at the house on suspicion of assisting an offender remains in custody.

Following the arrest the Metropolitan Police has made a referral to the Independent Office for Police Conduct.

Couzens, who used to work for the family garage in Dover, was seen being led away from his house in handcuffs just before midnight.

It is believed he became a police officer 10 years ago after work as a panel beater and a spell in the territorial army.

Teams are working at the property in Deal and scouring a sprawling abandoned leisure complex 30 miles away in Ashford.

A tent has been erected outside the father-of-two's terrace home in Freemen's Way and it is thought officers are digging up his garden after hoarding was installed this afternoon.

KentOnline's reporter at the scene said people trying to access the road had been turned round.

A black SEAT Exeo and a second car have been lifted off the drive way and forensics officers are going in and out of the house with a blue tent erected in the front garden.

It is thought one area of woodland being searched is near Betteshanger Park.

A larger search is taking place near Ashford, some 30 miles away from where the officer was arrested.

About 150 officers are scouring acres of land around the abandoned Great Chart leisure complex in Bears Lane, which previously was home to a paint ball site and golf course.

More police vans were seen arriving at the site this afternoon in torrential conditions.

Just after 4pm a forensics van arrived at the scene as a helicopter hovered overhead. 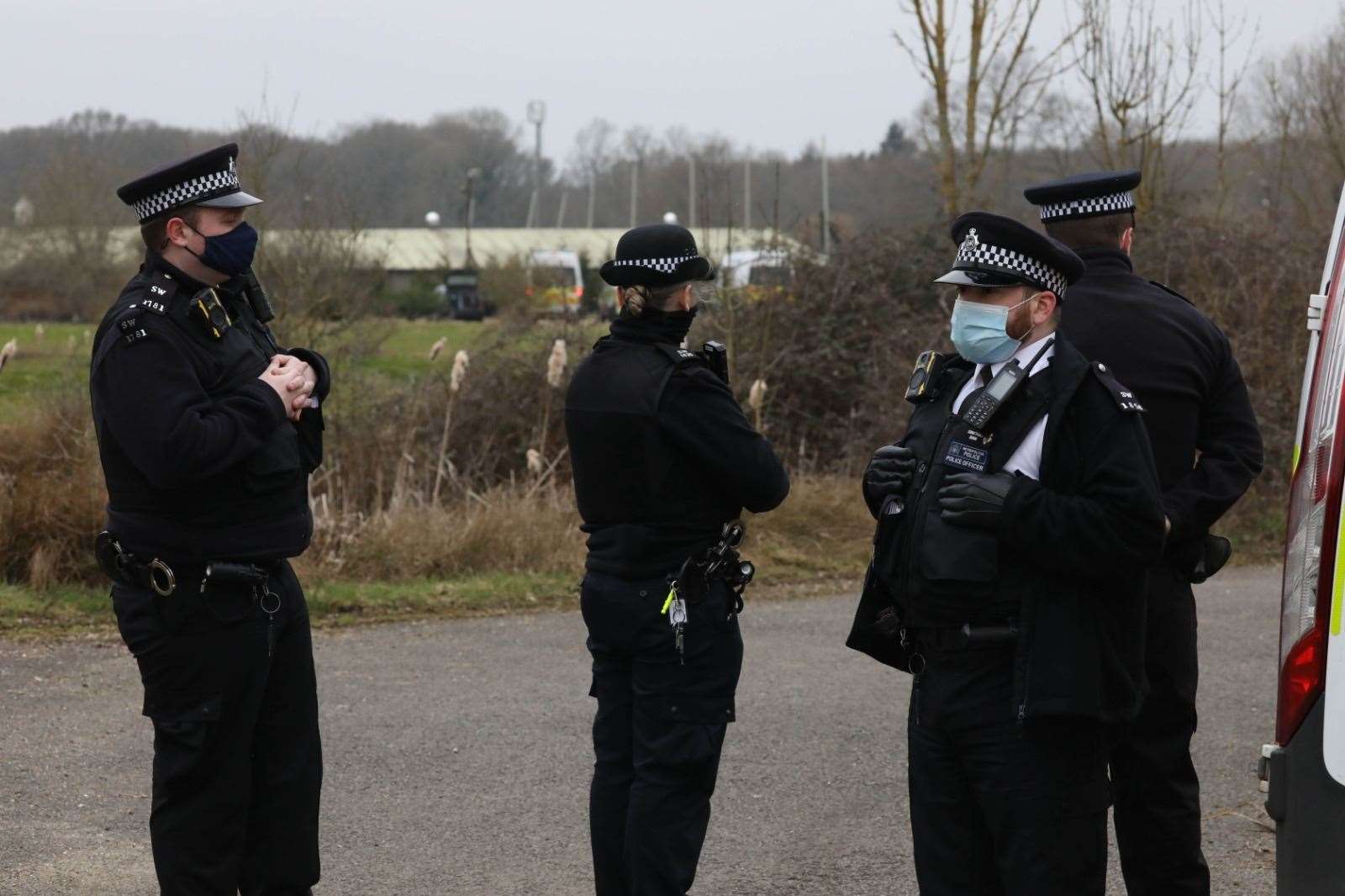 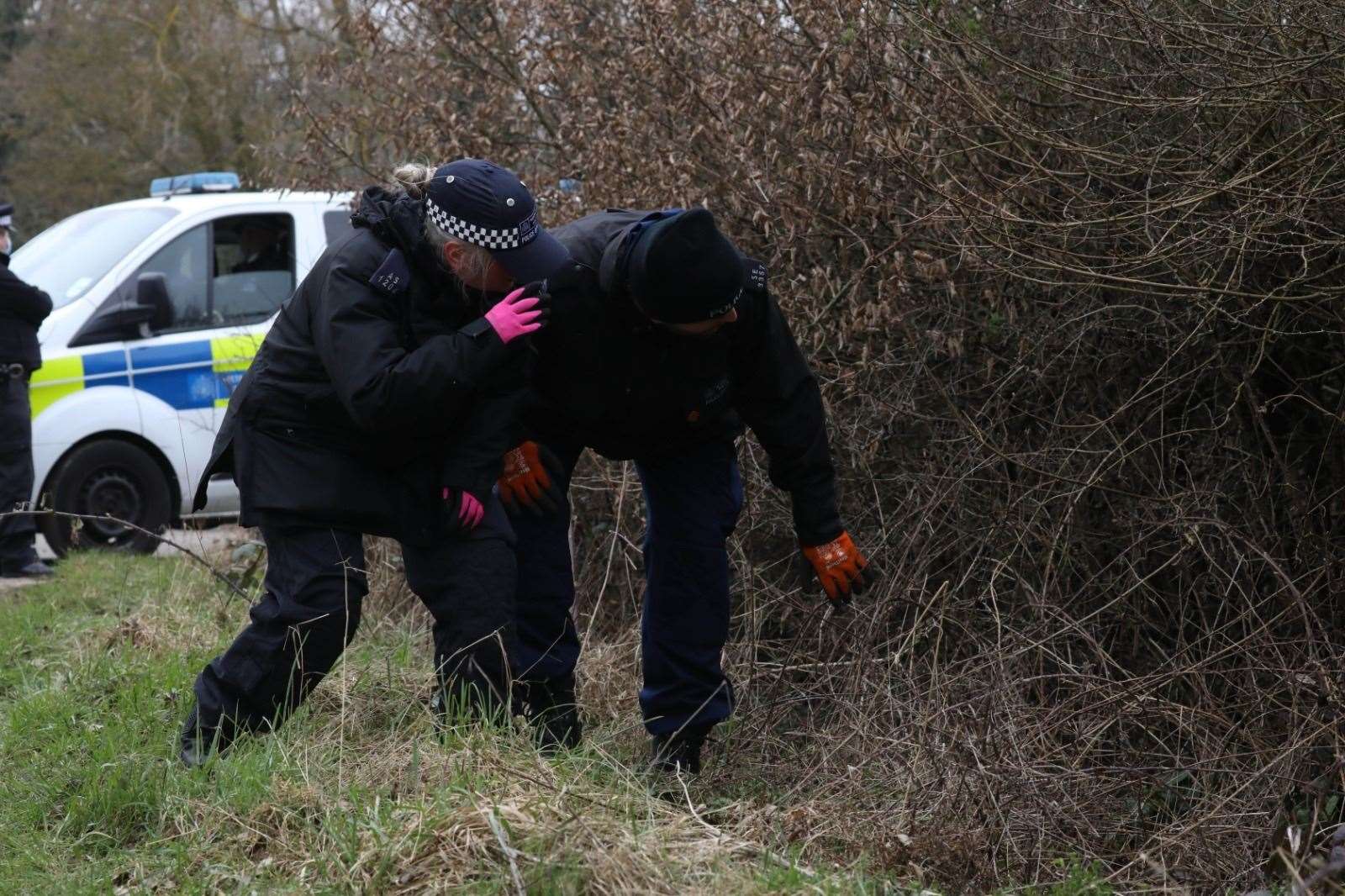 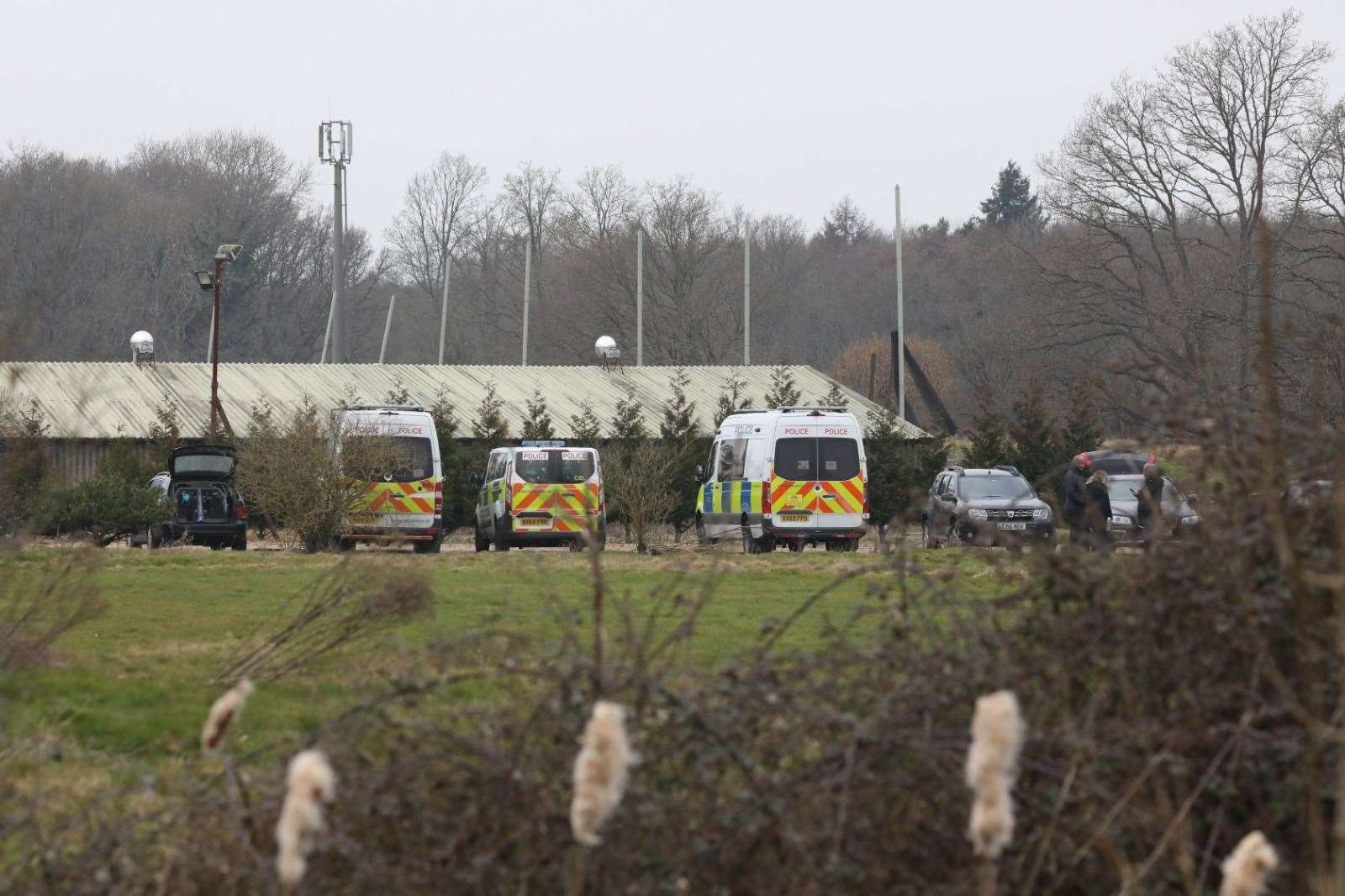 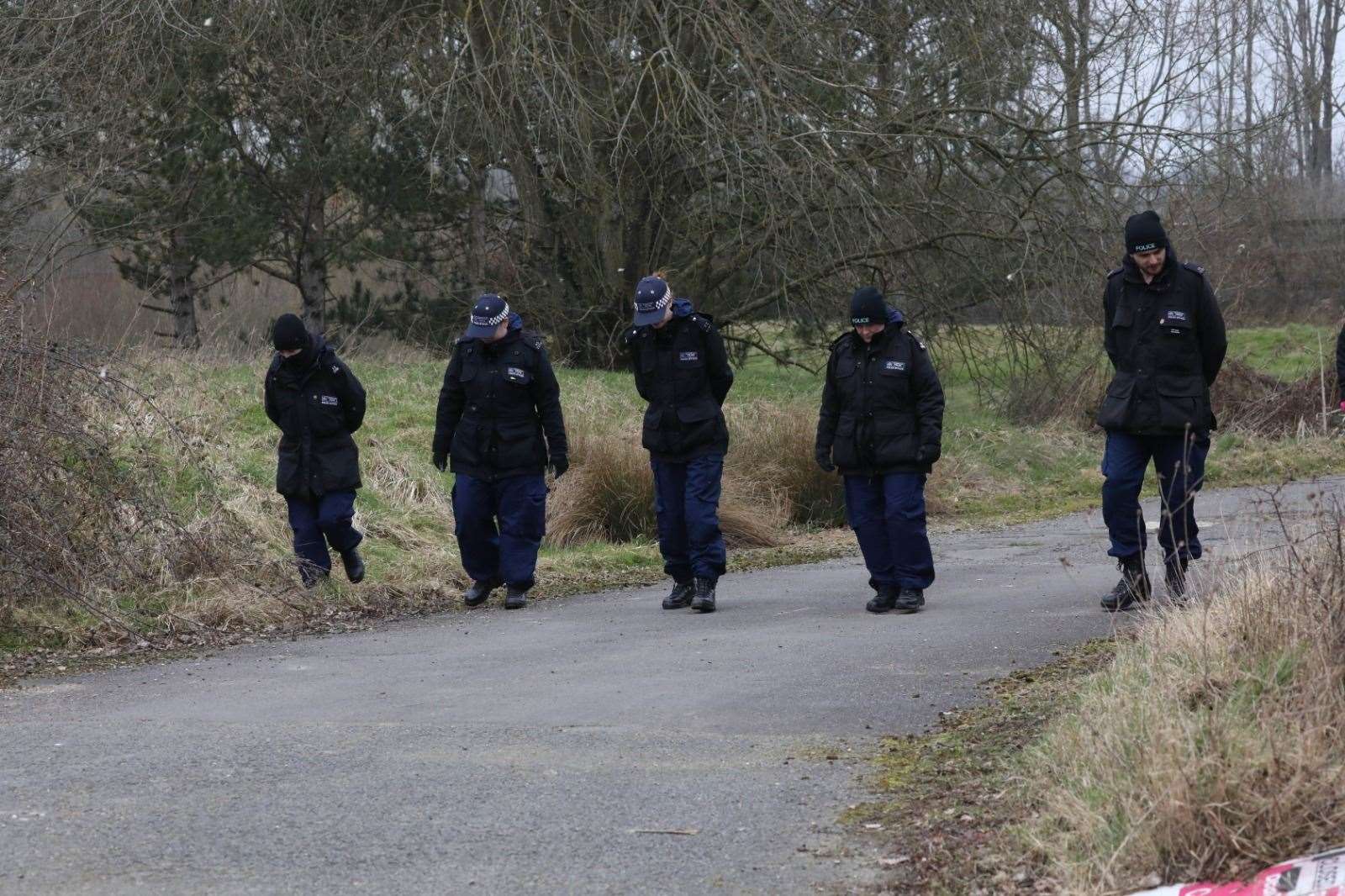 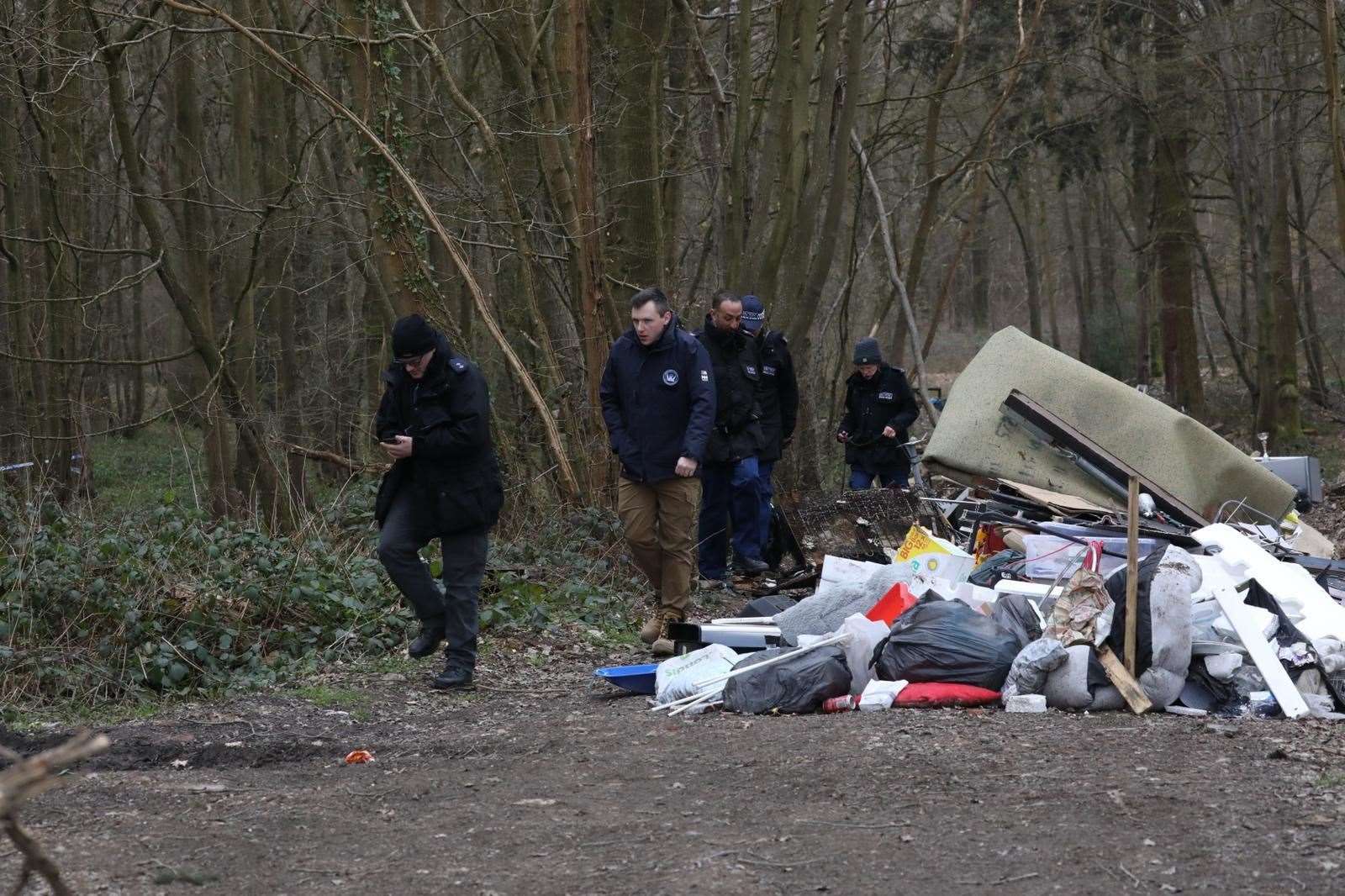 Read more: A timeline of the investigation to date

The Directorate of Professional Standards is aware of Couzens' arrest and Sarah's family has been kept updated of the developments.

Speaking this morning, Met Police Assistant Commissioner Nick Ephgrave said the officer, who remains in custody at a London police station, was not on duty at the time of Sarah's disappearance.

He described the fact the man arrested was a serving officer as "shocking and deeply disturbing", adding: "As a father myself of four young woman I can only imagine the anguish Sarah's family is feeling at this very difficult time."

He did not confirm what the officer had been arrested on suspicion of and this has still not been confirmed.

Detective Chief Inspector Katherine Goodwin, in yesterday's statement, said: “This is a significant development in our inquiry. This is a fast moving investigation and we are doing everything we can to find Sarah.

"We have seen an overwhelming response from the public and I repeat my request for anyone with information that may be relevant to come forward, no matter how insignificant it may seem."

Last night, Mr Ephgrave said: "The arrest this evening is a serious and significant development. We will continue to work with all speed on this investigation but the fact that the arrested man is a serving Metropolitan Police officer is both shocking and deeply disturbing.

"I understand there will be significant public concern but it is essential that the investigative team are given the time and space to continue their work."

Couzens' arrest came later on the same day that the father of Sarah's boyfriend Josh Lowth pleaded for information from the family home in Kent.

Josh's father Chris, who lives in Sidcup, said: "We are concerned, like everybody is. We really, really want to see her back.'

"The whole family is obviously very worried about her and just wants her home safely.

"We're all pulling together and praying that this awful situation is quickly resolved. We want to thank the media for all their help."

Ms Everard is thought to have walked through Clapham Common towards her house in Brixton – a journey which should have taken around 50 minutes.

She was last captured on a doorbell camera walking along the A205 Poynders Road towards Tulse Hill at around 9.30pm.

On Tuesday evening, police put up a cordon outside a block of flats near where the footage was recorded.

The search was focused on the Poynders Court housing complex on Poynders Road, and forensics officers could be seen examining the area.

Sniffer dogs were also used to search the nearby Oaklands Estate and gardens in surrounding streets, while other officers were lifting covers and searching drains along the A205.

The Met said it had received more than 120 calls from the public and had visited 750 homes in the area as part of the investigation.

At about 5.40pm this evening, offices searching the woodland in Ashford lit floodlights to help with their searches as their investigations continue.

TV crews and other news journalists are still at the scene in Ashford this evening, and activity is continuing as the light dwindles as more police vehicles enter the site.