Your location is set to Tonbridge

Your location is set to Tonbridge

Disruption continues across the county this evening as a result of high winds from Storm Ciara which are expected to last until at least 9pm.

Motorists throughout Kent are being warned by highways chiefs to take extra care when travelling on the roads, with two major routes shut due to the extreme weather, while Channel crossings have also been suspended as the Port of Dover has closed.

Drivers travelling between Kent and Essex have been facing delays since before 7am, as the gusts have forced the closure of the QEII Bridge at the Dartford Crossing.

Traffic was being held on the M25 this morning to allow a diversion to be put in place through the east tunnel and long delays still remain in the area. This evening the M20 near Maidstone had to be closed for repairs.

At around 10.30am, the Sheppey Crossing was also closed, though Highways England were hopeful the bridge could be reopened around lunchtime, but it is still closed this evening.

There was also disruption on the M20, as a lane was closed on the London-bound stretch between junction 9 for Ashford and junction 8 for Maidstone due to a fallen tree, but this has since been cut back, while there have been delays on the A20 near Capel-Le-Ferne after a lorry flipped over.

Meanwhile, the Port of Dover has was closed and services were suspended earlier in the morning, but at 8pm this evening it was

announced the port has now re-opened for ferry crossings.

A spokesman said: "Passengers are advised to check with their ferry operator before sailing.

"We are monitoring the weather situation closely and liaising with ferry operators with the aim to re-open the Port once it is safe to do so.

"We apologise for any delays or inconvenience as a result of this closure but you will appreciate that the safety and security of everyone is of the utmost importance.

"All customers are asked for their full co-operation and support."

Rail operator Southeastern has also warned of a revised timetable and disruption that is likely to last throughout the day, and potentially into Monday morning, as a result of the extreme weather. 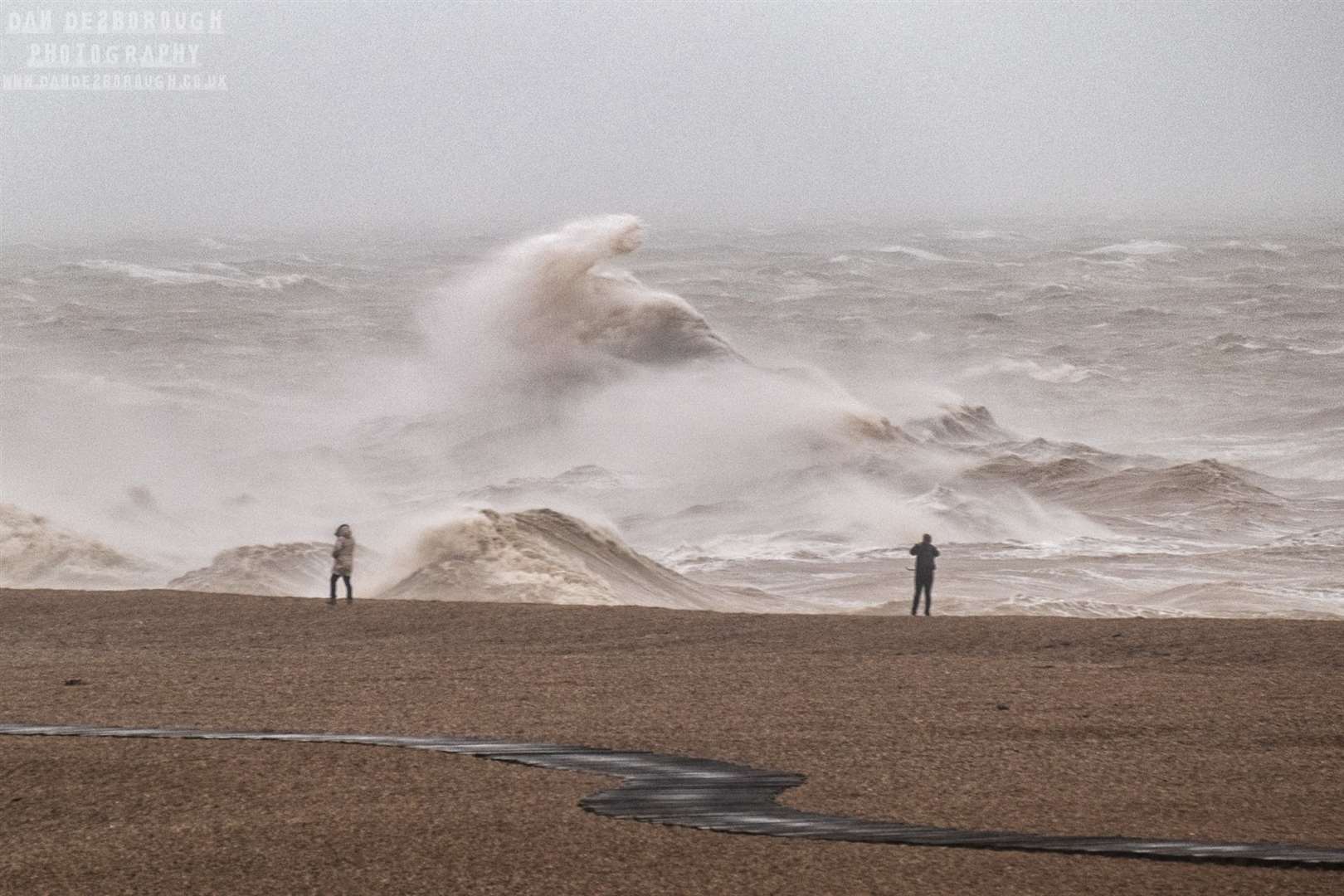 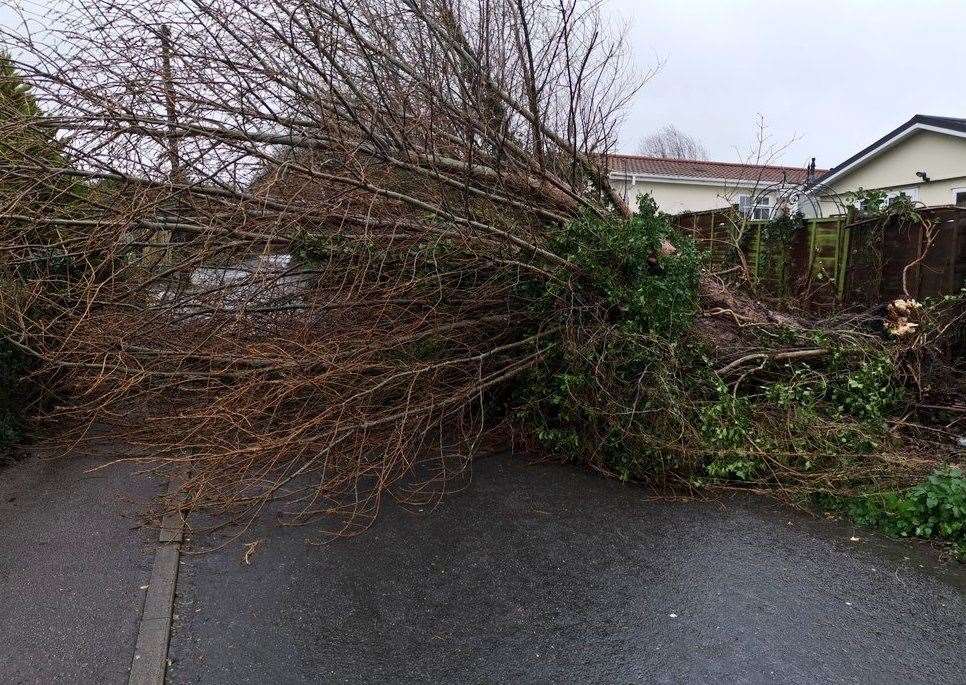 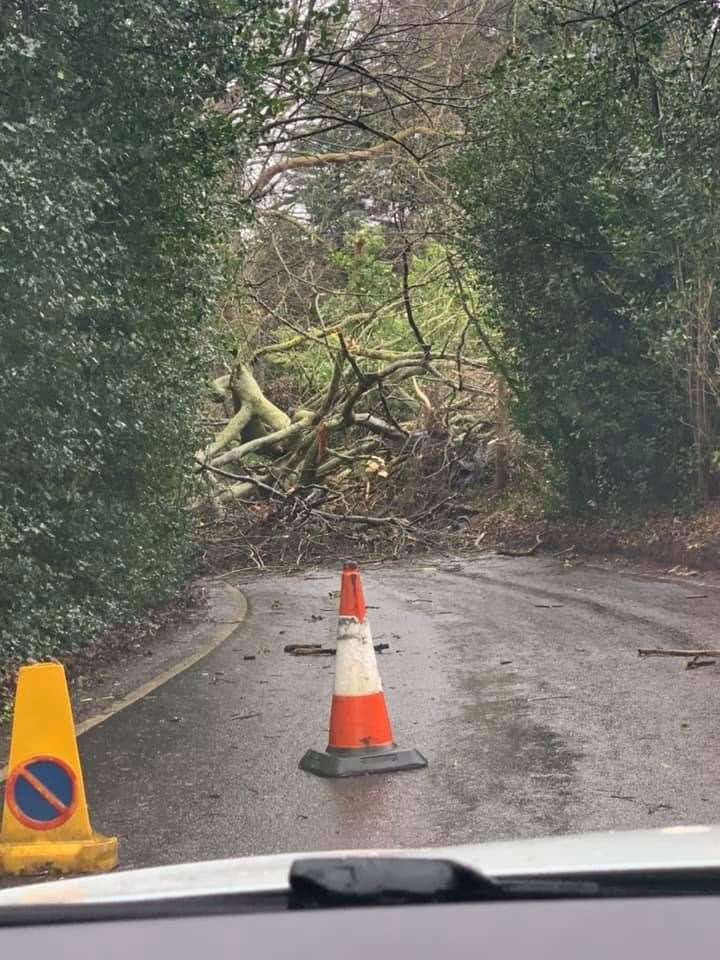 Trains were unable to run earlier from Sevenoaks towards Orpington because of a trampoline on the line at Chelsfield, though services have now resumed in both directions.

There have been delays in Rainham, due to damage to the level crossing barriers, and fallen trees blocked lines at Meopham and Teynham, while trains towards Sittingbourne are unable to stop at Newington because of a signalling problem.

The company pleaded for patience from passengers on Twitter, revealing the account was receiving four times as many messages as usual from customers asking if particular services were affected.

Arriva, meanwhile, has said all services operating from the Gillingham depot, including the 101, will be using single deck vehicles "for the safety of our passengers and staff".

It is not just travel that has been impacted, either, as a host of the county's biggest visitor attractions including Rochester Castle and Leeds Castle in Maidstone have had to close all day.

Shoppers at Asda in Greenhithe have been told to use the rear entrance to the store for safety reasons after gusts blew some tiles off the building, while a leisure centre in Sittingbourne has also shut, after suffering what appears to be severe damage to the roof.

In Maidstone, the local authority has said its parks will be locked throughout the day, while Kent County Council and Medway Council have confirmed all Household Waste Recycling Centres have had to close.

A spokesman for KCC said: "The safety of staff and residents is our priority. Apologies for any inconvenience caused."

There have also been heartwarming scenes of the community rallying together to help, such as in Folkestone where a winter shelter for the homeless is to open five-and-a-half hours early this afternoon to help keep as many people safe and warm as possible.

Today's disruption comes as the Met Office issued an amber weather warning for the county due to the arrival of the storm, with winds of up to 80mph predicted by forecasters.

A main road in Medway has also been closed this afternoon after a tree fell.

And a car was crushed and a van damaged after part of a building collapsed in Folkestone.

A train has also had to be evacuated after it hit a tree on the line in the Swanley area.

At about 5.45pm the M20 had to be closed in both directions between junction 5 for Aylesford and junction 6 for Maidstone to allow an urgent repair after a lamp post fell down.

Highways England said motorists would face delays of at least 15 minutes covering several miles of the motorway. The full road closure is due to the infrastructure repair and resources have been deployed to restore normal conditions as soon as possible.

For traffic approaching the closure locally, motorists are advised to expect disruption with extra journey time and may potentially have to re-route their journeys.

If travelling towards this area from other areas, motorist may wish to change their strategic route, allow extra travel time and follow guidance from on-road variable message signs and media.

Traffic is able to exit and follow the distrubutor link road between both junction 5 and junction 6 which runs parallel to the M20 in both directions.

Elsewhere the A20 at Harrietsham has flooded in parts with with disastrous results for one driver, as captured here on video by Mark Davies.

@Kent_Online A20 Harrietsham flooded with disastrous results for this poor motorist. Police on scene pic.twitter.com/GsPUqAAcHF

Flood warnings have also been issued for the upper River Medway, and the River Medway from Hampstead Lock at Yalding to Allington Lock, including East Farleigh, Wateringbury, Teston and Teston Park, Tovil and Maidstone including Millennium Park.

Flooding is also possible long the coast from St Margaret's at Cliffe, Dover, Folkestone and Sandgate as well as Ramsgate to Kingsdown including Sandwich and Deal.

And at The Rivers Eden, Eden Brook and Kent Ditch from Blindley Heath to Penshurst including Edenbridge and Hever.