A Kent farming expert believes new figures revealing the number of reported dog attacks on sheep could only be the 'tip of the iceberg'.

It comes after a Freedom of Information request (FOI) to Kent Police disclosed almost 100 reported incidents across the county over the last three years.

The attacks, which equate on average to one incident every nine to 10 days in Kent, are often referred to as sheep worrying.

Watch our report on sheep worrying

The incidents can sometimes involve frightening several ewes at a time, meaning farmers across Kent are left picking up the pieces with their distressed and sometimes fatally injured animals.

Of the 99 reported attacks, the Ashford area was found to have the highest number of reports with 22 in total between January 2016 and December 2018.

Scroll down for our interactive map of statistics in the county

This was followed by Maidstone with 20 and the district of Folkestone and Hythe, formerly known as Shepway, with 13.

The year with the highest number of reports was 2016, with 39 incidents in total.

Amanda Corp, Kent county adviser for the National Farmers Union (NFU) said: "The number of dog attacks on livestock remains high, with distressing consequences for both farmers and dog owners whose pet could be shot if it’s caught in the act.

"Most attacks are completely preventable, so we are appealing to dog owners to keep their dog on a lead around livestock and check that their properties are dog proof.

"If chased, pregnant ewes can commonly lose their lambs or die from stress and exhaustion.

"These figures may only be the tip of the iceberg as many dog attacks on sheep, in particular, go unreported and sometimes undetected."

Ben Corrie, a farmer near Folkestone, echoed this: "I was expecting the statistics to be higher, to be honest. It does surprise me.

"I think a lot of traditional farmers don’t bother reporting it as they possibly think the police won’t do anything."

Even if a dog doesn’t make contact with livestock - which can result in horrific and often fatal injuries - the distress of the chase can cause sheep to die and miscarry their lambs.

The peak time for attacks is during lambing period between January and April, which coincides with the time more families visit and stay in the countryside.

Mr Corrie took to Facebook in February to urge dog walkers to keep their pets on leads in the countryside, following attacks on his flock.

The 29-year-old, who rears the animal at Frogholt Farm, in Frogholt just outside of Newington, found the shocking sight of a pregnant ewe with bites.

It comes after more of his sheep were targeted in November. The ewe was treated by a vet, but it was expected she would lose her lamb.

The first generation farmer said at the time that the onus falls on pet owners: "It seems they just think their dogs are better behaved than they actually are.

"It's a dog's natural instinct to chase a prey animal but people that have them as pets, it seems, don't realise that. I know a lot of dogs are just there for the chase, but it's whether or not it turns into an attack.

"It's down to the owners to control their animals."

Fortunately, the matter was resolved civilly after officers from the Kent Police Rural Liaison Team spoke to both the farmer and the dog owner. 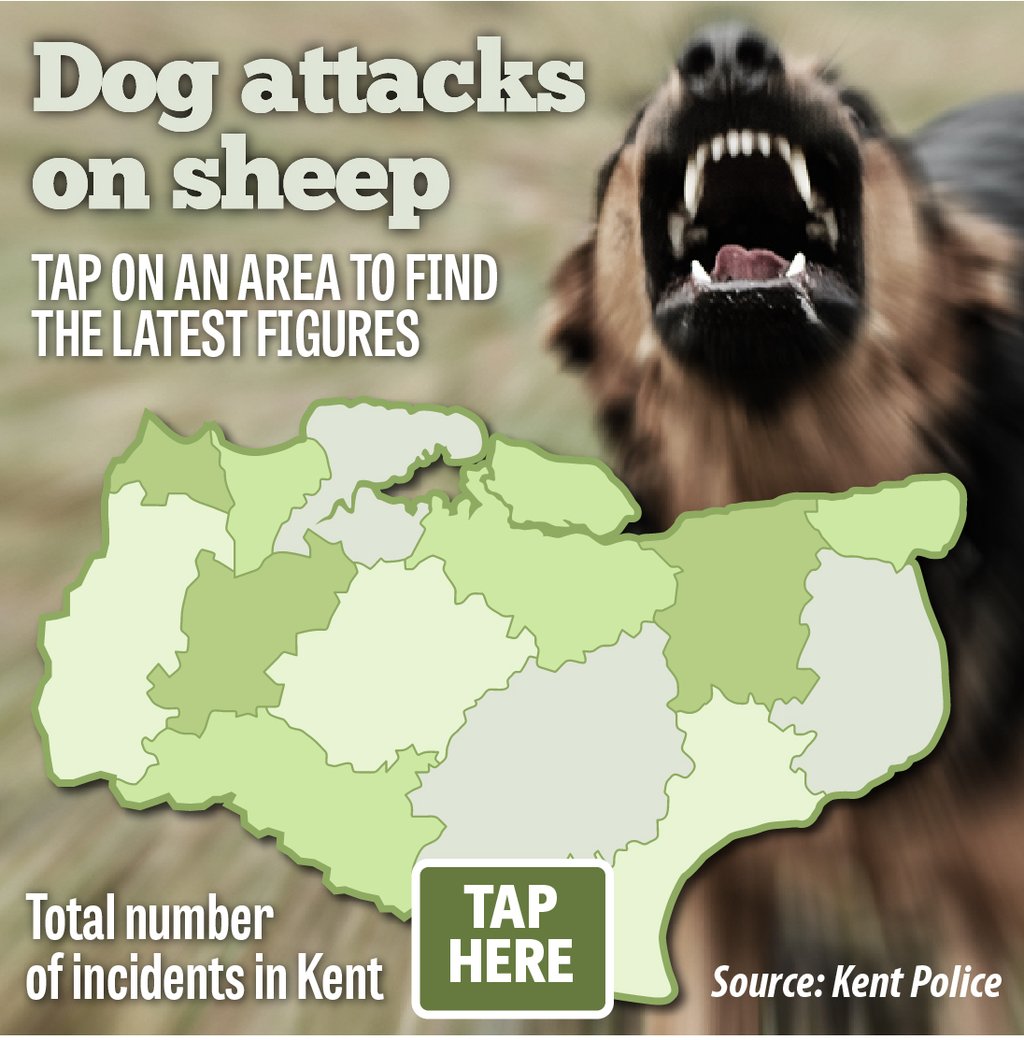 But Inspector Dave Smith of Kent’s Rural Task Force said legal action would not be ruled out: "It is an offence to allow a dog to worry livestock and dogs should be kept under control at all times. Sometimes even the friendliest dogs can attack livestock when their instincts kick in so it is important that owners are vigilant.

"Farmers are within their rights to shoot a dog if it is thought that it is the only way to stop it attacking their livestock.

"In addition to the financial implications for the farmers dogs attacking livestock can inflict horrendous injuries on sheep and cause pregnant ewes to miscarry.

"We will investigate cases where dogs are injuring livestock and, when possible, put those responsible before the courts."

Farmers are often left with huge bills caused by dog attacks on their livestock, with cattle and sheep worth more than £400,000 being savaged by dogs in the last four years across the South East.

According to recent research from Rural insurer NFU Mutual, 87% of dog owners exercise their pets in the countryside, with more than 60% letting them roam off the lead.

If there is a sign warning dog owners that livestock are in a field, more people 95% are putting their dogs on the lead than in 2018, when it was just 90%, but it also reveals one in six owners admitted their dog had escaped from home.

Rebecca Davidson, rural insurance specialist at NFU Mutual, said: "For the South East’s small farmers in particular, livestock worrying is devastating because it has a huge impact on their livelihood.

"While insurance can cover the cost of replacing stock killed and the treatment of injured animals, there is a knock-on effect on breeding programmes that can take years to overcome.”

Additionally, the RSPCA advise dog owners to consider professional help. The charity's advice on the National Sheep Association website states: "It is important to train your dog in order to keep it under proper control when out in the countryside. Good training reduces the risk of your pet worrying sheep and means that you can feel confident when enjoying a walk with your dog.

"As well as ensuring you have control over your dog, training has lots of other benefits. It provides your pet with mental stimulation and social skills, and can be a good opportunity for you and your dog to get to know each other. RSPCA recommends reward-based training from an early age.

"Anyone can call themselves a dog trainer, regardless of whether they have the necessary skills to do a good job.

Bad training can be harmful to a dog and cause behavioural problems, so it’s a good idea to look for a trainer who is accredited by the Association of Pet Dog Trainers UK."

Escaped animals, unusual finds and news from the RSPCA can all be found here.