Victory parade for the mighty Gills 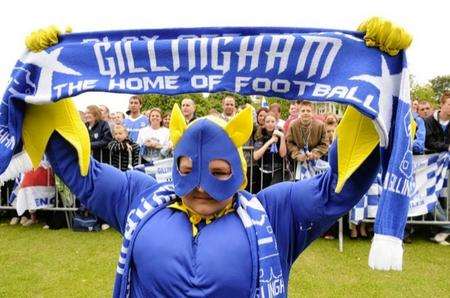 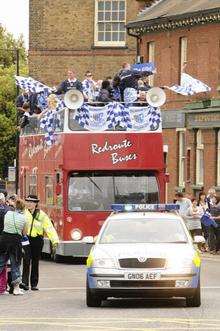 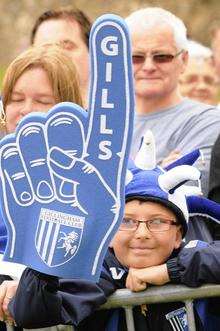 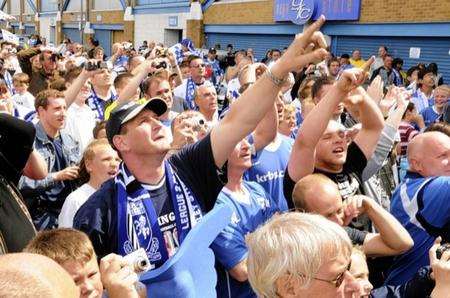 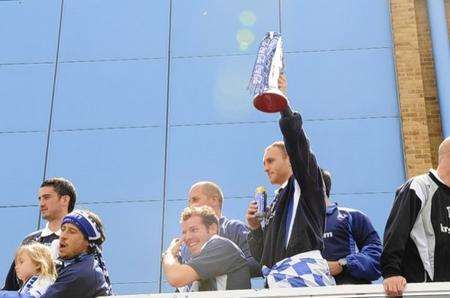 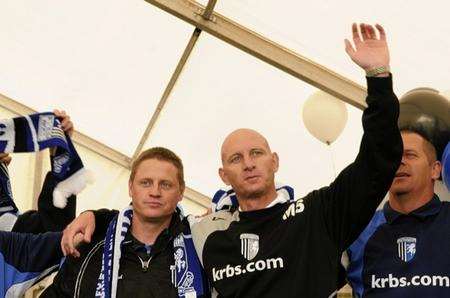 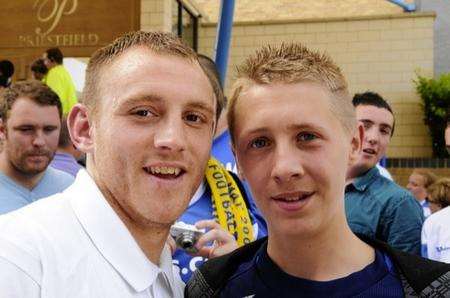 The streets of Medway were awash
with blue and white Gills shirts and flags as fans gave a heroes’
welcome to their team.

The mighty Gills players went on a
victory parade through the Towns on an open top bus today after
securing promotion to League One on Saturday.

Thousands of people went along to
watch them on the parade, which started off from Rochester
Castle.

The castle's gardens were packed
with fans singing their favourite Gills anthems as the boys made
their way to the stage to show off the cup.

The players, who took their
children on stage with them, were joined by manager Mark Stimson
and chairman Paul Scally.

Many of the 35,000 fans who made
the trip to Wembley turned up for the parade, with their faces
painted and still jubilant about their win.

One man in the crowds who was
probably more proud than most was Mark Stimson’s dad, Steve.

Steve who is from Harlow, said: "I
always believed, never doubted and was at the match on
Saturday.

Video: Watch Patrick
Gearey's report on a day of celebrations in Medway

"I’m a very proud parent today,
Mark and the team and all the staff have put in 110 per cent to get
where they are, it’s an outstanding achievement.

"I really am proud of him, it’s
brilliant."

The team were congratulated on
stage by the Mayor of Medway, Cllr David Royle, before making their
way to the open top bus which took them around the Medway Towns,
through Strood and back into Rochester and through Chatham and on
to Gillingham.

The route was dotted with fans
waving their flags and banners and cheering loudly.

One fan, Gary Lamb, 34, said, this
is the icing on the cake, Saturday was brilliant, and this is a
great send off.

"We are going all the way up."

Another dedicated fan was
16-year-old Jake Day, from Strood.

Jake started running alongside the
bus at Rochester Bridge and kept running all the way to
Brompton.

Chairman Paul Scally was so
impressed he got the bus driver to stop and to let him on and join
the players.

Afterwards, Jake said: "I’m very
tired but it was well worth it.

"The players were lovely and I
couldn’t have had a better day.

As the bus neared Priestfield and
entered Redfern Road, it was mobbed by the crowds and had to stop
for a while before police could move people to the side of the road
to let it pass.

At the stadium gates the players
greeted the fans by giving away shirts and scarves, before signing
autographs and making their way inside.