Margate celebrates Dreamland opening - here's everything you need to know

Dreamland is seeking to reclaim its place as the jewel in the crown of Margate attractions, hoping to enthrall a new breed of holiday makers with a knowing nod to the past.

The amusement park is far from a simple exercise in nostalgia.

The rides and attractions present snapshots of past glories, viewed through the lens of Margate's reinvention as a town that's creative, quirky and fun.

Billed as a re-imagined seaside amusement park for the next generation, there is plenty to keep families entertained, with the first of a planned four phases offering rides, sideshows and a roller disco.

But the intention is to offer more than an amusement park.

Competition: Win VIP passes for a family of four

Over the next three years, future phases will include a nightclub, a 1,600-capacity hall, an large outdoor event space and an education centre, to name but a few of the planned additions.

And this barely scratches the surface - the vision is nothing if not ambitious.

From traditional gallopers and helter skelters to the knuckle-whitening Jumping Tower and Cyclone Twister, phase one will introduce more than 17 rides and a roller disco.

For younger thrill seekers, The Counter Culture Caterpillar Coaster will offer a child-friendly experience, and at the far end of the park is the Dreamland Pleasure Garden, set back from the rides where visitors can steal a moment on the lawn, take in a Punch and Judy show, and witness the the Wall of Death.

Like the rides, Dreamland’s amusements will present the evolution of the arcade from traditional carnival sideshows to a contemporary roller disco and modern circus performance.

A number of stalls will serve seaside favourites, from fish and chips to candy floss, while a family entertainment area will offer daily activities for young children.

Also included in phase one, but opening later this year, is the Scenic Railway, the iconic centrepiece of the park. 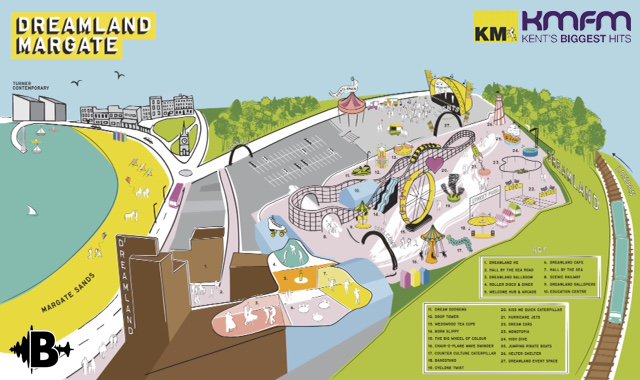 Click on the image above to hear more about Dreamland

Tonight's Dreamland Opening Night Hullaballoo is headlined by Marina and the Diamonds, with Vic Reeves acting as host.

Cockney legends Chas and Dave will be returning to their roots with an old fashioned knees up at the Pleasure Garden’s Stage, celebrating their 50th anniversary with classics including, obviously, Going Down to Margate.

But before the cockney duo, festival favourites The Miniscule of Sound will be ‘avin it tiny at the world’s smallest nightclub.

The roller disco will feature retro hip-hop duo Too Many T’s, who will take skaters from the 80s to the present day.

Local on the day discount

The UK’s oldest rollercoaster will open later this year in 2015, the culmination of a massive project to recreate the grade II listed attraction.

Dating back to 1922, this traditional four-abreast ride has been hand restored and offers perhaps the ultimate retro amusement.

Another classic, the giant slide is a replica of the famous 1920’s version complete with big colourful stripes, retro signage and coconut mats to help you whizz round bends.

The Kiss Me Quick Caterpillar

The undulating track of the Kiss Me Quick Caterpillar takes couples on a ride through dark tunnels.

Two merry-go-rounds one on top of the other the Double Decker offers cars and motorbikes downstairs and brightly coloured rockets on top.

Dan Dare style Hurricane Jets, controlled with a quick flick of the joystick.

Originally premiered at Butlin’s this enduring fairground scream machine is once again resplendent in all its post-war glory.

The quintessentially English teacup ride has been decked out in the blue and white colours of world famous British ceramics company Wedgwood.

The Waveswinger is a 1970s classic featuring a rotating, titling carousel that will twirl passengers over the heads of the crowds.

A people-powered monorail with Jetsons-style cars running running along an elevated circuit, providing a tree-top view of the whole park.

Perhaps the best known of all amusement park rides, the dodgems have been around since the 1920s but Dreamland features 70s themed cars that hark back to a time when punks and art rockers locked bumpers on the track.

The ferris wheel offers the greatest view in Dreamland and might be even better when the sun goes down.

This figure 8 rollercoaster has been been put back together to appeal to younger thrill seekers. The ride is set to a soundtrack of classic pop re-imagined by John Shuttleworth.

The slide offers a choice of four 65 metre undulating lanes to launch yourself down.

These leaping galleons jump into the air at random, recreating a 90s favourite.

The tower is billed as Dreamland’s "adrenaline pumper", aimed at those who like rides of the white-knuckle variety.